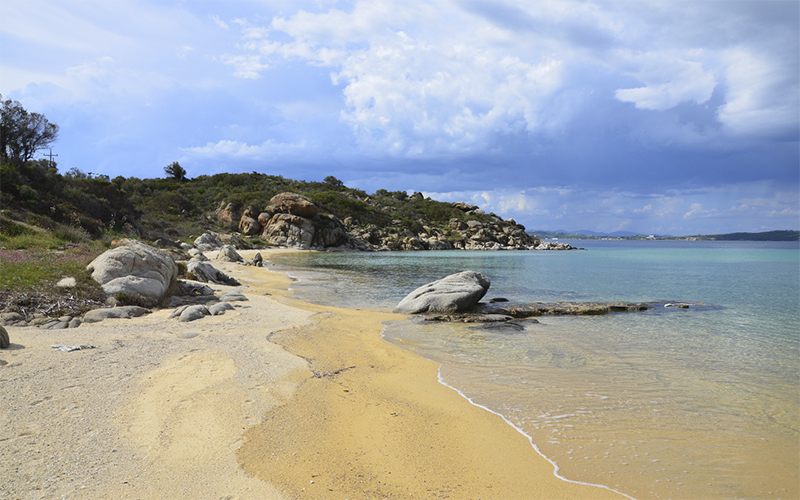 An islet, left in the virgin beauty of nature. Surrounded by the turquoise waters of Agion Oros, with the gaze on the imposing peak of Mount Athos, Ammouliani is a Lilliput  Paradise!

It is an oasis with hidden beaches and deserted islands dedicated to those who seek exploration and absolute escapism. Far from the crowd and cosmopolitanism, Ammouliani has the privilege to convey to you the tranquility and the inexplicable sense of carelessness. 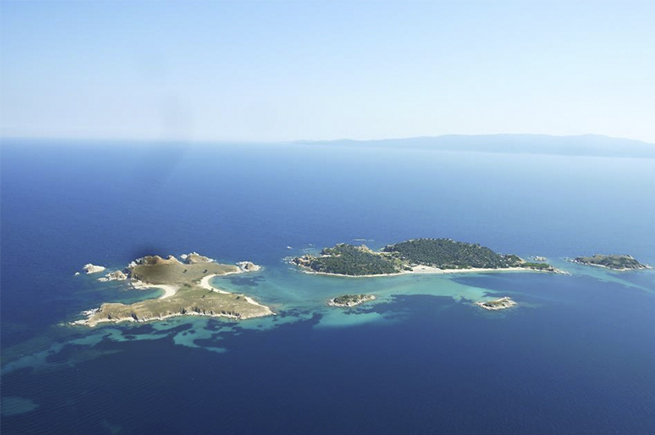 How to get there:
From Thessaloniki you will reach Tripiti through N. Moudania, Gerakini, Nikiti, Ag. Nicholas, Pyrgadiki, Gomatiou. From there, ferry boats depart regularly to Ammouliani. The trip lasts 15 minutes. Thessaloniki-Tripiti: 120 km

Could you ever imagine that everything you dream of, you can find within 4.5 kilometers? Personally, I would be skeptical if I did not see it. But then, after I had a fantastic weekend in Ammouliani, the only habitable island of Halkidiki, I confirm the well-known saying that "expensive perfumes are in small bottles".

After arriving at Trypiti, a few kilometers away from Ierissos and boarding on the ferryboat, it is hard to imagine what one can expect. A little scattered information, as that the island is small and quiet, was not able to forewarn us enough. The decision to take only a few things in our luggage, though subconscious, proved to be wise. It will be proved, that only the most necessary clothes and accessories, for the endless hours at the beach, are more than enough. In Ammouliani, you feel like you are in your home or, better, as if you have found the "home" of your dreams and you can finally be yourself. 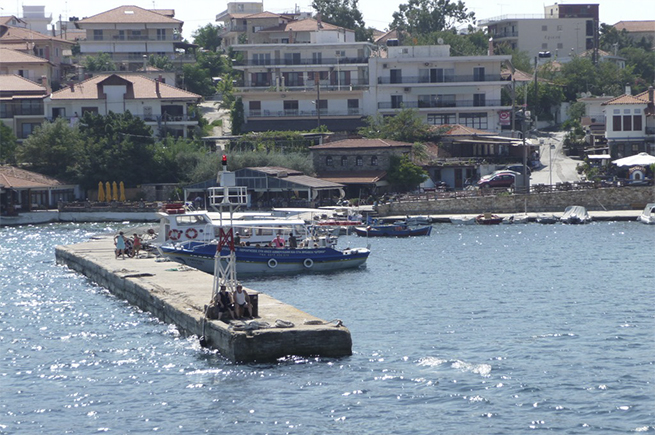 As the ferry boat crossed the blue waters of Siggitikos Gulf, we stood on the deck to see the island popping up. It didn’t take long, since the trip was very short. It only took 15 minutes, as Tripiti is two miles away from Ammouliani. The low hills of the island emerged from the surface of the water and the white village gave us its clear and humble appearance. We got out from the ship and stood at the harbor, where our eyes caught all sort of colorful boats around us. The journey to the terrestrial paradise was about to begin. Several years ago, in Ammouliani, there were no asphalt roads and only a very few cars. On its dirt roads one would only meet two-wheelers. The past 30 years the situation has changed radically and cars go almost everywhere. The dirt roads that remain - fortunately - on the island are more comfortable with a four-wheel drive vehicle. The 4x4s therefore are more suitable. The wildest and most exotic beauty of the island is preserved because of the dirt roads. Otherwise the island would have probably lost the charm that is hidden in its distant corners in the name of mass tourism. However, the capital of the island has not remained unchanged. 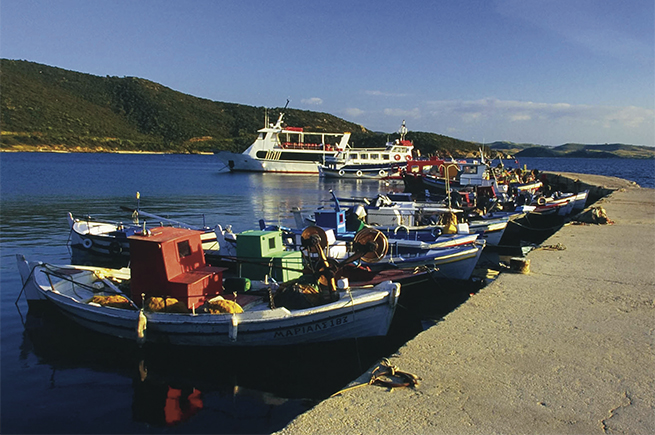 Along the old picturesque houses, which have remained since the colonization of 1924, new houses and abundant accommodation have sprung up, while on the beach the taverns and cafes complement the modern image of the island. We cannot wait to taste the flavorful temptations of Ammouliani: fresh fish and seafood, fished from the Gulf of Mount Athos (or Siggitikos) by the locals. Apart from fishing, tourism is one of the main occupations of the inhabitants. Fortunately, the permanent population turned to tourism and the island was kept vivid. After all, systematic crops do not take place, so the ecosystem remains untouched.

Low hills and small valleys make up the landscape while the island is full of olives and low vegetation. After a delicious meal and a good dose of caffeine in one of the beach cafes, we started our walk in the harbor. Along the coastal area you will find not only well-kept taverns and café-bars, but also picturesque little shops with hospitable and cordial people who welcome you. Here you will also see the old “arsana” - a typical sample of Mount Athos architecture - where the monks protected their boats. This stone building, unfortunately, is one of the few remnants of the island's past and today it is a cafe. Walking up at the square, we also admire the picturesque church of Agios Nikolaos built in the late 19th century. 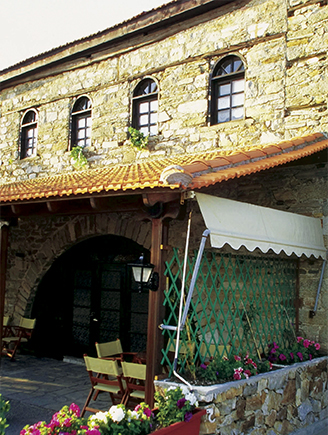 The beautiful building of the old arsana, built in 1860, adorns the harbor.

The quiet settlement is built on a hillside and walking in the alleys you can discover the whitewashed, flowered courtyards and the low houses or you can find yourself in front of an exceptional panorama from where the sea surface unfolds against the imposing volume of Mount Athos. As the sun paints the horizon purple, the majestic peak of Mount Athos seems to lose a bit of its wild, inaccessible face. The idyllic atmosphere that it exudes soothes the soul and the spirit. 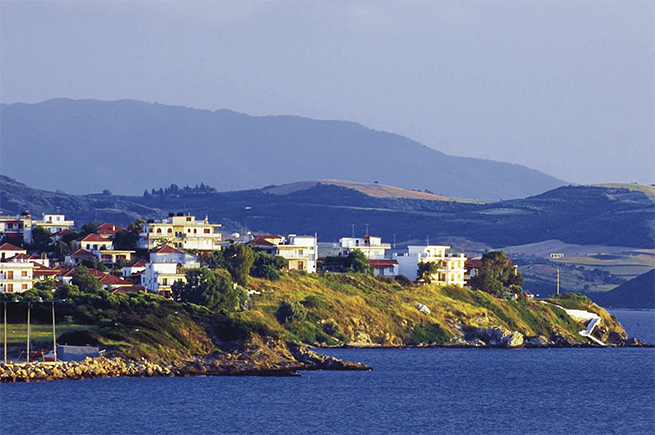 The settlement of Ammouliani is built on a hill.

Obviously, you have already realized that Ammouliani is an unexplored treasure. It is the paradise of those who seek quietness and relaxation and dislike the crowd, cosmic life and swimming in bustling beaches. If you belong to this category and in particular, if you like adventure and deserted landscapes, then this trek is for you. 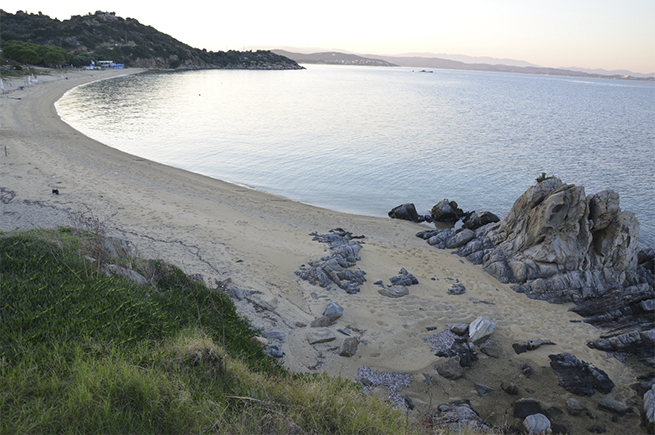 In order to have the whole picture of this place, it is enough to know that Ammouliani has only one central asphalt road leading to the coasts on its southern and eastern sides. As its name suggests (ammos means sand), the island is full of golden sandy beaches, which together with the turquoise waters of the sea, the low vegetation, and the impressive rocks and the small rocky islets, make up an explosive scenery. 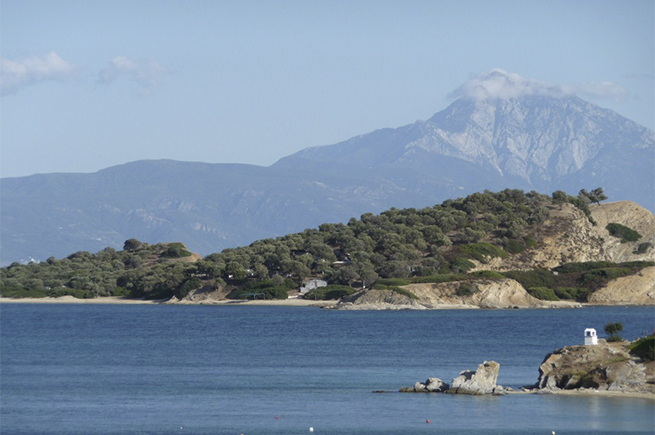 Taking the decision to start from the most accessible places, we drove at the only asphalt road to the most popular beach, Alykes. In just 1,5 km from the settlement, a pond appeared in front of us, which is separated by a narrow strip of land from the sea. In the old days, the sea water came into this pond and after evaporating, it secured the salt supplies to the inhabitants. Alykes coast reminds of a tropical landscape with umbrellas made from canes, crystal clear waters and endless sandy beaches. In addition to the bar which is built on a mound, you will find two or three taverns next to the waves, overlooking Mount Itamos on the peninsula of Sithonia. 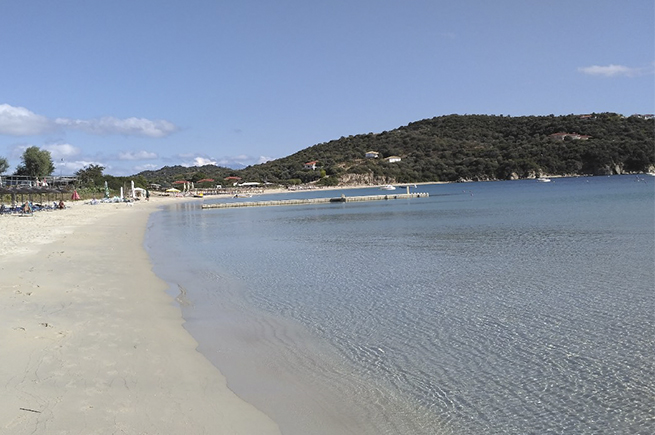 After a delightful swim, we followed the path to the east. From high up we see small idyllic bays with blue waters. We cross Glastri Cove and take a stop at Ai-Giorgis with the sandy beach, protected by the rocks which rise from the rugged surface of the sea. Our gaze extends to the opposite shores, where the imposing Tower of Prosforiou in Ouranoupoli, the popular gateway to Mount Athos, stands out. 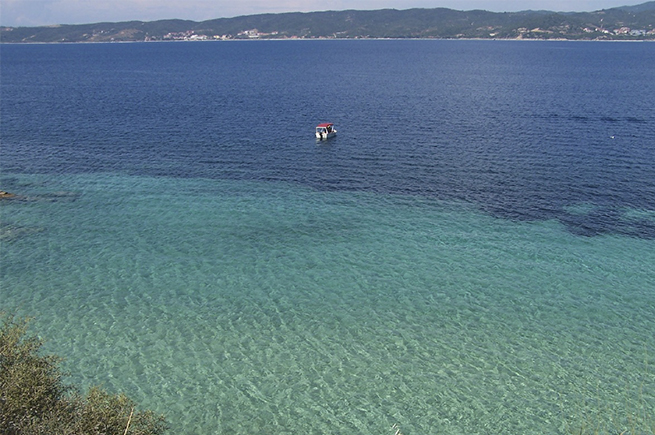 We continue our journey to reach the eastern end of the island, the wonderful beach of Megali Ammos (just 4 km from Ammouliani). The coast is a point of reference for those who are looking for holidays in a caravan (which offers some home comforts), combined with endless moments of meditation and tranquility alongside nature. The campsite is well-kept and so are the café-bar and the tavern which enjoy an advantageous location with unobstructed panoramic view. We climb the rocky hill at the eastern edge of the coast and sit on the rocks to admire the seductive landscape. Drenia, the small deserted islets of Ammouliani, next to each other, emerge from the sea, while behind them rises - like a protective embrace - the glorious peak of Mount Athos. 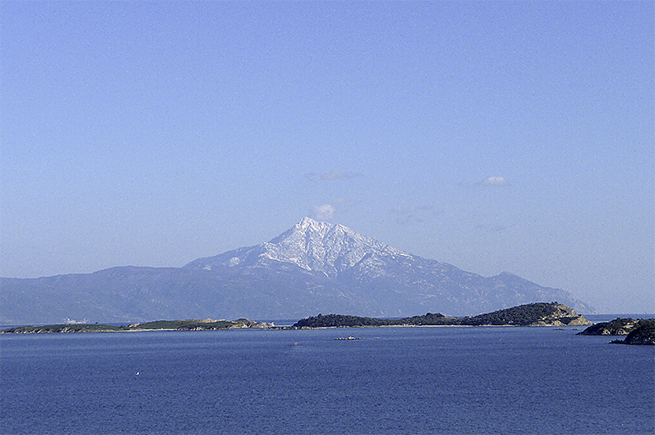 Seeking for exotic and dreamy places

The next day, we were determined to live more fierce situations, exploring the western and even more inaccessible side of the island. The truth is that we did not know exactly what we would meet and where we could get. All we knew was that we would cross dirt roads. The fact that we were moving with a conventional car was not a hindrance to change our minds and stop the whole thing. So, we found ourselves driving at the dirt road which was leading to the inaccessible corners of the island, the beaches of Nisakia and Karagatsia. 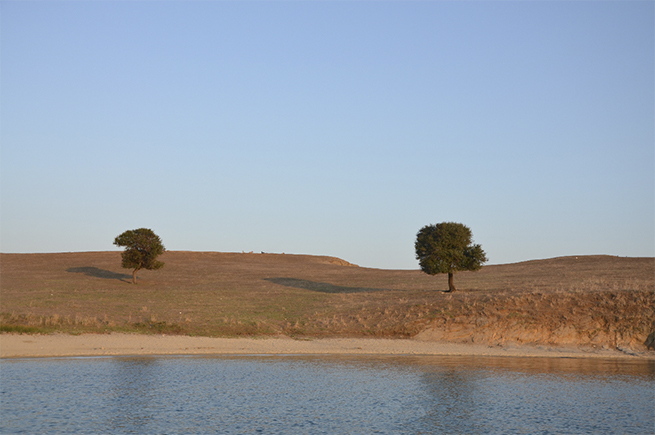 From the beginning of our journey, the stones and the potholes we encountered did not allow us to be optimistic about what was to come. So we decided to move slowly and carefully, also wondering whether we had taken the right road (although there was no other). All we could see was the vast land of olive trees, while the coveted blue of the sea was absent from our visual horizon. Besides, we had traveled more than 1 km without meeting a sign. At 2 km from the settlement, we encountered a junction where, fortunately, there was a sign. To the right to Nisakia-Faka, to the left to Karagatsia. We turned on the downhill gravel road to the right and after a while, the image of the two green islands in the middle of the sea, has reassured us that we went in the right direction. 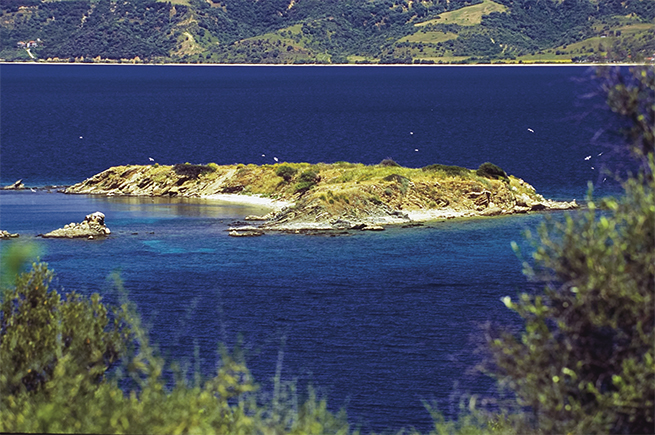 Xeropotamina islands, on the west side, guarantee moments of relaxation and carelessness.

The area of ​​Fakas with the Xeropotamina islands, is one of the most remote ones of Ammouliani and if you have a boat, exploration is a real challenge. If you have a 4x4 wheel drive, you are equally privileged, because you can easily reach the corners of the island that attract the fewest tourists. If you are looking for the most deserted and most exotic beach of the island, continue to Karagatsia. We approached it with a lot of effort, pouring sweat under the hot afternoon sunshine. The dirt road became more and more narrow and as our car crossed the dense vegetation, it was bumping up and down on the potholes. But the idyllic image of a bay, surrounded by green rocks, with golden sand and waters, without exaggeration, transparently, satisfied our most crazy expectations. Diving into the crystal clear waters, with the unique sound of the splashes of the waves and the squawks of the dozens of seagulls, is enough to travel you far away. 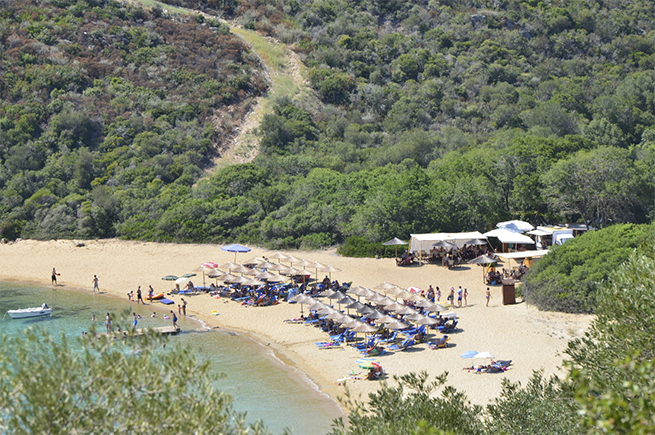 Ammouliani is located in the bay of Siggitikos or Mount Athos (Agion Oros), which is formed between the Sithonia peninsula (west) and the Mount Athos peninsula (east). It has an area of ​​4.5 square kilometers. Its history is very old, as traces of structures on the island date back to the classical era. In the area of ​​the harbor there are ancient remains of buildings and architectural stone sections. From the time of Byzantium to the Asia Minor Catastrophe, Ammouliani belonged to the parish of the Monastery of Vatopedi of Agion Oros. The fortune of the island was changed in 1924, when the refugees of Asia Minor started to settle. The property of the monasteries was taken by the government, in order to house the refugees. The first five hundred inhabitants settled in the monastic buildings, in the church and in the stables. After, they started slowly built one-storey and two-storey houses with courtyards, creating a beautiful settlement. They have of course brought with them their culture, ethics and customs. Thus, with their experience and knowledge of the sea, they were devoted mainly to fisheries and managed to develop it and become distinguished seafarers and fishermen in a short time. They also occupied with agriculture, farming vineyards, wheat, maize and livestock farming. Today, Ammouliani belongs to Municipality of Stagira and has about six hundred permanent residents. 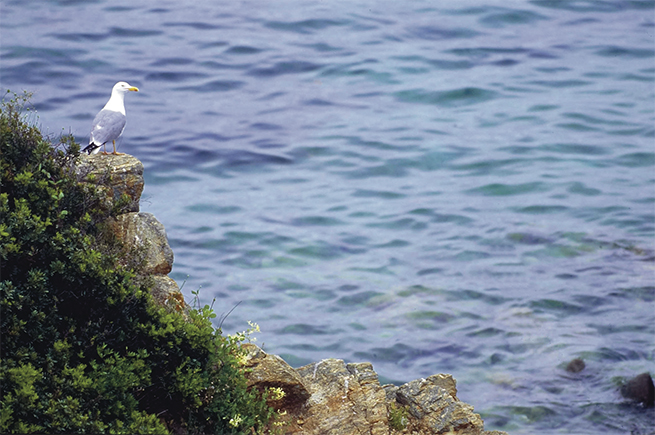