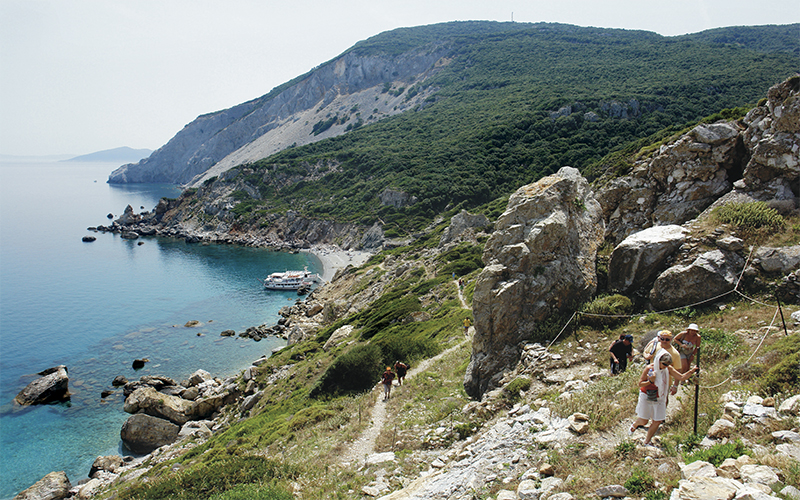 Full of forests touching the waves and the golden beaches with crystal clear waters, Skiathos is a "paradise"!

Surrounded by pine trees and olive trees, Skiathos, the island of Alexandros Papadiamantis, the famous novelist and of Alexandros Moraitidis, the writer, has to offer many to the most demanding traveler. The scenic Chora with the whitewashed houses, the flowery neighborhoods, the Castle which stands proudly on the high rock towards north, the medieval town, this island seems to have all the credits! 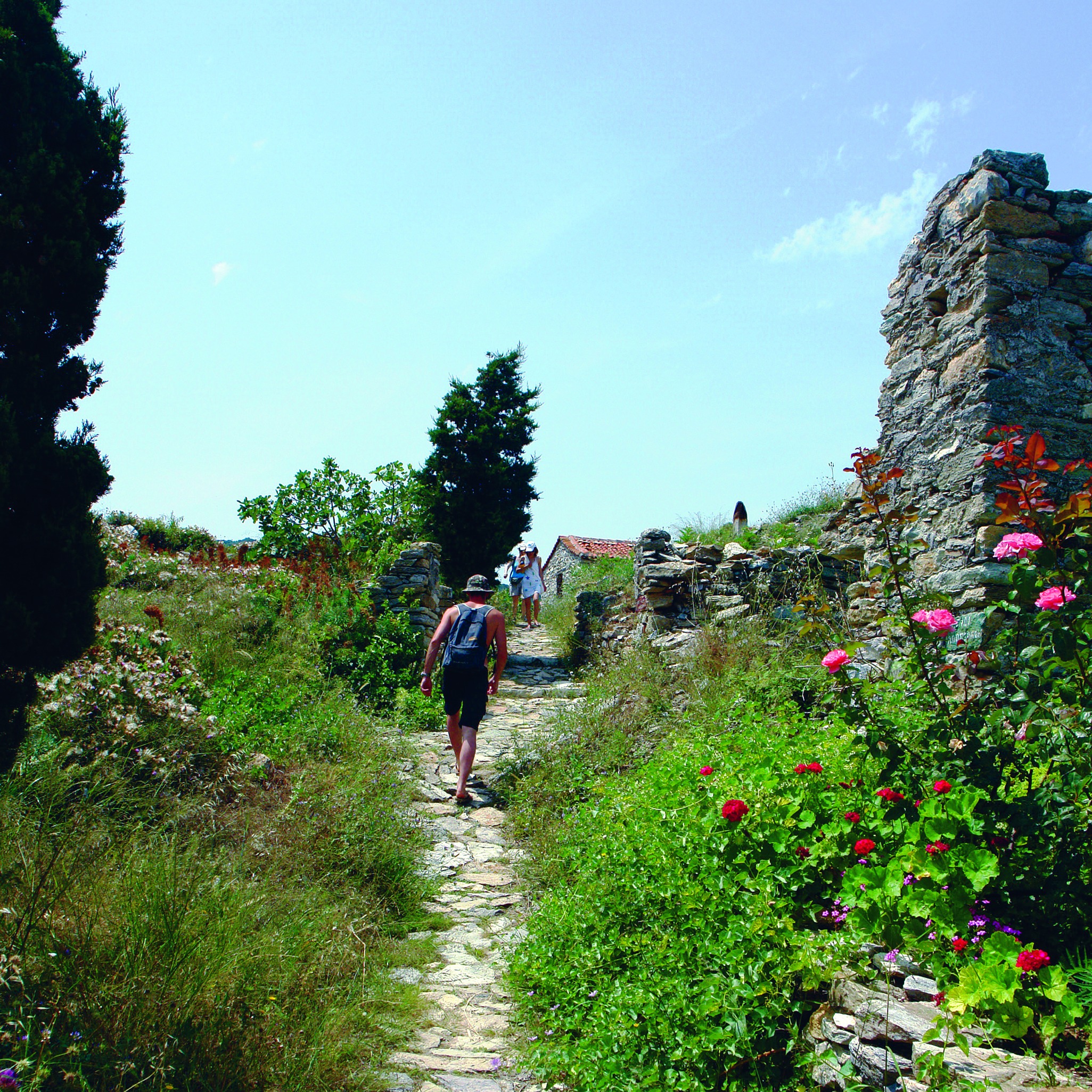 I decided to discover the green island of the Northern Sporades, walking on one of its many (at least 25) traditional trails. With me is Nikos Machairas, a graphic designer and cartographer.

In Panagitsa at Pyrgi

We start around five o`clock in the afternoon with our four wheel drive car heading to Castro. On the way, we take some panoramic photos of Skiathos. When we reach the starting point of the trail, we leave the car and continue on foot along the footpath. Entering the trail full of wild berries and pine trees, we can see the signs and markings on trees and rocks. The peace and the tranquility of the forest "caresses" our soul. We stop to cool down in a spring with crystal waters and then we continue to the church of Panagia Kardasi ("Panagitsa", as mentioned by Papadiamantis, who has dedicated his poem "In Panagitsa to Pyrgi" to her). According to tradition, the inhabitants of Skiathos`s Castle, during the Ottoman domination, in order to avoid the raids of the pirates, had built a small settlement in Pyrgi district, where the church is located. However, it was destroyed by a fire (end of the 19th century) and later it was rebuilt at the same place. Our attention caught its blue bell tower that looks like a ship's mast. 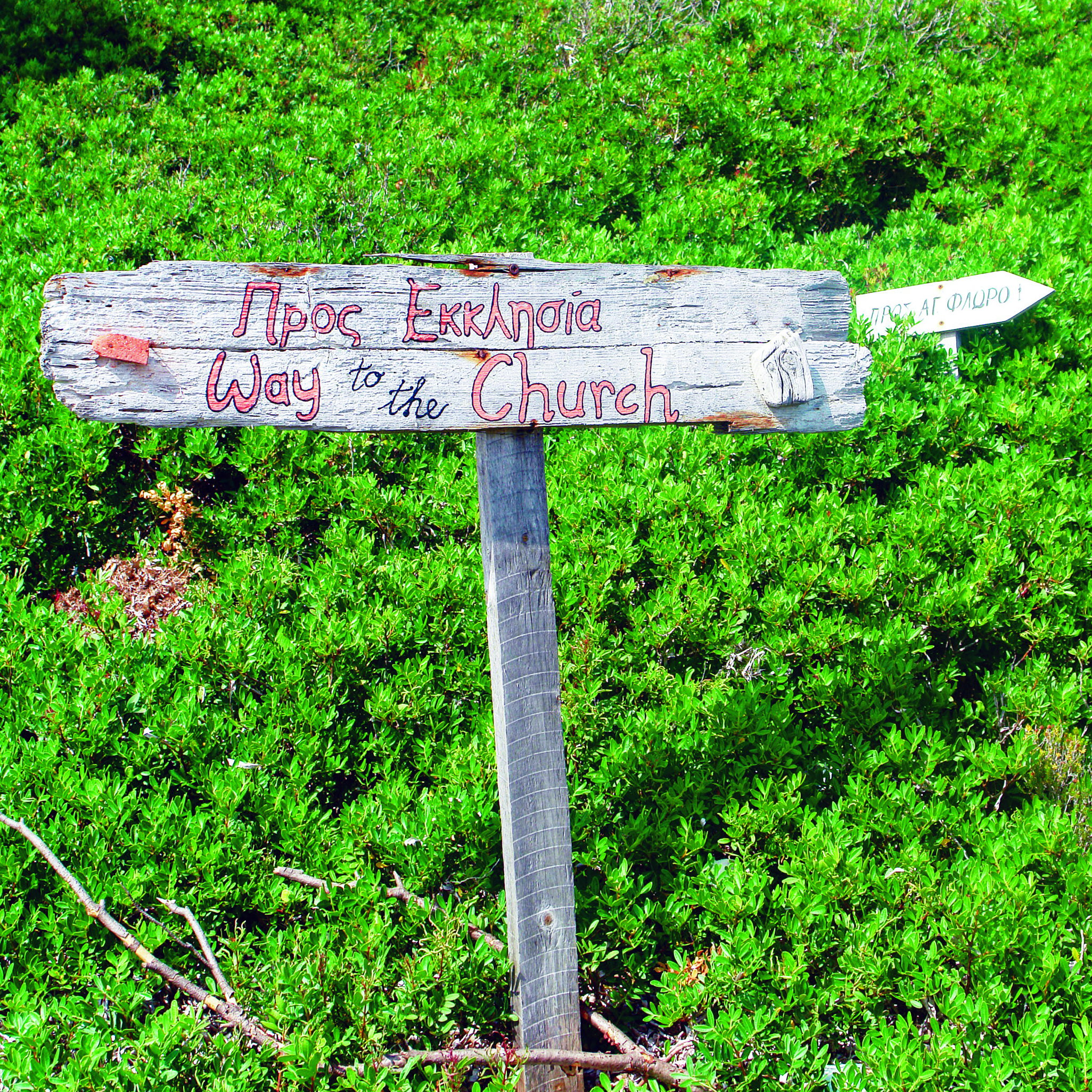 Along the way, from some clearings we have a view of the sea and the rocks of the Castle. A little lower from the source of the creek Doman, in dense vegetation, is the chapel of Panagia Doman. A few steps below, there is the Doman Fountain, with cool drinking water. The verdant path we follow leads us to the well-built stone alley that leads to the Castle. From here we have fantastic views to Pelion. The sun shines on the sea and a sailboat with open sails rips the waters. At the end of the stone road we continue walking to the Castle. Passing through the Castle gate, we head to the top with the old cannon and the Greek flag is waving, gazing at the Aegean Sea... At the beach that is formed under the Castle is the spring of the birds and the ruins of the church of Panagia Kastriotissa. There is a café – tavern for relaxation and enjoyment. 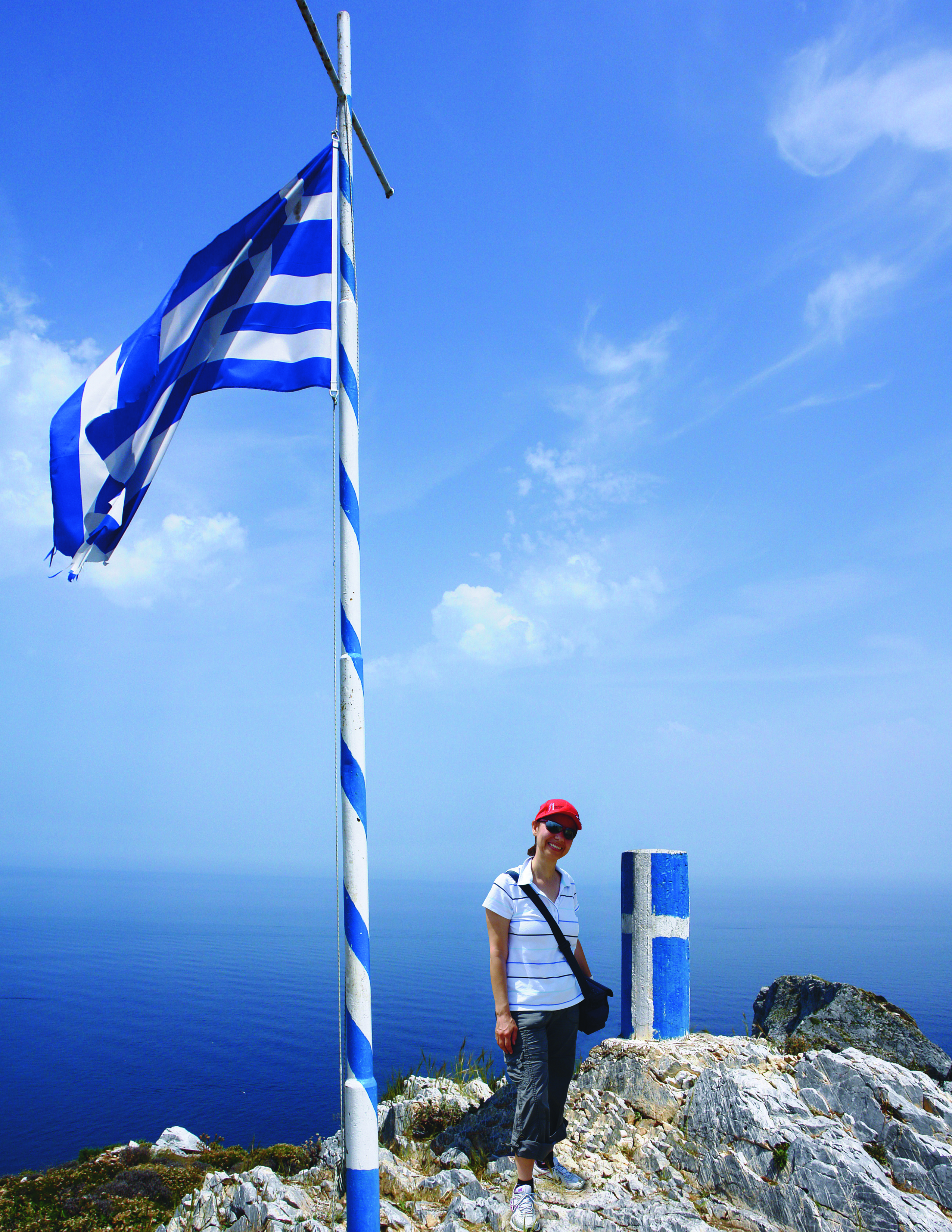 At the edge of the Castle of the medieval town of Skiathos.

For hiking, avoid the mid day hours, because the sun is not joking. Do not forget to wear proper shoes, long pants, hat and glasses. A bottle of cold water is definitely needed!

The Castle has its own story

I had read a lot about the history of the Castle and I learned much more during the tour. The Castle is the medieval town of Skiathos. Its inhabitants built it on this tall rock (in the 14th century), above the sea, to be protected from the pirates and lived here until 1829. It was reinforced by strong walls and cannons. The Castle was connected with the inland by a wooden mobile bridge that rose in case of a hostile invasion. Above the gate there was an oil or water container that was thrown to the enemy in case he approached dangerously. The castle was run by the Byzantines until 1453. After, the Ottomans followed until 1538 and finally the Ottoman Turks until the revolution of 1821. Today only four churches are saved out of the total twenty churches which were initially built of the Castle. Saint Nikolaos, Saint Marina, Saint Vasilios and the metropolitan temple of the Birth of Christ. There are still remnants of a mosque from the Turkish Administration and an old cannon. 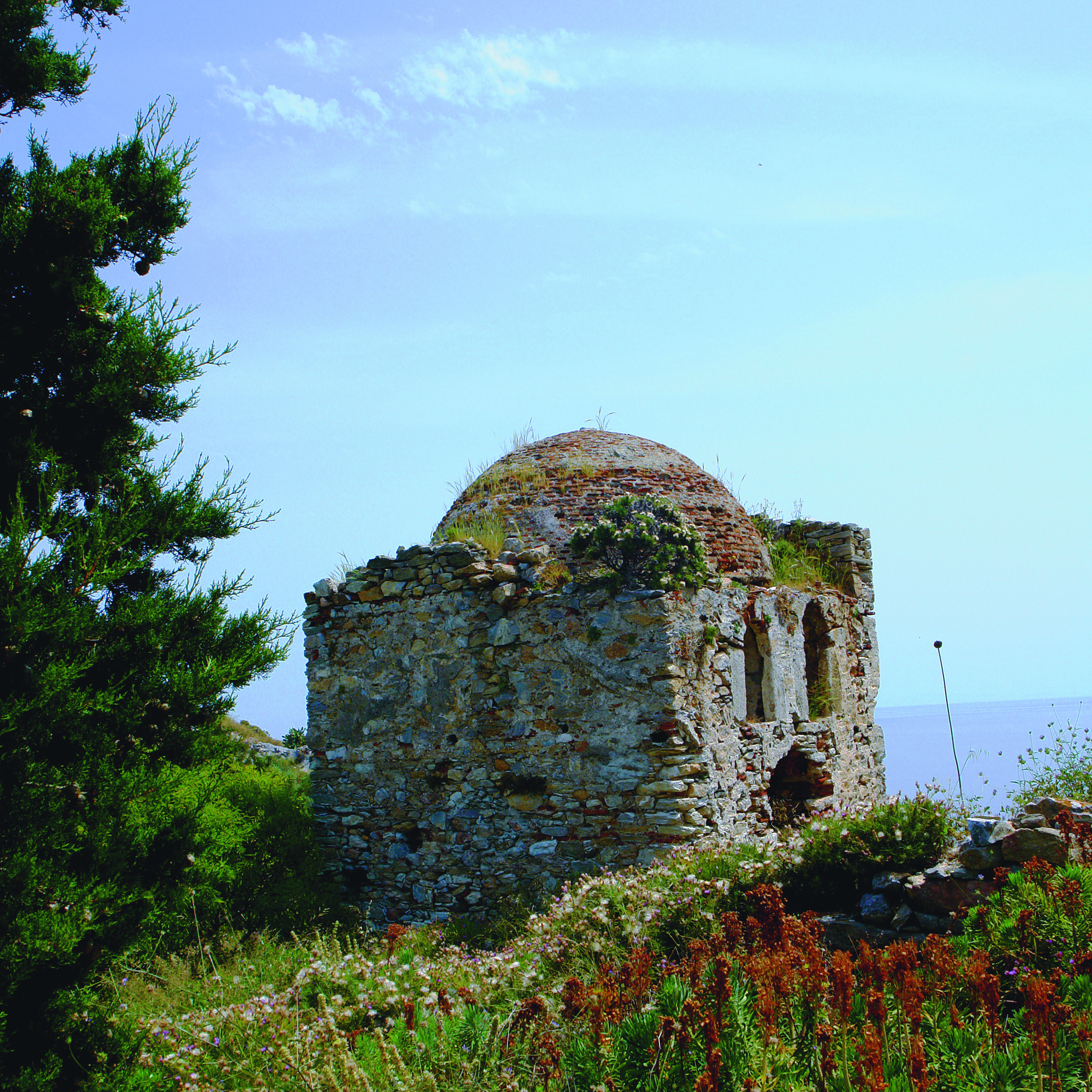 The old mosque at the Castle "gazes" the sea from above...

Sailing around the island

At 9.45 in the morning, Captain Lambros is waiting for me at the port with his ship, to take me to the tour a round the island. The weather is beautiful. The boat is sailing around the green Bourtzi (building of the Venetian domination in 1207) and immediately afterwards we see the picturesque old town of Skiathos, mirroring in the waters of the harbor ... We head to the north! In a short while we reach the enchanting beach of the island (one of the most beautiful in Greece), Lalaria, with the white pebbles and the transparent, turquoise waters ... Time of stay: one hour. In the background, the characteristic rock with the arch marks the landscape holding away the sun with its shadow. We are heading towards the rock, and as we approach, the color of the waters become more emerald. Swimming in these crystal clear waters is an experience one will not easily forget. 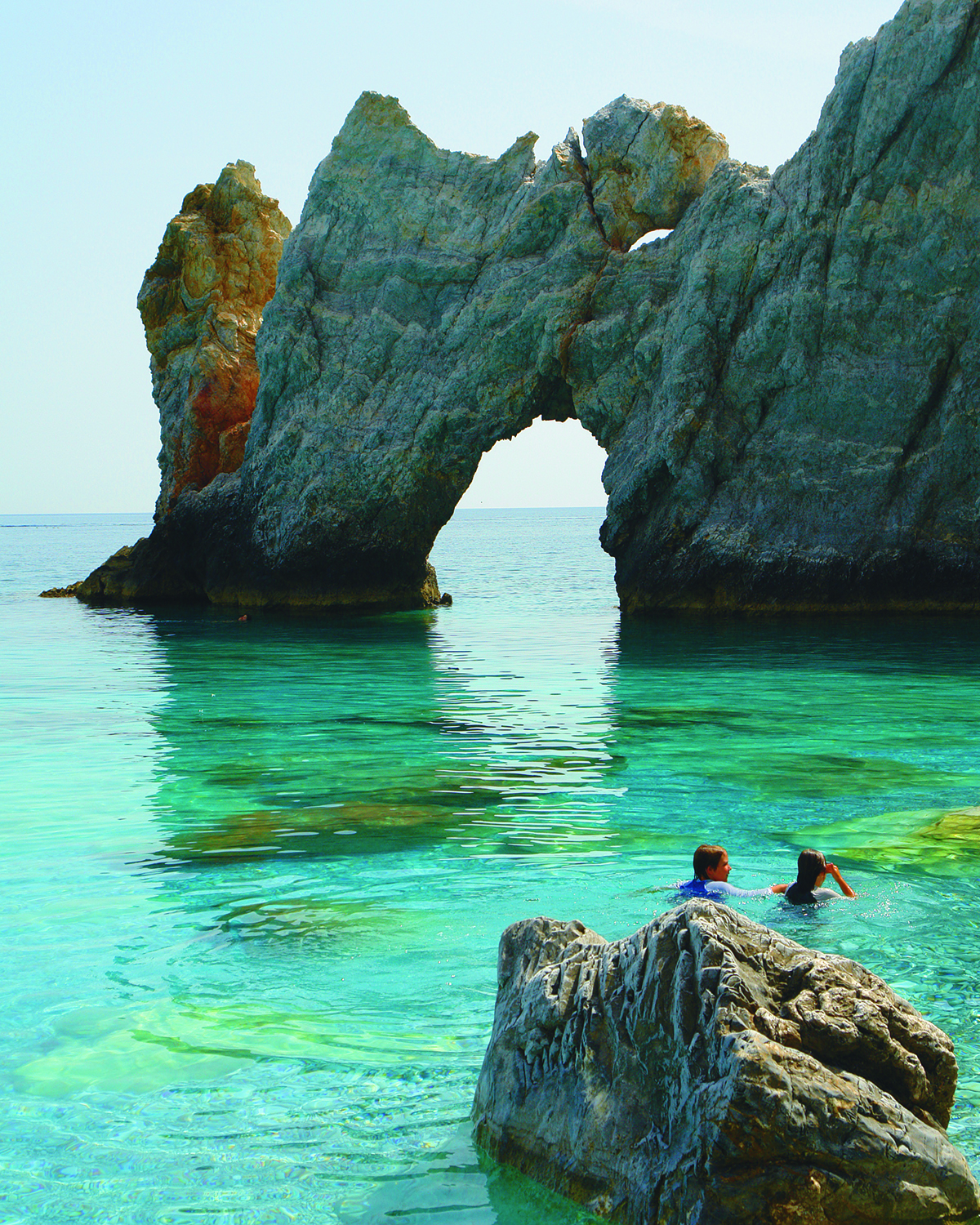 We return to the base of the Castle and we stay here for an hour. Now we have two choices: the first one is to climb to the Castle from the old hiking trail and make a quick guided tour and the second one, to go down to the beach for a swim or coffee. We chose the first one and ascend to the highest point of the rock where we sit and admire the big blue of the Aegean Sea tasting the salty air. 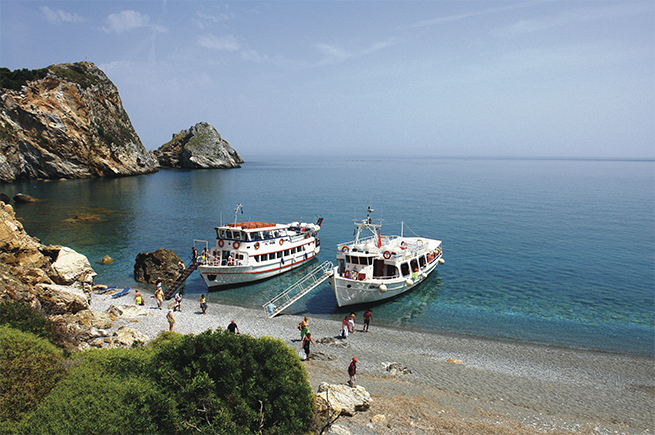 The boat "Calypso" patiently waits for our return in Castle`s port.

After the tiring uphill road and the heat at its peak, (the hat and the right athletics shoes, made our ride more secure and safe) we return to the ship and sail to the west coast, passing along the rocks that formed the base of the Castle and gazing at the sea caves. On our way we see the cave "Fonissa". Our boat sails for the coasts of Pelion, to eat fresh fish and seafood in one of the taverns in the picturesque harbor of Katigiorgis. In the afternoon we go for a coffee to the beach of Tsougria, the green islet near the port of Skiathos. From the beach, we follow the short, lush path that leads us to the chapel of Saint Floros and Saint Lavros. It is built on a large rock that separates the two largest beaches of the verdant island. 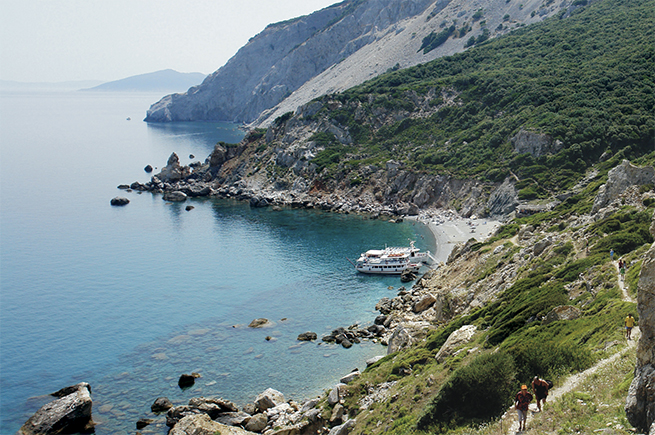 Climbing up to the Castle from the port which is “at our feet.

We return to the port of Skiathos in the afternoon, with a sweet fatigue, but with many images in mind and unprecedented experiences. "Goodbye, Captain Lambros and I thank you for this fascinating trip that we lived today." The amazing days we spent at this beautiful island of Skiathos will remain forever in our thoughts and hearts.

The best beaches of Skiathos: