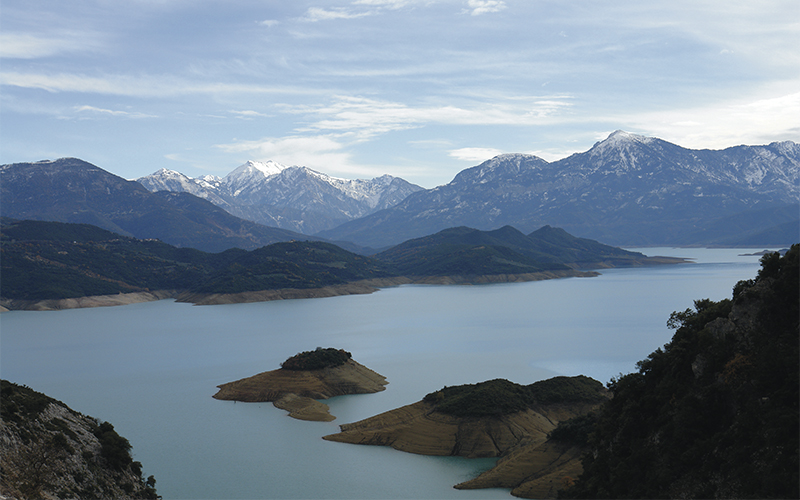 Nestled in the lap of the Agrafa mountain range, this lake is formed by four rivers and is easily accessible from both Karpenisi and Agrinio. We preferred the second option to discover other unknown beauties on our route...

It is the largest artificial lake in Greece and was created by the concentration of the waters of the rivers of Agrafiotis, Acheloos, Tavropos and Trikeriotis, after the construction of the Kremaston dam in 1965. This water hug stretches over two prefectures: Evritania and Aitoloakarnania.

They are joined by the impressive bridge of Episkopi. At another point we will meet Tatarna Bridge, near which is the famous Tatarna Monastery, which is definitely worth a visit. 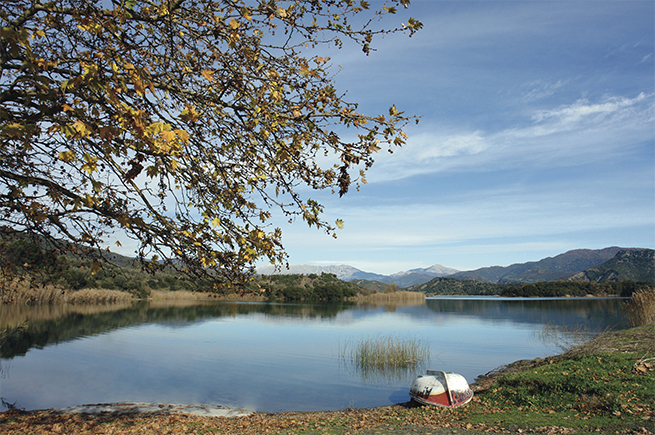 Starting from the side of Aitoloakarnania and more specifically from Kastraki (after Agrinio), we started to climb up to reach our destination. The day is sunny and the surprises doesn’t take long to make their appearance.

A beautiful, green lake with tranquil waters and lush banks are stretched out in front of us. It is Lake Kastraki, another artificial lake near the villages of Kastraki and Babalio of Aitoloakarnania, which is formed on the river bed of Acheloos.

The dam of the lake is 95 meters high and there is a hydroelectric power plant, operated by the Greek Public Power Corporation (PPC). This lake was formed after the construction of a second dam on Acheloos River and covers an area of ​​28,000 acres, retaining a significant volume of water. 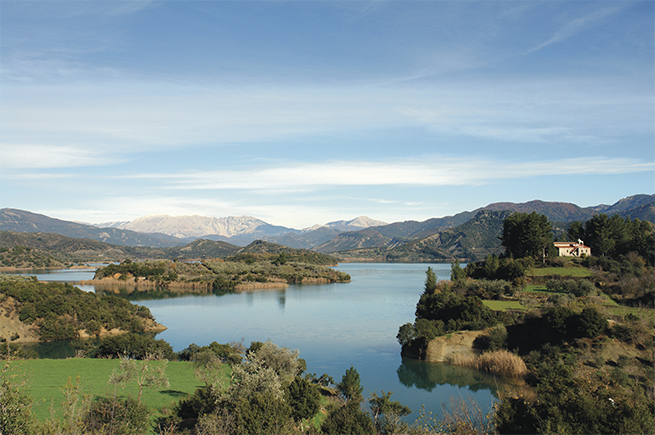 Our gaze stops at a beautiful chapel that crowns the top of a green hill and has the privilege of a generous view over the lake and the opposite village that is reflected in its waters.

Continuing to reach the bridge of Episkopi, to the right of the road we will see a well-built stone bridge that crowns the banks of a river. The landscape continues more rough as we leave the mainland and enter in the mountain range of Agrafa. 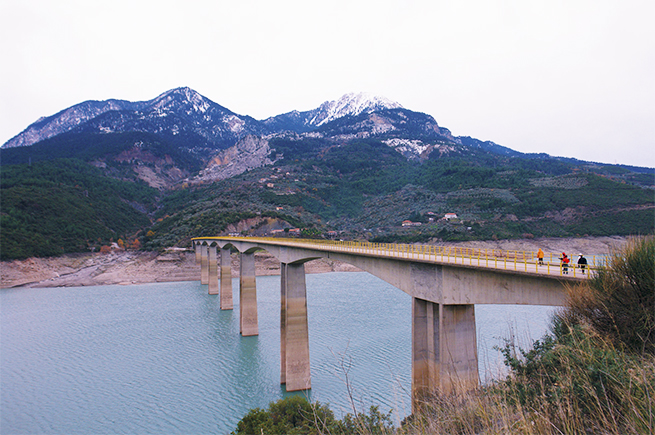 A lake which lavishly donates its beauty...

The view of Lake Kremaston or "Pavlos Bakoyiannis" lake comes unexpectedly and impresses us with its vastness and sometimes with its long shape and the characteristic small islands that emerge out of its waters... 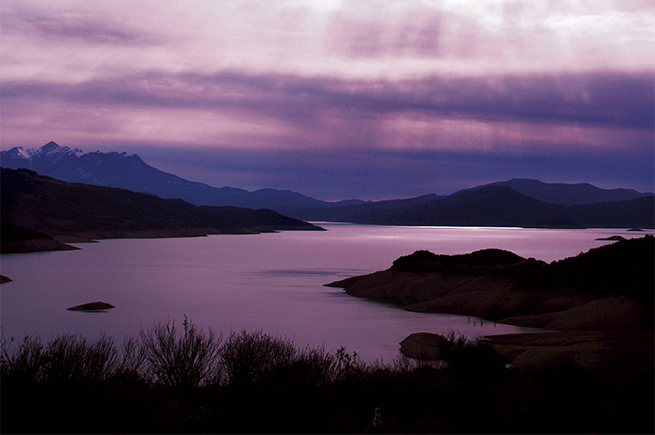 It unites the prefectures of Evritania and Aitoloakarnania, as we have said, but also the municipalities of Karpenisi, Fragistas, Aperadion and Aspropotamos. This lake was created after the construction of the Kremaston hydroelectric dam, which was built by PPC for the generation of electricity.

It is important to say that Kremaston Dam is considered to be the largest barrage in Europe, with a volume of 7,800,000 cubic meters and 155m. high ( 11 times larger than Lake Marathon).

However, with the elevation of the dam, several villages, bridges and churches were lost in the waters, changing the landscape and the climate of the area. Among them is the Byzantine church of Episkopi (8th century), dedicated to Virgin Mary. Some important icons and hagiographies that were saved, are kept in the National Museum of Athens.

In West Fragista there is an exhibition space-a virtual representation center of the historical monuments (such as the stone bridges that sank into the lake).

The Bridge of Manolis

Another beautiful stone bridge, which was uniting, for many years the shores of Agrafiotis, was lost in its deep blue waters. It is Manolis`s Bridge which, when the water level is low, makes its appearance and is exposed in the lively sunlight... 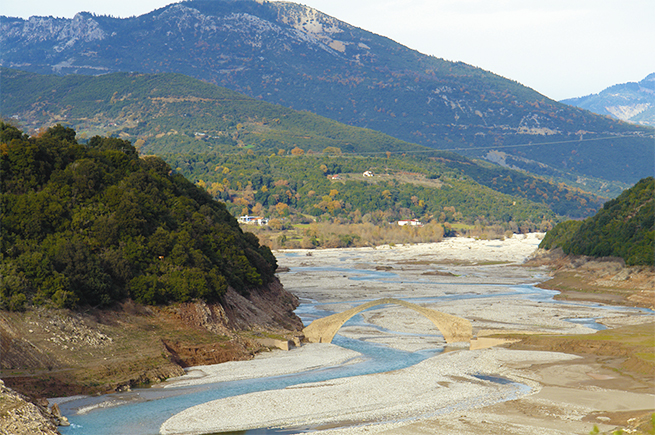 The locals told us a story about its construction...

They say, that a man who had an inn in the area, saw in his dream that he had to join three siblings. So he translated it that he had to unite the three rivers of the region: Acheloos, Tavropos and Agrafiotis. But how would he do it? What's simpler than a bridge that will pass over Agrafioti and will unite the East with Western Evritania.

Thus, the bridge was built (in 1659), which took the name of the innkeeper and withstands until today. We will find it if we turn left from Krioneri bridge (under Krentis) towards Fterolakka. At the historic

Built at an altitude of 100 meters above sea level, the Tatarna Monastery is one of the most important monasteries in Evritania. Its creation dates back to the 12th century, but back then, it was located, near the mountainside. It was destroyed during the Ottoman domination, but was rebuilt in the mid-16th century by the monks Methodios and David.

It was the base of the struggle against the Turks, and in 1823 it was completely destroyed. It was rebuilt and destroyed several times. Fi,nally it was reborn from its ashes for the fourth time. In the monastery, you will find the miraculous icon of the Virgin Mary of Tatarniotissa, covered in enamel. 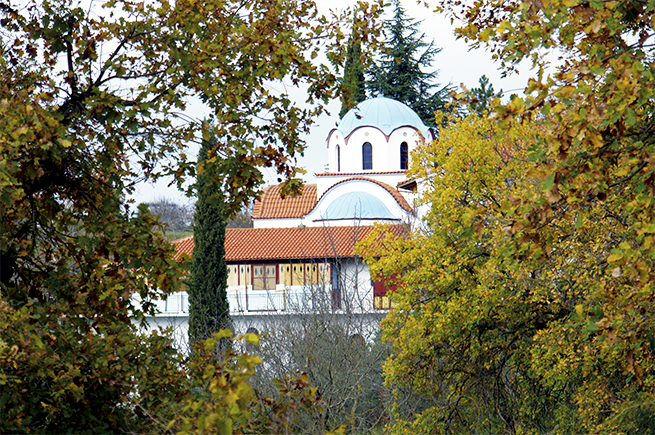 atarna Monastery has one of the most important museums of heirlooms (most importantly, the picture of "Humiliation Extremes" of 12th-13th centuries). The bridge of Tatarna has been awarded in international competitions for its structural design.

It is the work of the professor Aristarchos Economou of the University of Patras (Department of Civil Engineering) and has been constructed with an innovative technique, for its time, as it is formed by independent "T" sections, which ensure the seismic protection of the bridge.

With kayak canoeing on the lake...

Kremaston Lake is part of the Natura 2000 Program. In its waters, we can enjoy doing kayaking and canoeing, by contacting the responsible alternative tourism companies which operate in the area. 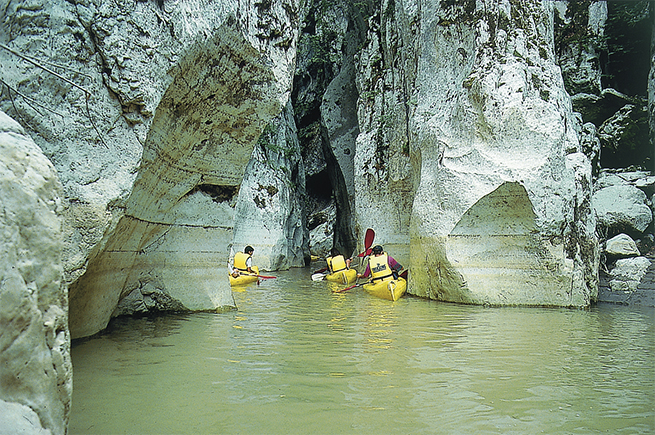 Its tranquil waters will calm our mind, while rowing will train our body. The duration of this activity is usually two hours. The necessary equipment will be given to us from the organizing company and of course an experienced guide will show us what we need to know to enjoy it safely. 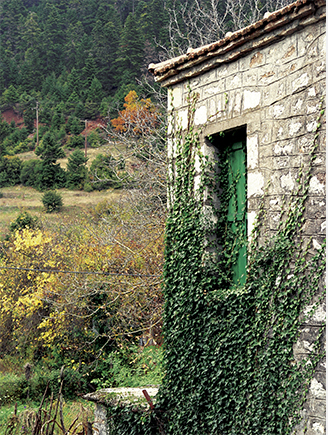 A good choice for a stay is the scenic village of Fidakia, Evritania, drowned in the fir trees and having its gaze upon Lake Kremaston. In order to enjoy the panoramic view of the lake, but also to work out in the best possible way, we walk from Fidakia to Tsagaralona, on a nice dirt road.

What we will see, will completely compensate us, as the view to the lake shocks! 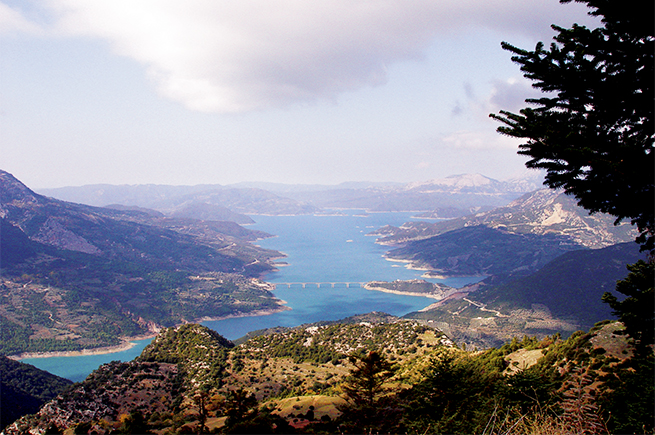 Many forest paths are also offered for hikes in this area, as long as we have always experienced people who know the region and its paths well.

We can take another hiking trail, which is easy and starts from the village Krentis, following a path with a fantastic view of Lake Kremaston, as well as the forested mountain peaks of Agrafa. Depending on our experience and our fit condition, it lasts about 3 hours and needs a professional escort, as required on such routes. 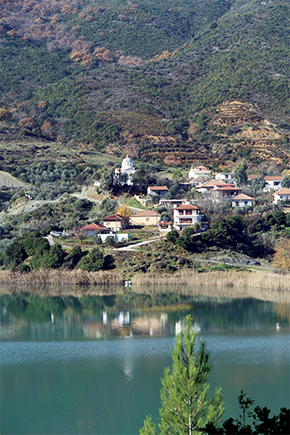 For organized activities in nature:

If you like sports in nature, on this trip you will find the ... paradise!
Trekking Hellas Evritania

What is worth buying: 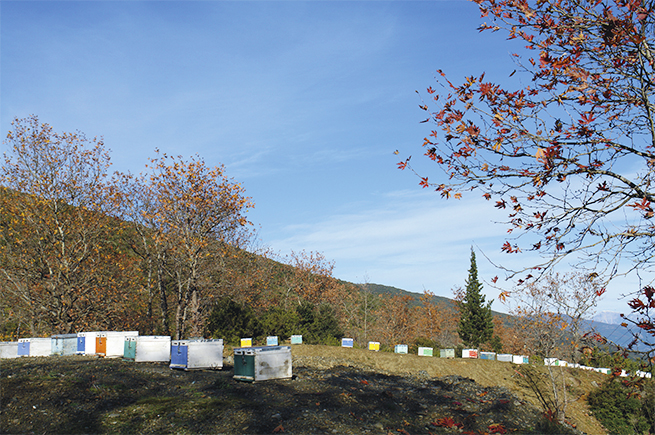