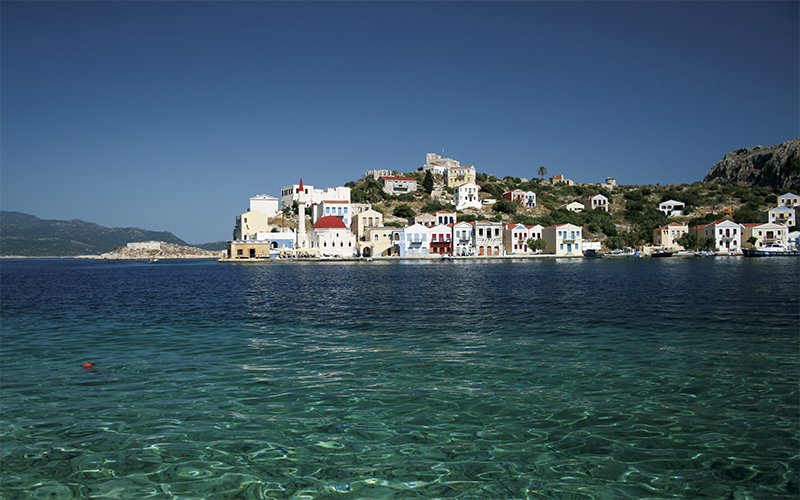 A few miles away from Turkey and close to Rhodes is Kastelorizo, waiting for you to be lost in its colourful alleys and to discover its history, its passions and its inhabitants.

Summer monopolizes everyone’s' thoughts. Among friends, the discussions about the summer holidays come and go, while at work the sighs and the desire for the time of escape become all more intense as August approaches. The popular Greek islands will be flooded this year by tourists - Greeks and foreigners. My own ship, however, sails to another destination this time, different, in a place with strong elements of hospitality and majesty, which for years now make it unique. A few miles away from Turkey and close to Rhodes is Kastelorizo, waiting for you to be lost in its colorful alleys and to learn about its history, its passions and its inhabitants. 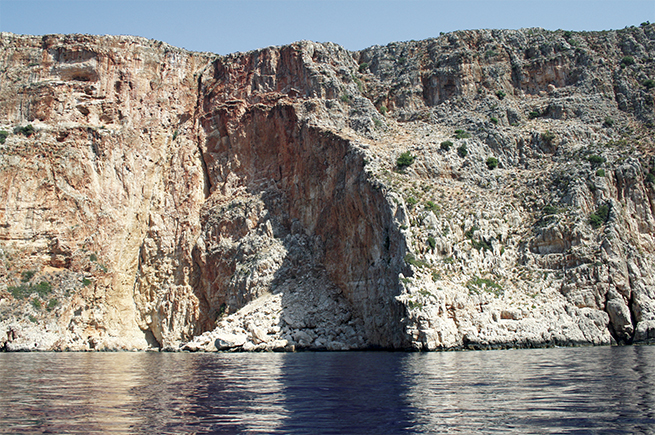 According to the inhabitants`s saying, from this cliff fell the young girls who did not want to consent to the matchmaking of their parents.

The amphitheatrical structure of the village that surrounds the harbor is like a painting that wants to enclose the witnesses of the passed by ages, but also magically isolates it in its own microcosm. Here the problems and the routine have no place, as if the sea has swallowed all the negative feelings, so that you can follow the calm rhythms of the island. You wake up in the morning, you open the window and watch the colors created in the sea as the sun marks the beginning of the new day. Going down to the harbor to drink your coffee, you listen to the locals talking about the common but also discussing how to solve the difficulty that tourists face when they want to reach the island with the existing coastlines - something that has become a habit for them.
They are not worried though and they do not lose their spirit. Besides, when you cannot get somewhere easily, the desire becomes bigger. And the truth is that your persistence is rewarded as soon as you arrive in the small but beautiful Kastelorizo. 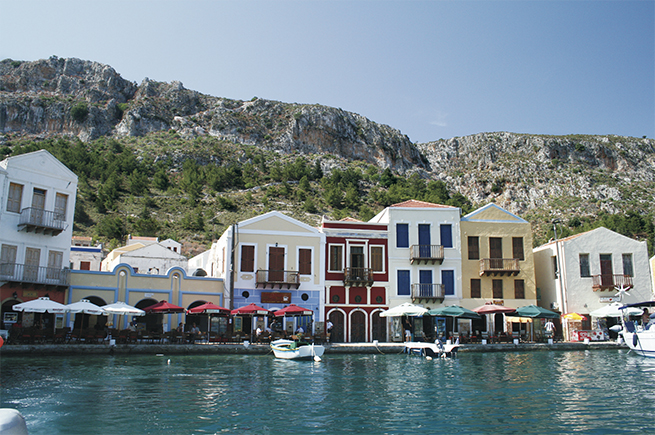 Its inhabitants are friendly and simple people, with courtesy and genuine smiles... this is Kastelorizo. It is difficult to try to describe it in simple words...
The colourful one and two storey houses with the Dodecanese triangular rooftops and the picturesque gulf with the fishing boats are just beautiful. The boat-taxi of Mr Antonis, is always there willing to guide you to the Blue Cave with the seals, to the island of the woman of Ro, who lived alone for many years and every morning raised the Greek flag and to Plakes, the beach with the white sand with the rocks around it. Even more difficult is to literally describe the crystal clear sea of ​​Kastelorizo, which even in the harbor reflect your image like a mirror. 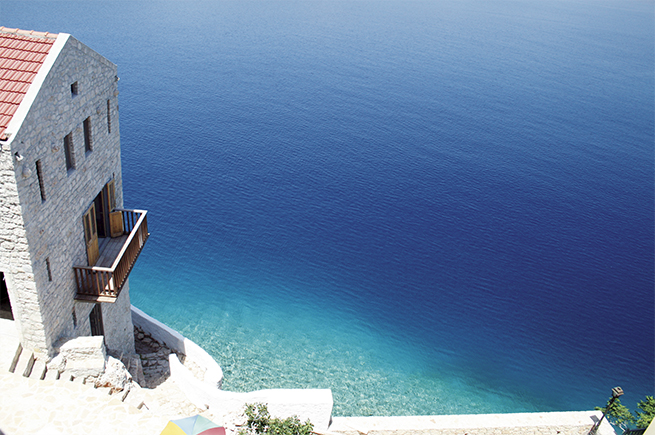 The crystal clear waters of Kastelorizo.

The two museums of the island hide all of its history. Through archaeological finds, maps and pictures they recount the wars and the enemies that have stepped onto its soil, as well as the vigor of the people who resisted with all their might. Walking along the seashore and after ascending the stairs which are directly adjacent to the mosque, you will see the Lycaean Tomb of the 4th century BC, located at the foot of the castle, Castello Rosso, after which the island was named. At this point of the earth, at night, if you stretch your hands, you have the impression that you embrace the stars. 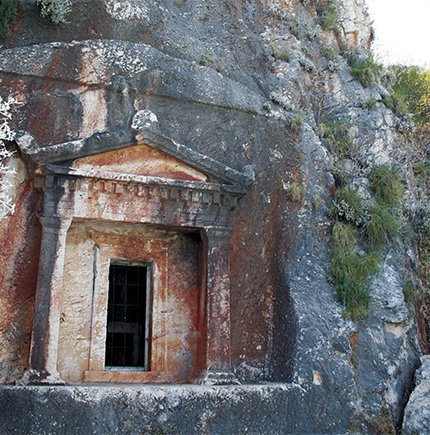 The 4th century BC Lycaean Tomb

No island is made up only of its monuments and its particular natural features, but also by its people, by their relationships, by the passion of their moments, by the loud voices with their singing accent, as you hear in Kastelorizo, where they always emphasize the last syllable of each sentence...
Kastelorizo ​​is made by Stratos, who has his coffee house in the bay of the island, by Antonis, by Giorgos, who have their taverns in the harbor, willing to offer you their freshly prepared dishes with fresh fish, by Rosa, but also by Mr. Michael, whose purity makes him have the faith, though blind, that the client who goes to his grocery store to buy something, will have the honesty not to steal him. Kastellorizo ​​is made also by those who own the homonymous tavern, with the paintings of a mermaid saying "Is Kastelorizo ​​living? It lives and reigns". It is made by all those who will gladly tell you their stories as you will be drinking your ouzo. Kastelorizo ​​is all these people together who have a piece of land on this island and they want to make it home for others.
Homeland is not always the place you are born, but the one you want to go over and over again. 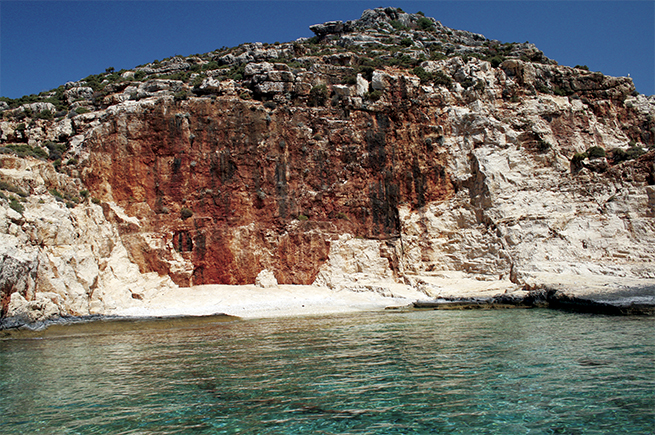 The beautiful beach of Plakes.

And life goes on eating fresh fish in the taverns, drinking retsina or coffee with the builders from Kalymnos, who have come to work on the island, without worries and anxiety. Every day, residents and visitors of the island can go to Kas, the Turkish city, just opposite Kastelorizo ​​- the distance is so small that you can easily see the houses on the opposite coast. Finally, you can enjoy the island at night accompanied by the moon and strolling in the small bars.

7 reasons to travel to Kastelorizo 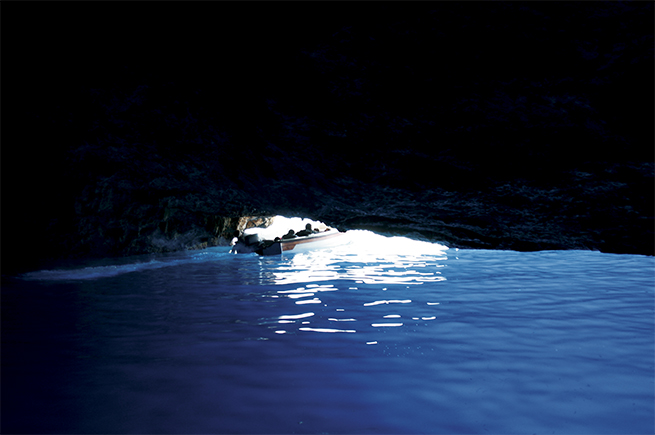 The entrance and exit of the cave is done with great care, as the opening is small.

All these have flooded my mind with images and feelings that I will never forget. I will definitely return, as Kastelorizo became my other little homeland of my heart... 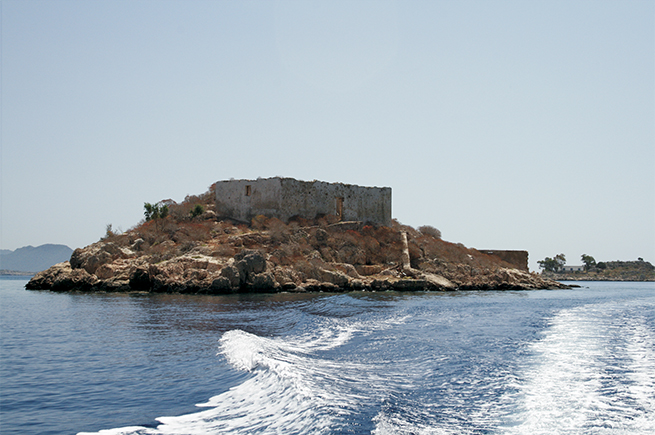