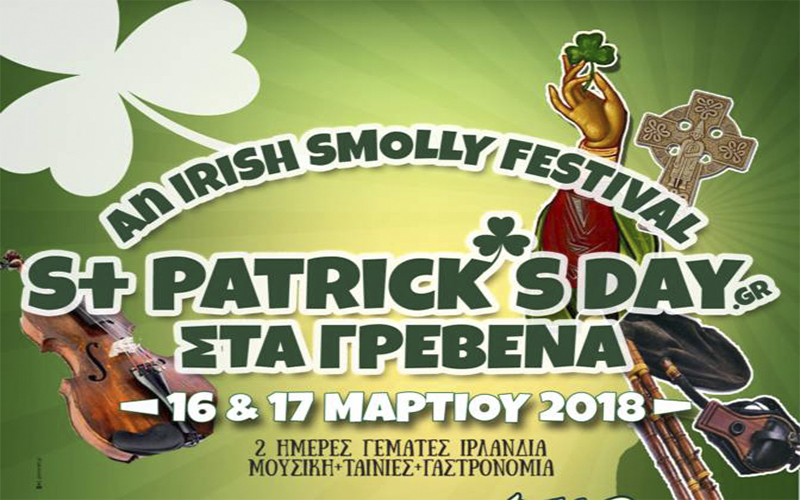 After three years of celebrating with musical evenings, this year St. Patrick’s Day will be framed with a small two-day long festival.The participants will be initiated into Ireland’s three cultural expressions. Traditional music, cinema and gastronomy. You can have a detailed view of the festival program, the idea and the vision of the event at the official website https://www.stpatricksday.gr

It is noteworthy that, it may be the first time in Greece, that a festive Divine Liturgy will be held in honor of St. Patrick in the Metropolitan Church of Evangelistria in Grevena. 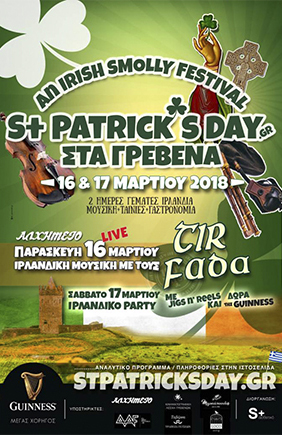 St. Patrick's Day , or the Feast of St. Patrick, is a cultural and religious holiday that takes place on March 17th, the anniversary of his death, according to tradition, St. Patrick (Saint Patrick) (approx. 385 to 461 AD), the most important protector of Ireland.
The St. Patrick's Day holiday was declared officially Christian in the early 17th century and is maintained by the Catholic Church, the Anglican Church (especially the Church of Ireland), the Eastern Orthodox Church, and the Lutheran Church. The daily cites St. Patrick and the arrival of Christianity in Ireland, and is an occasion for celebration of Irish culture and origin across the globe. The celebrations generally include parades and festivals, events called ceilithe, and the use of green or alfalfa (shamrocks) into garments and accessories. And the Christians attend religious functions in honor of the saint and the limitations of fasting of Lent on eating and drinking lifted for the day, which has favored the connection of tradition with increased alcohol consumption. (Information: Wikipedia)

20:00: View free film from the Film Club Grevena (in the Reading Room of the Library)
22.00: Concert of Irish music with the band of Tir Fada (in Alchimeio)
-The Tir Fada is a band based in Thessaloniki created Driven by his love for Celtic music tradition, taking into account, however, and the origins of its members.