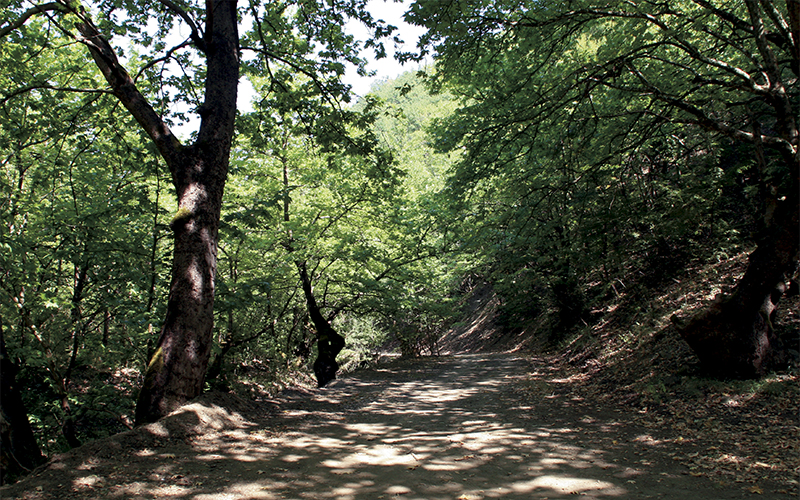 Greece is not just the islands! There is also the other Greece, the non-touristic side of it, such as Roumeli, Agrafa, Tzoumerka. Places, that do not stop surprising you and it`s up to you to discover them.

When I started on a Friday in September the road trip to the villages of Roumeli, I could not imagine what would follow. The temperature at the plain of Lamia was 38 degrees Celcius, although it was autumn. After taking the road Lamia, Lianokladi, Makrakomi, we made a quick stop to cool ourselves and then we continued towards Spercheiada.

While driving, I was trying to make the next day's program. In the fourth largest municipality of the country consisting of 23 villages (Gardiki, Kolokithia, Marmara, Kyriakohori, Nikolitsi, Pougakia and another 12 villages in a row), I had a bit of a problem organizing where to start and what to write. But when the people of the Municipality of Spercheiada welcomed me and started telling me where to go, the problem was quickly forgotten.

They wanted to show me everything. From the Lakes of Anatoli, to the forest of Oxia, at the border with the prefecture of Fokida. We scoured the mountains, making too many miles in a day! I was so happy and grateful, seeing their passion and the enthusiasm for showing me their region... 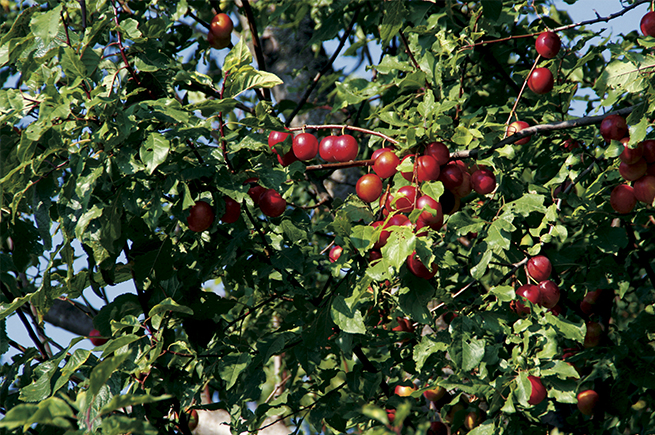 Our ramble begins on a Saturday morning from Spercheiada. With a cup of coffee in hand, we start for Marmara and Anatoli. As we go up hill, we observe the tremendous change of the landscape, with plane trees and fir trees. On a turn of the road, a beautiful eagle appears flying above our heads, giving us no time to photograph him. This picture predisposes us to what we will encounter further up, where human activity is less.

First station at Marmara, a beautiful and lively village, which is built amphitheatrically. It's 10 in the morning and the cafe is crowded with people who are welcoming us, enjoying tsipouro (a strong distilled spirit). Even it is the beginning of autumn, the village is still full of people. On the barbecue, a lamb wrapped in a baking sheet is roasting slowly and next to it is kokoretsi (dish consisting of lamb or goat intestines wrapped around seasoned offal, including sweetbreads, hearts, lungs, or kidneys, and typically grilled; a variant consists of chopped innards cooked on a griddle. The intestines of suckling lambs are preferred). As the Roumeliotes are very skillful in cooking this, they are also called "kokoretsades". 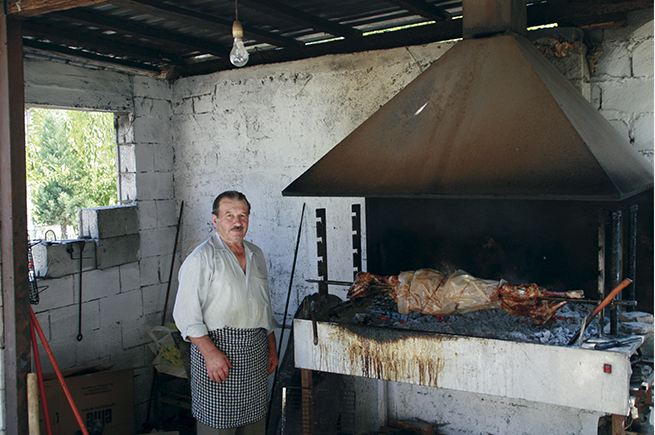 Roumeliotes are perfect cooks and they know it.

Before we get taken by the company and tsipouro, we enter the school where the folk museum of the village is housed. Inside a class room which once was full of life, is now the museum that contains everything. The sound of a gramophone take us back 50 years ago, when life was definitely more difficult, but less stressful and without tension. Axes, sickles, looms, an entire carpenter's shop with all its tools ready to work, and so many other things, make this little museum worth visiting. This is a worthwhile effort that deserves congratulations, as it takes us back in time, to the living conditions of the post-war Greece. 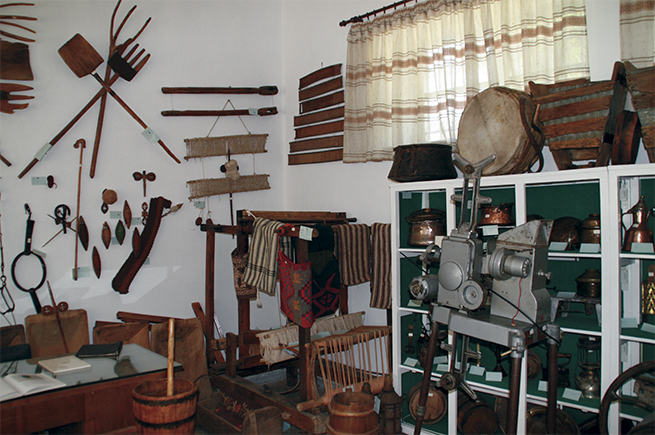 The Folk Museum in Marmara is worth visiting.

Time, however, is pushing us to speed up to see them all. So, we leave Marmara and continue to Anatoli, which looks like a real eagle nest, at an altitude 1,350 meters and the birthplace of mountaineer Kosta Tsiveleka, who has ascended to the highest peaks of the world. When you spend your childhood living in Anatoli and you overlook the mountains of Vardousia, the desire to conquer the highest peaks of the world, grows inside you. 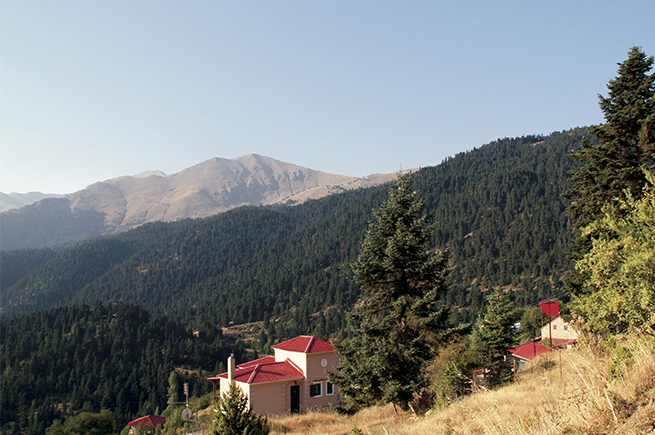 Overlooking at the Vardusia mountains from Anatoli.

And the adventure continues going to the lakes of Anatoli. The route is rutty and only for 4x4 vehicles. Even a shepherd is surprised seeing us and asks us: "Where are you going, are you mad?" The car jogs down the road until we reach our destination. Of course, there is no lake, because there was not much rain in order to fill the small cavities with water. The landscape, however, compensates us. The return is easier... 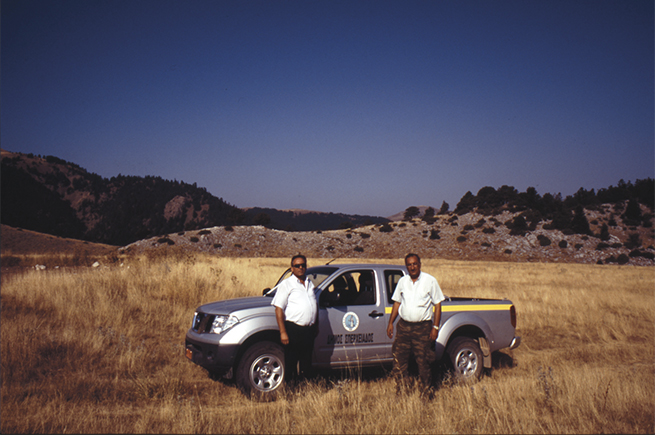 At the lakes of Anatoli with friends from the Municipality of Spercheiada.

Kolokithia is a beautiful village, built by Epirus craftsmen, with lots of vegetation and plenty of waters. At the square of the village we are waiting for the president of the Cultural Association Angeliki Karageorgou to give us a tour. One of the village's attractions is the church of the Assumption of the Virgin built in 1851. 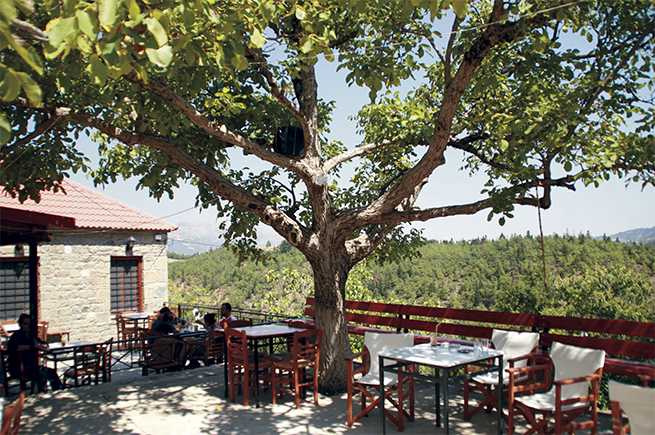 There is also the home of Aris Velouchiotis (a military leader of ELAS at the time of the Greek occupation from 1942 to 1945) who had converted it into headquarters. Panagiotis Haravgias, who has the tavern in the square, serves us tsipouro and we have a chat about the beauties of his village. Panagiotis is one of those who insist, despite all the harsh conditions, to keep the people in the village. The cafeteria and the tavern in the village, are the reference point for both locals and visitors.

Then, we leave for the beautiful village of Nikolitsi. Nikolitsi is known for the tsipouro feast every November. In the village square, the villagers place cauldrons full of this spicy drink and everyone can enjoy it directly from the big pot. 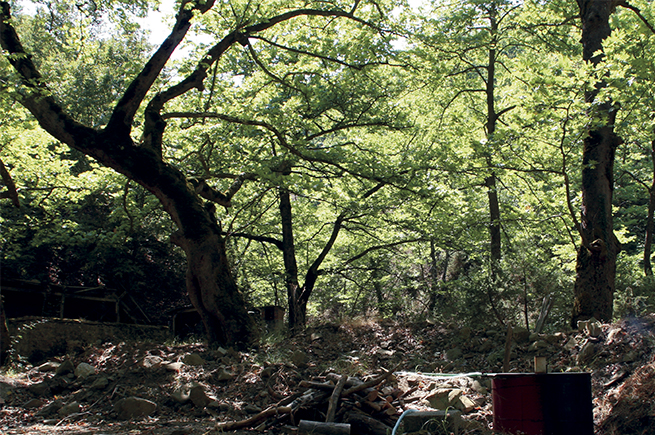 In Kyriakochori, the landscape with the plane trees compensates you.

After a quick break in Spercheiada for food and coffee, we start for the last route to Pougakia and the forest of Oxia. Pougakia village, is on the southwest side of the prefecture of Fthiotida, at an altitude of 950 meters. It is one of the villages that have life in winter, as it has about 100 permanent residents, most of them elderly people. 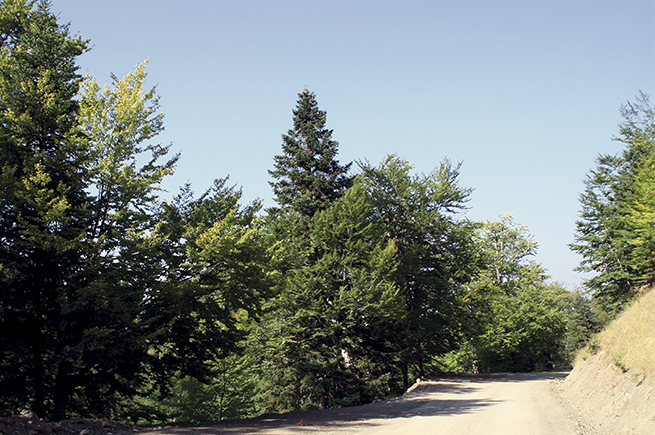 Going for the forest of Oxia.

The vegetation of the village is very dense and colorful with apple trees, cherry trees, cherry plums and plane trees. As in most villages, the church of the Assumption of Virgin Mary is in the square and cafes and taverns on the side. 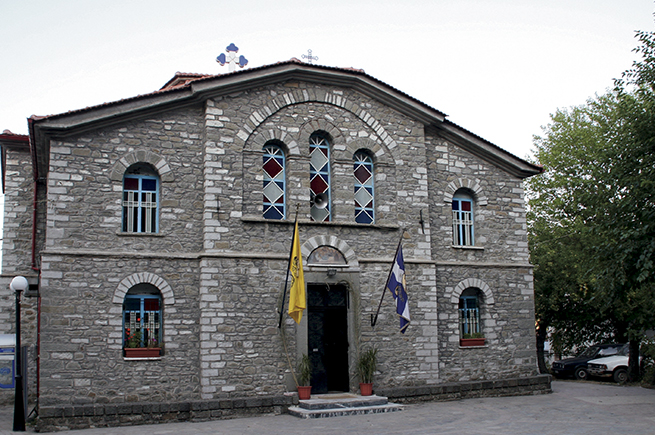 The Church of the Assumption of Virgin Mary, in Pougakia.

We say goodbye to Pougakia and after passing by the village Gardiki, we take the road to the col of Oxia. It is the road (dirt road) that unites Fthiotida with Fokida. We enjoy the route and our solitude, as the landscape is amazing.

After the forest with the fir trees, the first beech trees of the southernmost forest in Europe, begin to appear. As it starts to get dark, we decide to take the way back, after we quench our thirst at the Arvaniti`s fountain. This is the last picture I take with me of this amazing journey. 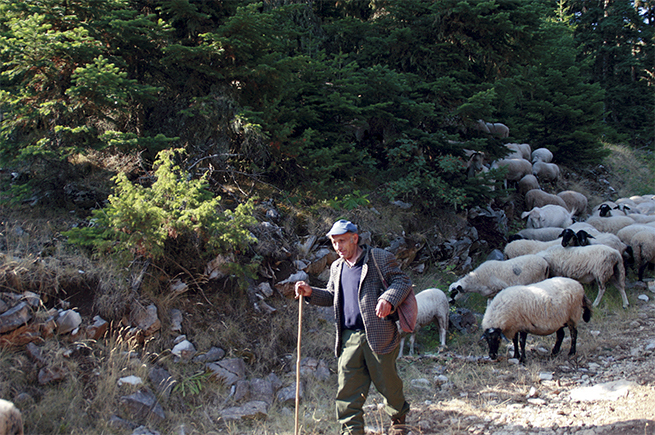 In the mountains, the most common "obstacle" is the shepherd with his sheep.

Spercheios River descends from the slopes of Timfristos to the plain of Lamia, fed by many tributaries until it reaches the Maliakos bay. It forms a large delta and is considered one of the most important wetlands in the area of ​​Central Greece. The valley and the estuary of Spercheios, belong to the Natura network and have been proposed to be included in the wetlands of international importance (Ramsar Convention).

Rice is cultivated in the delta, providing significant areas for finding food to the birds. According to the Ornithological Society, the reproductive species in the Spercheios Delta include little Bittern, stork, collared pratincole and others. The Spercheios Delta is also important for the herons, glossy ibis, spoonbills, that pass through, when they migrate. There are also the species of birds that stay during the winter, like the great egret, the great spotted eagle and others.

The walk in the villages of the Municipality of Spercheiada is coming to its end. Our feelings are mixed, as we did not get to see all the villages as we originally planned. But this will also be a reason for us to make another journey in the future...

What to eat: Roumeli is famous for its taverns with grilled meat.
What to buy: Cheese (milk, yoghurt, etc.).