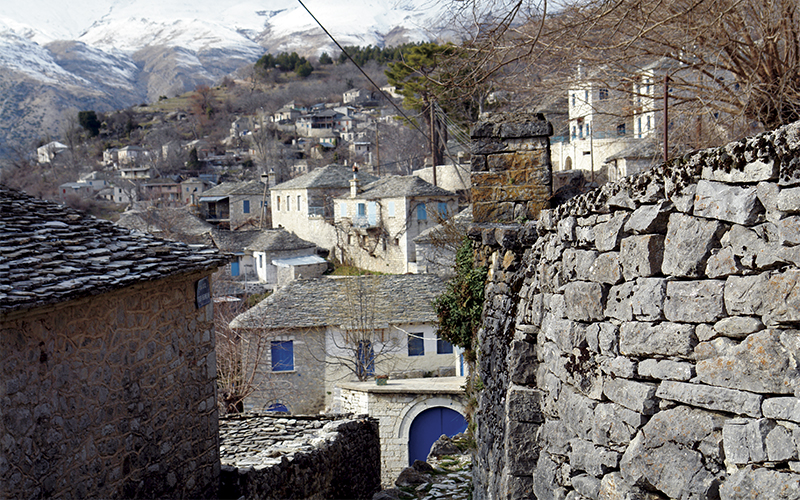 Two of the most beautiful traditional villages of Greece, Syrrako and Kalarrytes, were carved and shaped from very worthy hands, one stone above the other. Without exaggeration, you fall in love with them at first glance! On the lonely mountain peaks of Tzoumerka, they confined their deeply hidden secrets to us...

How to get there
Syrrako, the eternal aristocratic village
To the lonely Kalarrytes
Historical Information about Syrrako-Kalarrytes
It is worth to see and enjoy
What are we going to eat
Activities for strong emotions
How to get there:
Having Athens as a starting point, we first follow the route to Rio Antirrio, heading from there to Ioannina. A few kilometers before the city of Ioannina, we will find a crossroads for Syrrako and Kalarrytes. The roads need our attention, especially the turns. We need to fill our car's tank before we start driving uphill.

So, let’s travel together to these two beautiful Greek villages, which are divided by a deep gorge, but united by the power of the soul of their people in the most impressive place: Tzoumerka.

Perched like an eagle on the steep slopes of Mount Peristeri (or Lakmos), Syrrako stands proudly on the lonely mountain peaks of Tzoumerka. With its stones sculpted from the worthy hands of the Epirot craftsmen, it manages to seduce even the most demanding traveler: the one who seeks the authentic, the traditional, the unpretentious...  For many, it is considered to be the most beautiful mountainous village in Greece. After a long journey among snowy mountain peaks and fir trees, you see it hooked on the steep slopes of Peristeri Mountain, enjoying lazily the warmth of the morning sun. In front of our eyes unfolds the special beauty of a true ancient village. The ring road takes you almost into the village. However, we choose its historic entrance, leaving the car at the parking lot and walking down the old stone cobbled path. It's worth to walk a little further and to take the path that passes over small bridges with running waters, leading us to the traditional settlement. 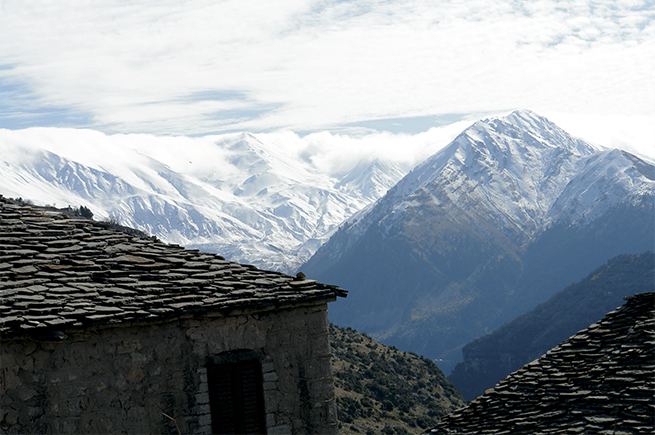 From the Syrrako`s neighborhoods, the view towards the opposite snow-capped mountain peaks is magnificent.

Walking on the paths of yesterday

The stone paved uphill road leads us to the heart of the village. Everything around us testifies to the prosperity that this village experienced in the late of 18th and early of 19th century. It became one of the richest towns in Epirus with 3,500 inhabitants. In those years, Syrako merchants traveled to Europe, selling their handmade famous wool capes, which were so sought-after and popular. It is been said that they have even dressed Napoleon's army.
But there were also difficult days... Syrrako was totally destroyed by the Turks. But thanks to the stubbornness and soul power of its people, it was rebuilt from scratch even better. At the early 20th century it had about 5,000 inhabitants! The woolen capes, however, didn’t sell anymore. The World War II and the Civil War followed. The village deserted again, this time because of the emigration and urbanism. Today, its permanent residents are a few. Syrrako is the origin of the first constitutional prime minister of Greece, Ioannis Koletis, and also the famous poet and writer Kostas Krystallis. The great mansion where Krystallis was born and raised is now visited by travelers and is transformed into a Folklore Museum, bringing us the atmosphere of another era. 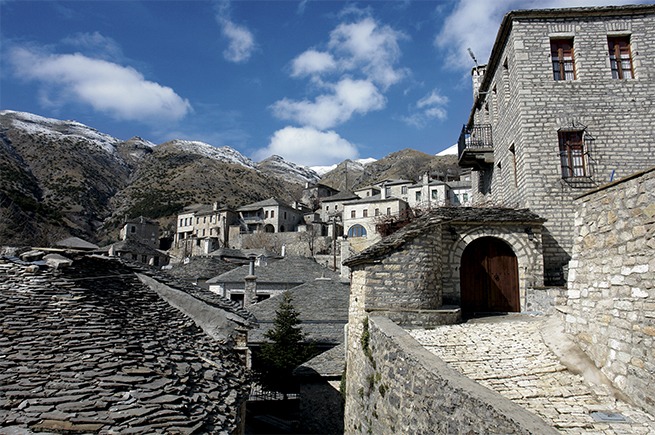 Walking through the neighborhoods of Syrrako, discovering its beauties...

In order to uncover the beauties of this particular settlement, walking is necessary - wearing appropriate shoes of course. As you wander in its neighborhoods, you understand that nothing in this place is a coincidence. The "heart" of the village beats at its stone-built square, dominated by the imposing church of Agios Nikolaos. It is worthwhile to observe the ornate altarpiece, the beautiful dome, and especially the gold-embroidered epitaph of Russian style. Around the square are a few taverns and picturesque cafes. Walking on its paved paths, we discover taps with crystal clear waters and admire the restored mansions. In recent years, some of them have been converted into stylish hostels. Looking up at the top of the village, we see the chapel of the Holly Apostles, which is considered the protector of the shepherds. When the weather is good, the view from there to Ioannina, Lake Pamvotis and Amvrakikos Gulf, is magnificent. 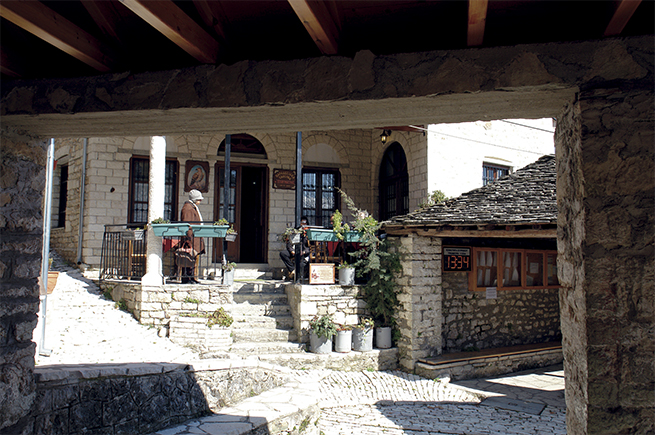 We will also have our coffee in the picturesque café at Syrrako Square.

To the lonely Kalarrytes

Sculptured from stone and with taste by worthy masons, on steep slopes over Chrusia`s gorge or Kalarrytikos River, this stone-built settlement has the signature of genuine traditional beauty at an altitude of 1,200 meters. The home of the famous goldsmiths enchants the traveler with its authenticity. Everything is built from stone, the proud mansions, the simple houses, the imposing churches and the lonely chapels, the elaborate fountains with the crystal waters, the bridges crowning the banks of a river and the central square... The village has been characterized as a preserved settlement since 1975. An hour's walk, through the path that climbs up the steep slopes and passes over the tributary of Arachthos, separates us from the village Syrrako. A route worth doing. 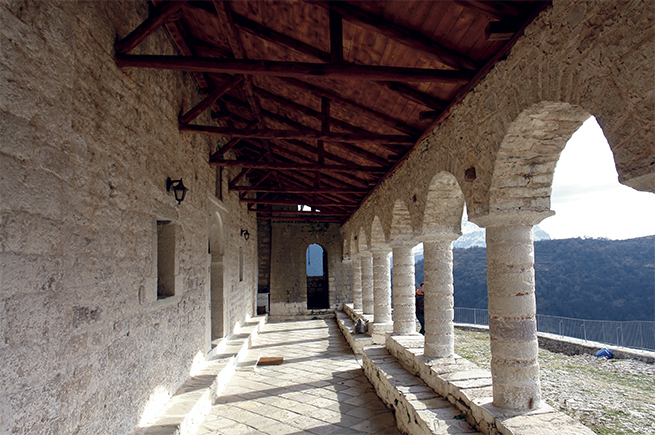 Kalarrytes: The imposing church of St. Nicholas is located in a prominent position in the village with an amazing view.

Cars have no place in a traditional settlement like Kalarrytes. We are going to find out its beauty on foot. The old cobblestone streets, the stone mansions, with the obvious touch of time on them, the sound of the water that runs endlessly in the springs of the village... everything looks magical. The road leads us to the stone square. Here, we will drink our coffee and we shall taste freshly cooked food and the best spoon sweets.  Here is also the small shop with the wonderful folk art, which is worth a visit. As we enter the village on our right, on a hill, there is the church of Saint Nikolaos, with its beautiful view from its courtyard towards the village and the surrounding mountain peaks. 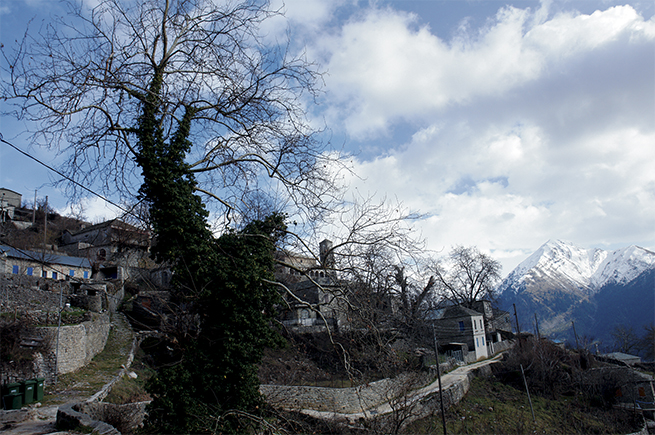 The view to the mountain peaks of the houses in Kalarrytes.

The economic prosperity of the place, was associated with the livestock farming and the manufacturing of capes, as their neighbors in Syrrako did. However, the Kalarrytians, being active and imaginative people, opened new horizons. They organized caravans (the so-called "kyratzides") and transported their goods to very distant places, even beyond the sea. At the end of 18th century, Kalarrytes was at its peak. Many Kalarrytians are opening merchant houses abroad. At the same time, they excel in silversmith, after learning the art from the silversmiths of Ioannina. Famous families of goldsmiths are still known to date, such as the internationally established Nessi and Bulgari. In 1820 the permanent residents exceeded 3,000! The free and independent people (just like their neighbors in Syrrako) did not stand anymore the Turkish yoke and rebelled against them. At the end of the rebellion the village was destroyed and dilapidated. In 1881 Kalarrytes were liberated again, while the Chrusia River (Kalarrytikos) constituted a border between the Greek state and the Ottoman Empire. The two villages, that till then had taken the common path of progress, took different roads until 1912, when Syrrako was also liberated. Migration waves desert the village again. In 1981, the village school closed as there were no children. However, in recent years, the settlement has begun to take over again. On weekends, its neighborhoods become alive by travelers who are looking for whatever is authentic, traditional and untouched. And Kalarrytians certainly compensate them. 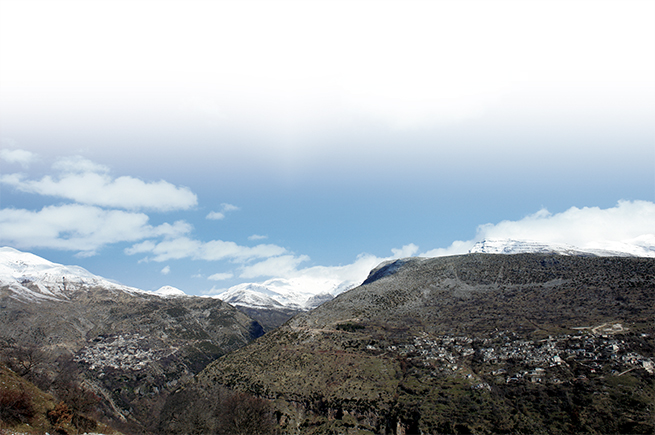 The village Kalarrytes in front and the village Syrrako in the background. Between them a deep gorge...

It is worth to see and enjoy:

• Walk along the old stone path with the bridges in order to get to Syrrako.
• The visit to Kostas Krystalli's home in Syrrako.
• The Folklore Museum, with the traditional wood oven in the courtyard (Syrrako).
• The interior of St. Nicholas in Syrrako.
• Climbing to the chapel of the Holy Apostles for admiring the view (Syrrako).
• The pilgrimage at the Monastery of Kipina
-One of the most impressive monasteries in Greece. We will see it literally lying on the vertical rock, above the road, just after the settlement of Kipina as we come towards Kalarrytes. The priest we met spoke to us for a long time about the history of the monastery over time, but also about the difficulties it faced. In order to get into the chapel, we passed through a wooden movable bridge. As we learned, it sometimes worked to discourage the enemy (they were lifting it up with ropes so no one could come in). We see the small rooms of the monks and its church in a long cave, with frescoes of the 18th century. From the windows of the Monastery, the view towards the gorge and the opposite mountain peaks of Mount Peristeri (or Lamkos) enchants you.
• Rafting on Arachthos river.
• The bridge of Plaka.
•The 20 fountains and the 23 bridges in Kalarrytes 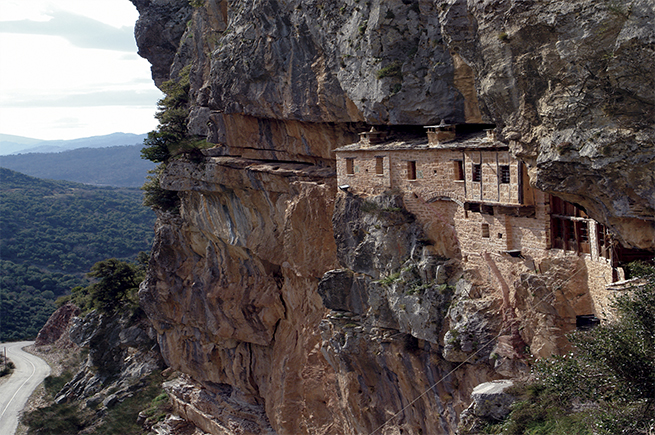 The historic Kipina Monastery hooked on a vertical rock on the road to Kalarrytes.

What are we going to eat:

• Rafting in Arachthos Gorge: A magical descent (3rd degree difficulty), ideal for beginners. We start from the village Ambelochori and we end up on the bridge of Plaka, having crossed the most beautiful part of the river.  Duration of the program: 4-5 hours. Downtime: Approximately 2 hours.
• Rafting in Lower Arachthos: An interesting route (3rd degree difficulty) without requiring previous experience, seeing an impressive part of Arachthos (Plaka - Vacuum).  Duration: 4 hours. Downtime: 2 hours.
• Hiking from Syrrako to Kalarrytes: It is one of the most enchanting hiking trails (easy, ideal for beginners), that connects the two historical villages. We will enjoy a route with wild nature beauty and waterfalls with crystal clear waters. Duration: Approximately 2 hours.
• 4x4 Jeep Routes: If you are fan of the 4x4 Jeep, you will live a unique experience in the forest paths on Mount Peristeri (or Lamkos). Ideal for spring season. 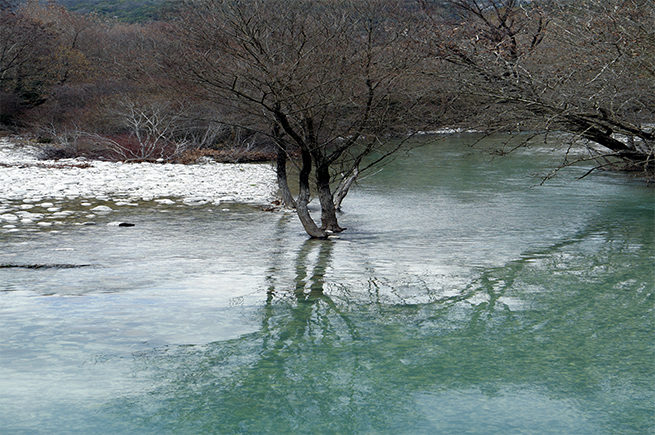 At the riverside of Arachthos...