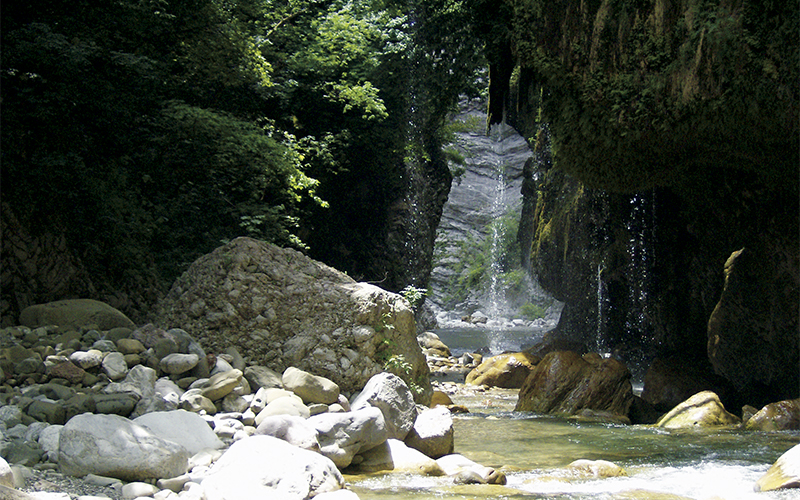 How to get there: Agios Nikolaos Karpenissi is 287 km away from Athens via the Athens-Lamia National Road. From Lamia you turn to Karpenissi passing by Lianokladi, Makrakomi and the villages Pteleas, Neochoraki, Agios Georgios and Tymfristos. Take the 1400-meter-long Tymfristos tunnel and at the exit follow the signs to Agios Nikolaos.

We were looking for the right time to witness a well-hidden secret that got around mouth-to-mouth among nature lovers. We had heard that this is one of the most revealing places, perhaps the most ideal for river trekking throughout the Greek territory. We were looking forward to a unique weekend in the cosmogony of the wild Evritanian land with the main aim of getting wet in the limpid waters of Krikellopotamos and experiencing a little of the watery mysticism of the crossing of the notorious narrow pass between the mountains Platanaki and Kaliakouda, where is always wet... Panta Vrehi means "Always Raining" ! 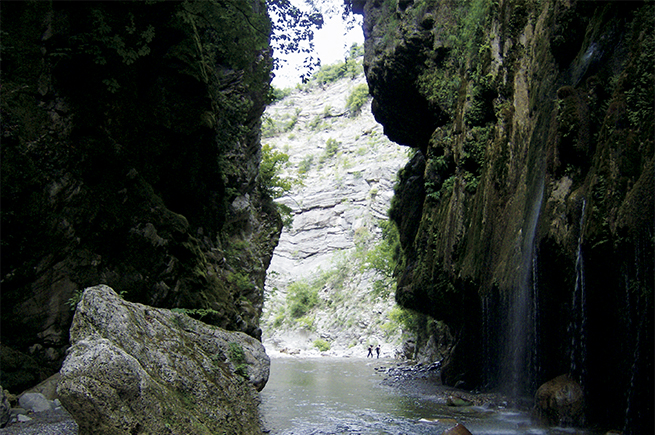 The exact location remained unknown for many years, until about 15 years ago, when companies engaged with alternative activities and started to operate in the area and to attract those who sought unexplored places of unparalleled, incredible natural beauty with impressively rich biodiversity that is not yet fully recorded. 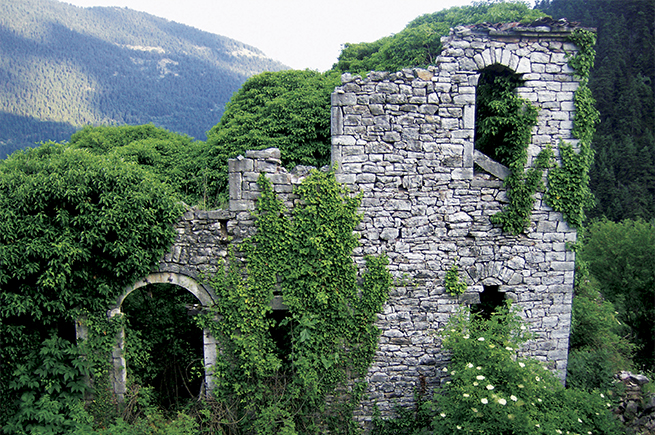 Our guide to this adventure was Christos, who was conceded by the company Trekking Hellas, having the task to enlighten us. The starting point and the base of the excursion was the traditional agrotourism guesthouse, "Gonia tis Linas" (The corner of Lina), in Agios Nikolaos, Karpenissi, at which the active and passionate owner, Lina Hatzopoulou, offered us generously a warm hospitality. 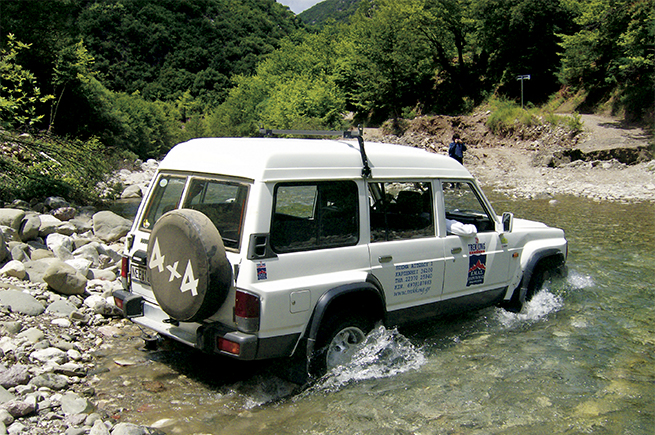 We load the four-wheel drive car and head for Big Village. We leave the asphalt behind us and drive uphill the meandering dirt road at the foot of the northern slopes of Kaliakouda, in a green symphony of plane, oaks, beech and walnuts trees, which gradually leave their place to the countless roots of Greek fir (Abies cephalonica). We make a small stop for cooling down at the water source in the courtyard of the Karpenissi Mountains Reserve and we continue to climb the already bare mountain slopes up to the 1,800m altitude, from where we enjoy the panoramic view to the north towards Velouchi, to the west towards Helidona, to the east towards Vardousia and Oiti and to the south towards Panetoliko and Nafpaktia. 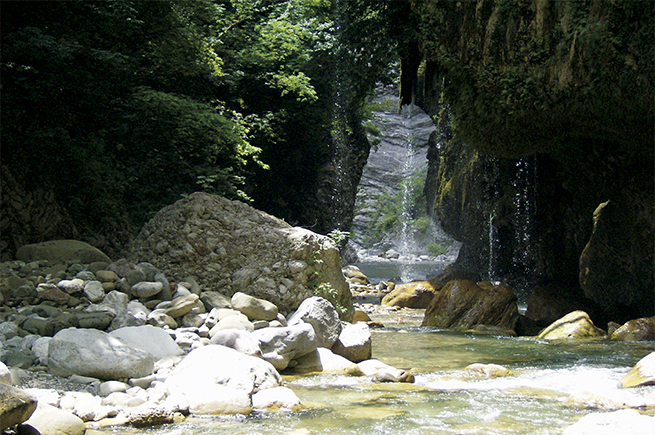 From this point a path begins, which after one hour ends at the top of the mountain Kaliakouda. But we drive the steep downhill curved road, we pass through Doliana and we enter the final line for the long and deep ravine of Krikellopotamos. We wear our neoprene outfits and we are ready for action! 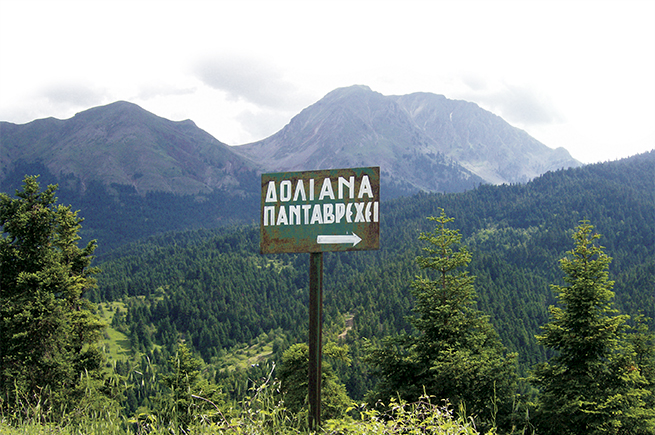 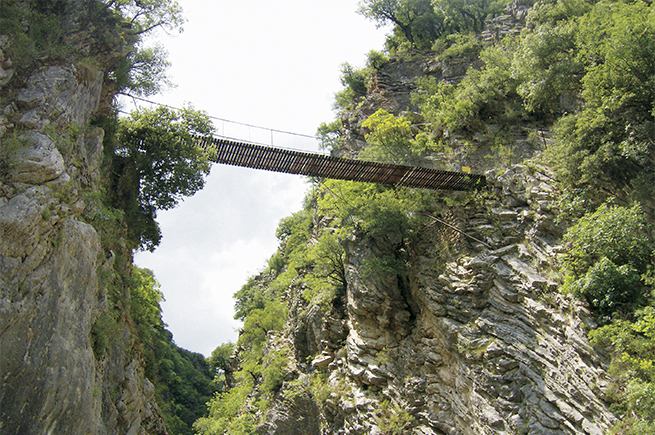 On the path that follows the riverbed, we annoy as little as possible frogs and water snakes, and after a while the first waterfalls attract our gaze, so we put the digital cameras on fire trying to capture the crystal magic, feeling butterflies in our stomach. 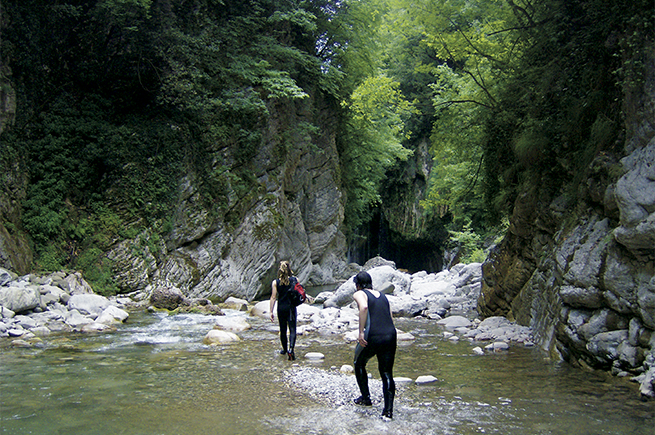 We get wet extinguishing the negative thoughts and we continue to hike and swim in natural swimming pools with a sense of happiness and anxiousness for what will follow. The light is diminishing, and the revelation occurs where the canyon narrows even further composing an embossed complex of successive water stalactites. 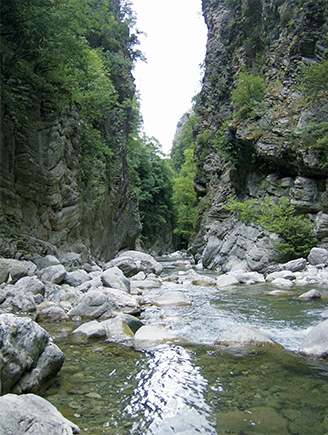 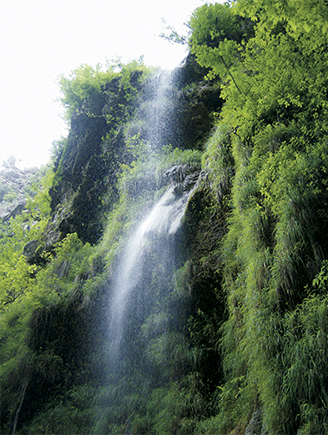 Domes and caves arrest layers of dark green grass, moss and swift wild chestnut trees - with poisonous fruit - letting the water fall with its chilled breath. We cannot stop wandering through this mist atmosphere created by the infinitely intense shower. This moving peak of nature grippes and fascinates. An absolute exotic environment that create a burst of adrenaline and mental uplift. 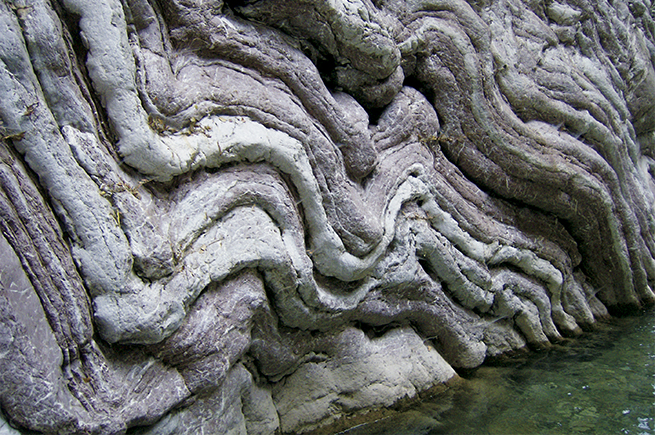 With our batteries fully recharged, we leave the rejuvenating waters of Krikellopotamos to blend with the waters of Karpenissiotis and continuing as Trikeriotis to pour into Lake Kremaston and we take the road of the return once again having enjoyed the unique landscape. 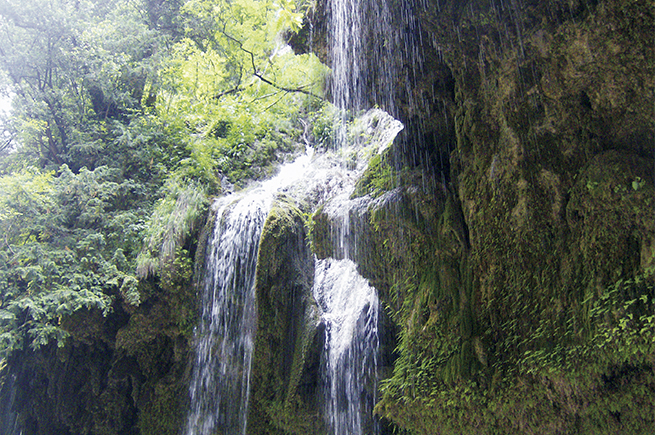 What do you need to carry with you:

For mountain lovers it is a very refreshing summer activity (May to September). You must wear bathing suits, as well as mountaineering sandals or athletic shoes as you will have to swim and pass through a waterfall, have a backpack and a flask, snacks (raisins, chocolates, sandwiches), towel and of course your positive mood! 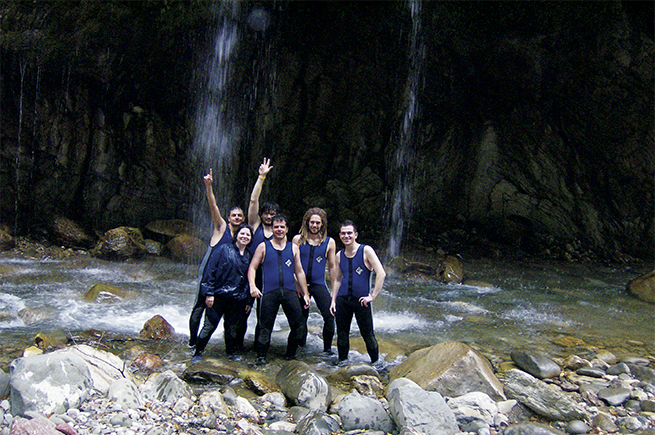 Do not miss to visit:

It spreads amphitheatrically, immediately after the western exit of the Timfristos tunnel, surrounded by clusters of dense chestnut trees. The stone made church of Agios Nikolaos of Vounenis dominates the central square with its imposing bell tower, while in its muddy soil, hence the oldest name "Laspi" (Mud), armed rebels and conquerors have left their marks, hence the nickname "Little Moscow". For a few days in 1942 Aris Velouchiotis was also hosted in the village, specifically in the historical hut of Vassilis Siafakas. In these same areas, the famous «hantrelia», beans for which the village is famous along with chestnuts and spoon sweets are systematically cultivated. In the surrounding area you will find many remarkable locations, such as the chapel of Agia Paraskevi where you will be cooled by the cleanest waters of Evritania according to the World Health Organization. 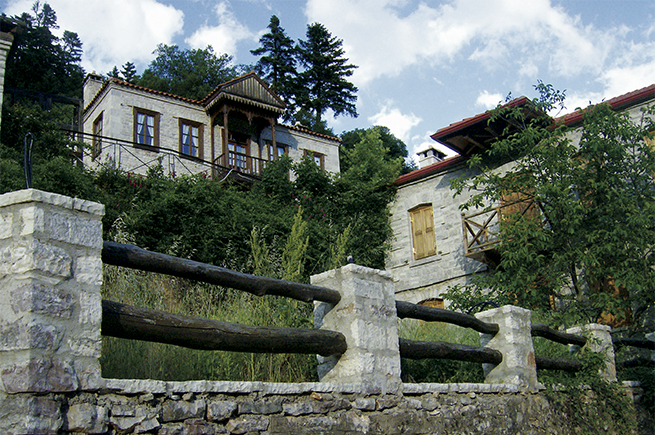 On July 26, every year, a three-day feast is being held with a reunion of migrants returning from America. If you cannot be present at this date, you can participate in the Forest Feasts which are held every August. The surrounding mountains run through easy dirt roads, ideal for hiking and mountain biking and some more rugged for unrivalled off-road situations. Very close, in a green environment, you will also find the modern 211-acre Sports Center, in which many athletes do their workouts due to the ideal climatic conditions that prevail. 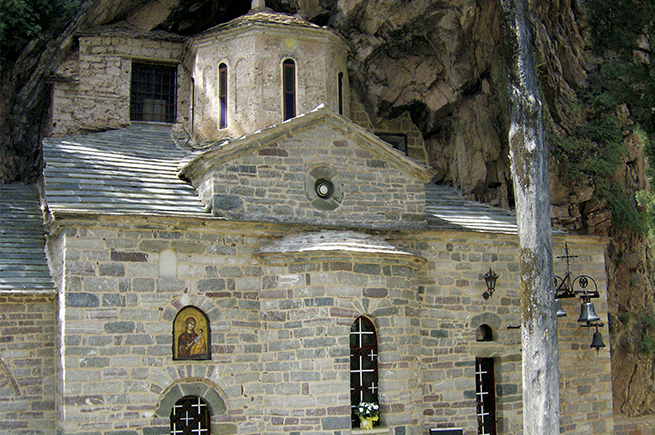 It is worth taking a detour to admire the magnificent mosaics of the 6th-century, three-aisled Early Christian basilica. To see them, you must first find the priest papa-Spyros who keeps the keys and who usually sits in the village square! He will accompany you and tour you in the temple that was discovered accidentally after a great rain in 1955 by locals who cultivated their fields.

Museum of National Resistance in Koryschades

The museum is in the square of the picturesque settlement with the well-preserved stone mansions, most of them converted into traditional guesthouses. It was founded in 1997 with the aim of disseminating the history of the National Resistance through mainly printed material. It is housed in the building of the preserved elementary school, where the National Council of Free Greece met on 14 May 1944. Photographs from the collection of Spyros Meletzis, the so-called photographer of the Resistance, are exhibited from the period 1941-44.

After walking on the paved cobbled path that leads to the south side of the settlement, you will find the folklore Museum. It was founded in 1981 and is housed in a stone mansion belonging to the businessman Bartsiota with his origins from Constantinople. In its 6 halls there are objects of everyday use, traditional costumes, embroidery and weavings, a loom and a range of objects and tools of traditional professions, such as the stone worker, the quarry worker, the farrier and the barrel maker. It also has a very good library. 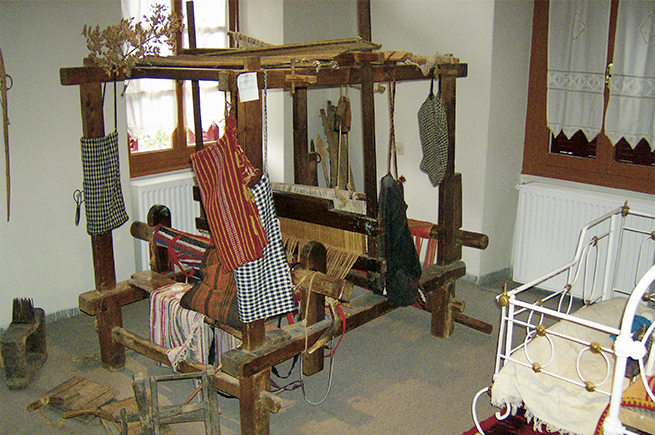 Just before you reach the first houses of the village you will see on the right side of the road an improvised sign that shows you the path. Follow it and after 200 meters you will find yourself in front of a deep hollow that is filled with water from the surrounding streams, a creation of the 1963 landslide and the consequent spoiling of the soil.

It nestles on the edge of the cliff, in the middle of an idyllic landscape. In its main chapel, pilgrims from every corner of Greece flock to the icon of the Virgin Mary of Prousiotissa, which was transported in the 9th century from the Prousa of Asia Minor, to be saved from the iconoclasts. Today, only 3 monks lodge in its cells, looking for contact with the divine overlooking the lush slopes of Panetolikos. In the Museum of the Monastery, among other heirlooms, Karaiskaki`s sword is also exhibited. Karaiskaki`s Towers are maintained in a very good condition and they stand at two strategic points, east and west of the Monastery. They were built in the 17th century to protect it from the persistent raids of the Turks. 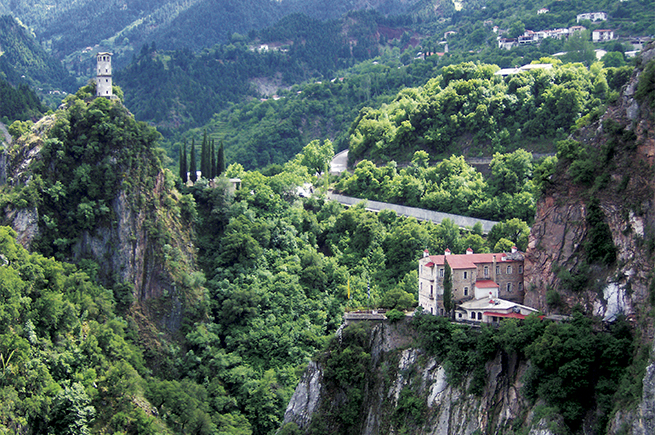 It is located on the opposite side of the village, very close to the Stremmenos charcuterie shop and is about half an hour's walk, along a path full of successive waterfalls, ponds, running waters, bridges, in a green environment that leads to the famous cave. Here the rebels found shelter during the Civil War. 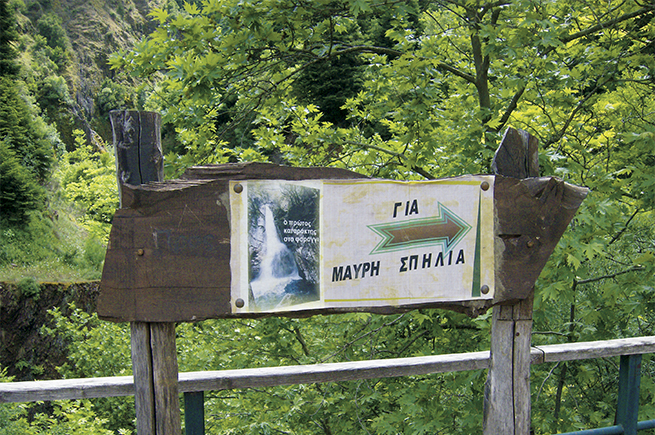 Rivers in Greece that are offered for river trekking:

Apart from the magical Panta Vrehi in Evritania, you can visit Neda between Ileia and Messinia, Enipea`s Gorge in Olympus, Ramnos Bor (Loutra Pozar) Gorge, Geropotamos Gorge at Mount Kaimaktsalan in the Prefecture of Pella, Aoos River in Konitsa , as well as the river Acherontas from the beautiful village of Gliki below Parga in Epirus.