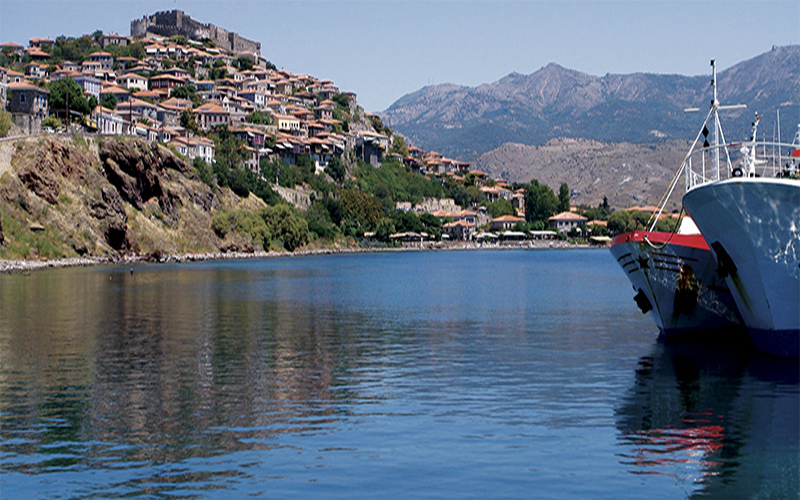 A traditional settlement that adorns Lesvos and enchants us with its architecture, its scenic look and its view to the endless blue of the Aegean Sea.

In its hospitable port, grilled octopuses await us to enjoy them together with locally made ouzo and good company... 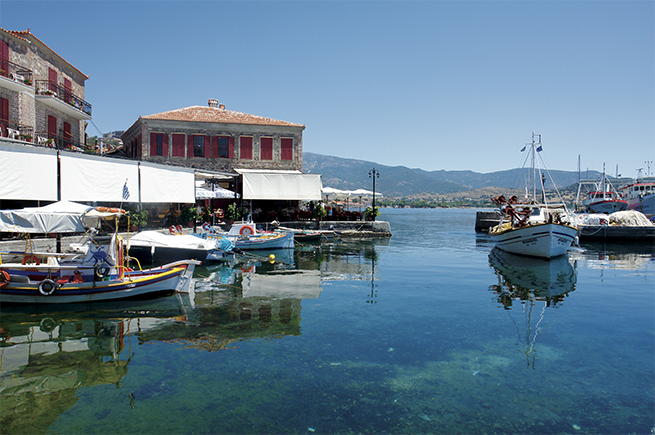 Built in an area that was once famous for its vineyards, Molyvos (Mithymna) is the most picturesque traditional settlement of Lesvos. The ancient bondage of this island with the Aegean Sea, is imprinted on the daily life and the soul of its people. Molyvos lies lazily under the protective "gaze" of its proud castle which is standing there, at the top of the hill, a remnant full of memories of the old days... 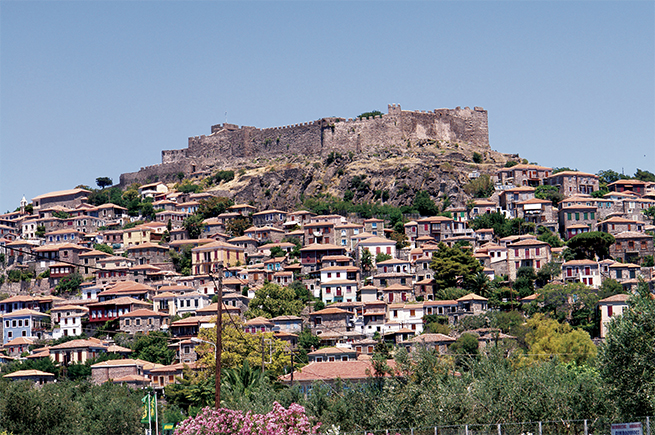 It is the second largest castle in the island. In 1373, Genoese Francesco Gattilusio, reinforced its walls with battlements and fortifications to endure the time... During summer, in the small theater that is located here, cultural performances are hosted.

Breezeways, arches and stairs guide you to its picturesque neighborhoods. Houses made of stone and wood, quadruped roofs with red tiles, bold coatings, doors and windows in the colors of the earth and the sea... Is like you are walking in a living painting, full of color and emotion! Some mansions from the 18th and 19th centuries are very well preserved, transferring us to other times. 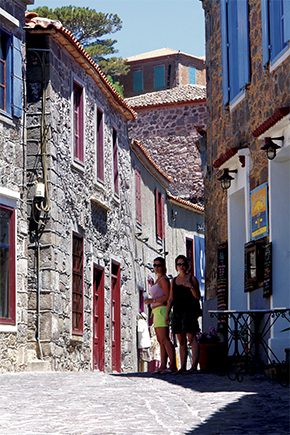 Typical mansions are of Giannakos and Kralis, which today belong to the School of Fine Arts and have an excellent interior decoration. Among the traditional houses of rural and Macedonian style, we discover some impressive mansions of neoclassical architecture. 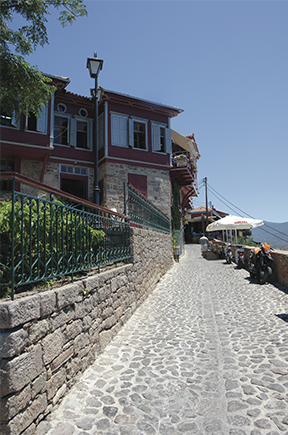 Walking in the streets of Molyvos, it seems like time has stopped. Walking under the summer sun, it is a “must” to get refreshed in one of the stone fountains with the stone-carved inscriptions. Afterwards, discover the old baths and visit the church of Saint Panteleimon (19th century), as well as the Taxiarchis basilica (18th century). Of great interest are the Municipal Library with 9,000 volumes, the Municipal Art Gallery and the Town Hall.

On the paths of yesterday...

Molyvos is built on the ground that formerly flourished the ancient city of Mithimna, which was a great commercial, artisanal and artistic center with interconnections to Asia Minor. It participated in the Athenian Alliance, Peloponnesian War and was occupied by the Romans. Then, a difficult period for the place followed, with pirate raids and occupations by Saracens and Crusaders. From the 11th century, the Genoese occupied the island and remained on the island for about a century.

The name Molyvos originated from the corruption of Mont d 'olives (a hill with olives), as the place produced (still today) extraordinary oil. The Genoese conquerors reinforced its walls, promoted the cultivation of olive and its products, making Mithymna a great commercial centre. During the Ottoman domination, it was the administrative center of the conquerors in northern Lesvos.

During the 18th century, the inhabitants of the island had the control of the trade, having as a result the economic prosperity and the creation of the bourgeoisie. However, difficult times came after the Asia Minor Catastrophe of 1922. We should also mention that the island was not only a commercial centre, but also birthplace of spirit and art.

We recommend starting your stroll in Molyvos from above, from the base of the Castle and descend walking through its neighborhoods, enjoying the wonderful view. You can of course rest for a while in some of the picturesque cafes or go for a walk in its breezeways, browsing in the shops and the market. After exploring the settlement, you can descend to its harbor with the fishing boats, the ships and the shipyards, where work never stops. The fishermen stretch their nets on the quay and prepare for the next catch. In the taverns, with their tables placed beside the sea, you can enjoy local snacks and fresh seafood, accompanied with the famous local made drink ouzo. 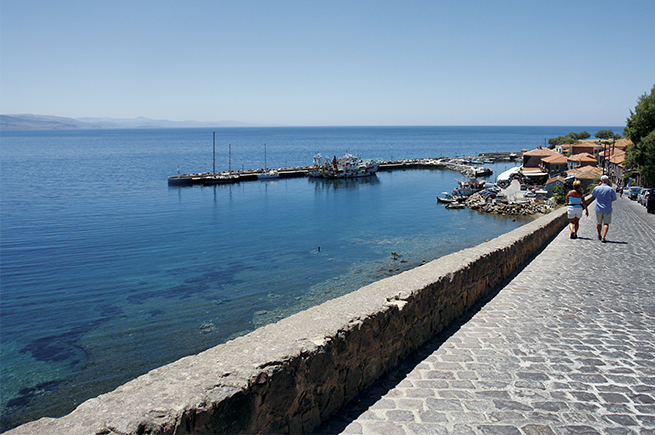 It is worthwhile to walk on the edge of the waterfront to enjoy another fantastic picture of Molivos, reflected in the tranquil waters of Aegean Sea. From its harbor, boats start their guided tours to the nearby beaches, as well as to the points of the island of unique beauty. Particularly magical is boating at sunset...

If you like hiking, in Lesvos you will be able to make several interesting trips in green areas or overlooking the sea. A very interesting hiking trail is the one that starts from Molyvos towards the direction of Eftalou. At first walking on the main road and then on the side street which leads to the Argennos Hot Springs, you will arrive to Sikamia with its picturesque harbor and the chapel of Panagia Gorgonas built on a big rock. It is a beautiful excursion of about three and a half hours (with stops). 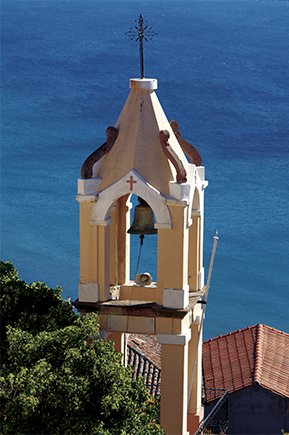 Advice! Do not forget to wear the appropriate walking shoes, hat, long pants and cotton shirt with sleeve (not with straps, avoiding the sunburn of the shoulders). Also, you always wear sunscreen on your face and your uncovered parts of the body. Prefer to start early in the morning, because the sun is not joking... It is good to have someone who knows the area. In the municipality you can be informed about the guides. 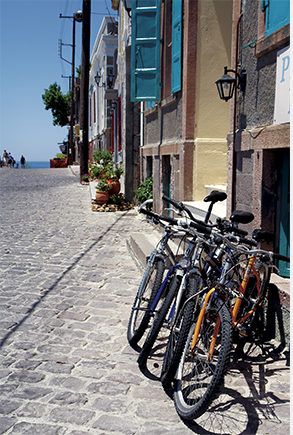 It is worth seeing: 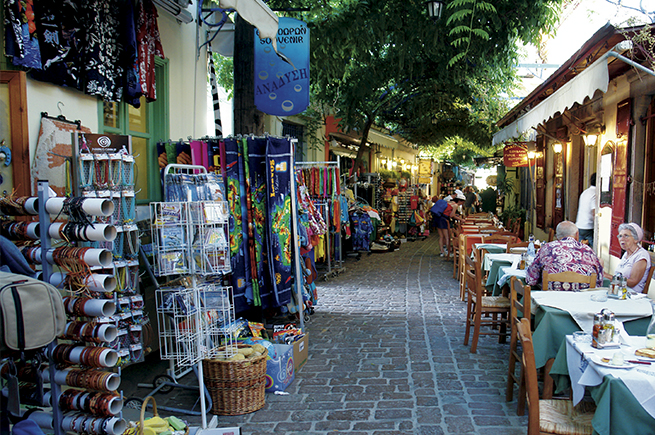 Hiking on wooded trails all over the island (for more information, please contact the Association of Guides North Aegean and Islands: 22510 43818) 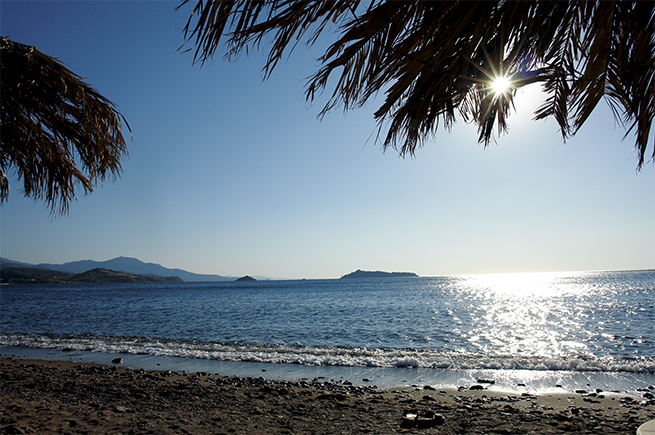 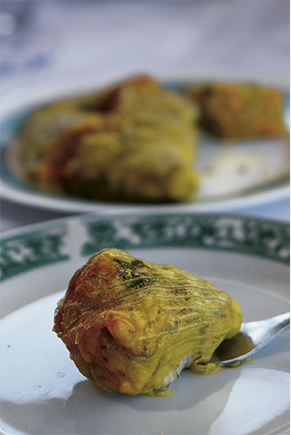 Ladotyri of Mytilini, wood carvings, pitchers and halva from Agiasos, sardines of Kallonis.