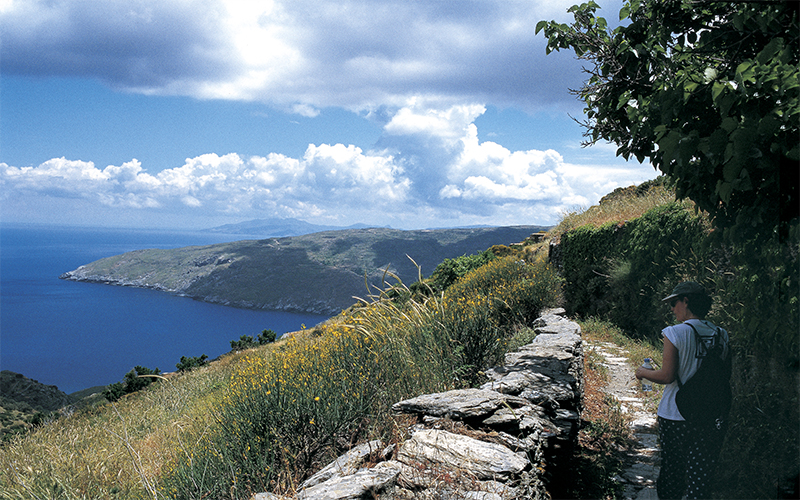 A true paradise for hikers!

The island ofAndros is very close to Athens, just one hour by speed boat from Rafina. Although it is a Cyclades island, it is very different from the other islands due to its plenty of water and being very green. My first acquaintance with the island took place a few years ago when I made my holiday in Korthi, a beautiful cove, located on the south-eastern side. The beaches are fantastic, the villages are unique.

The following year, I went back two times. So I got to know the island better and - above all - its paths, as there are many cobbled streets in Andros, most of which are kept in a very good condition. We were given a unique opportunity to meet the true Andros, Andros, which is not limited to touristic places. The paths are marked and most are numbered.  A route that can be done goes through the villages of Menites, Lamyra and Mesathouri and ends at Chora, while another starts from Syti, crosses the famous Dipotamata and ends up in the village of Kochilos or, for anyone who wants even more, to Korthi. A light backpack with some food and water, a hat and walking shoes are all you need to get started. 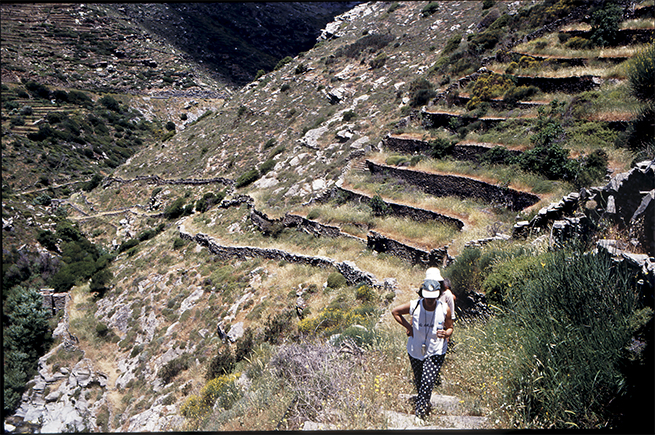 First route Menites-Neiborio: The village of Menites is located on the eastern side of Mount Petalos, possibly named after the ancient Maenads, the nymphs of the god Dionysus. It is the of the most green and cool areas of the island. Trees, orchards, ponds and running water compose the scenery. You will be impressed by the perennial plantains, with their thick and twisted trunks, the water-lined ponds, the stone troughs - of unknown age - once named Dionysus springs and the troughs which were formerly used to wash the clothes.
On the west side of the village you will meet the crystal clear springs of Koumoulos. There is also the sanctuary of Panagia Koumoulou, which some claim to have been built at the site of the ancient temple of Dionysus. This place of the village is also called Karydies (walnut trees), from the trees around. The village is full of waters and springs. Below is the spring of Fountana, flowing depending on the season, and the source of Molivaria. The area is also known for its many Byzantine small churches, such as the church of St. George of Vathia, built in the 12th century, and Virgin Mary of Verg, known for the wooden trellis at the upper floor, one of the few surviving trellis in Greece. 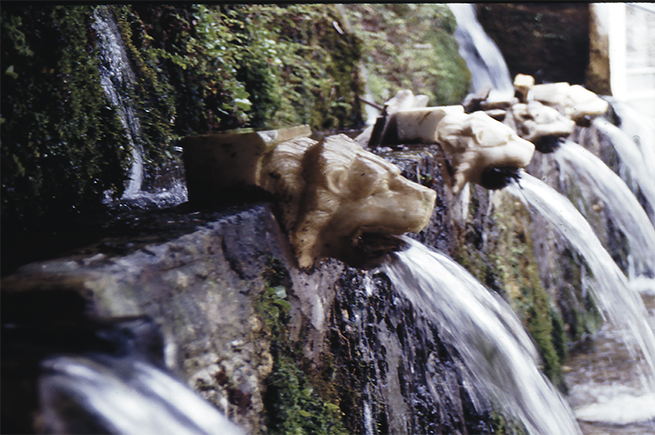 Spring, is the best season for trekking, as nature releases all her fragrances.

Gardens with trees and wildflowers, such as anemones, bells and irises, fill up the place. In Andros there are many endemic plants (about 80), which cannot be found in any other place. On the way to Lamira and Mesathouri you will find many well-preserved stone houses and mansions, the so-called tower houses, coming  from another era. Rocky walls, created by stones one beside the other, are all over Andros. They look like primitive monuments, as the shale plates stand up, as if to protect the space they surround. After about two hours, the trail ends at Neiborio, next to Chora. It is the appropriate place to taste delicious local specialties in one of the many fish taverns. 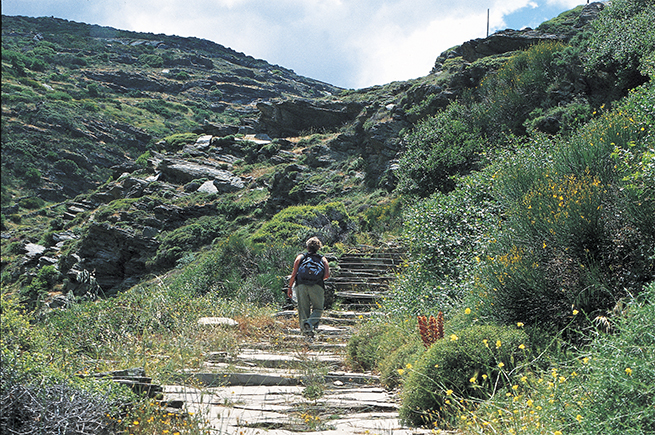 Second route Syneti-Korthi: This route is beautiful and interesting. The gorge Dipotama, was named from the river that crosses it, and was created from the union of a small river and a stream. The journey takes 2 to 2.5 hours or more, depending how fast you go. But what's the hurry when you are in such a magnificent landscape! The path starts from the village of Syneti. At first it's a bit uphill, but after, its easy. It leads you to the asphalt road for about 600 meters and then enters a dirt road, descending down to the stream. Until you reach Korthi, you will walk on a cobbled path, which is part of the old road that connected Chora with Korthi until 1950. The environment will fill you with energy but also peace. Due to the fact that people stopped using this route for decades, it is most likely that you will not meet anyone on your way, unless, perhaps a hiker. The river that crosses the ravine has not a lot of water, but it never dries. There are trees and plants, such as myrtle trees, oleanders, reeds, mulberry trees, bushes, wild oak trees and wild berries, as well as some animals such as buckwheat, hare, ferrets, snakes, and many birds. At the point where the trail joins the river, you will find an arched bridge. Here you can stop for relaxation and take commemorative photos. Here you will meet another feature of the area: the watermills. 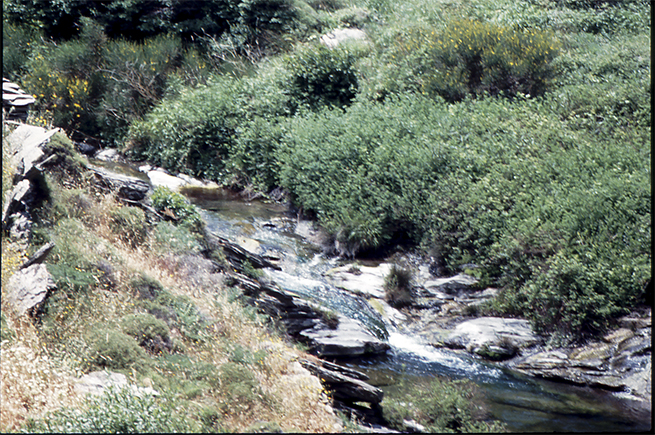 In Andros island, as there was always plenty of water, the watermills were much more used than the windmills and the village Dipotamata was the ideal place for setting them up. Today, 22 watermills are preserved, some in very good condition. These mills grinded barley until the 1920’s. Many of them have nearby or adjacent auxiliary buildings, such as the room of the miller, the corral, the stables or the warehouse. They are samples of pre-industrial technology, characterized by originality and functionality, which is why they have been proclaimed newer pre-industrial monuments. The Andros watermill is the type of horizontal watermill as it was used in the eastern Mediterranean, adapted to the needs of the island. It is a very strong stone construction that could withstand the pressure of the water. You can find such types of watermills throughout the island, but mainly in the gorges of Dipotamata and Frussia.

Continuing the second route to Korthi

Going uphill, you leave behind the gorge of Dipotamata, which has been characterized as protected area. On the left, you will see the Upper Castle or Castle of Faneromeni. It is an impressive castle town built by the Venetians in the 11th century, at an altitude of 600 meters, to protect the inhabitants in the area. In order to go to Kastro (Castle), where the church of Faneromeni is built, you will have to walk down the dirt road and climb 143 stairs. The route takes about half an hour, but it is worth the effort and the view is unique. The castle is also called Gryas (old lady) Kastro, a name that links it to an old legend, according to which Turks, in order to go inside, sent an old lady with her pregnant daughter to ask for help. When an old man opened the gate of the castle, the Turks came in and slaughtered the inhabitants. But the old lady regretted her act and fell off from a tall rock in the sea and drowned. The beach below, was named, Pidima tis grias (the old lady`s jump)!
On your way back, continue to Kochylou. In order not to miss the path, follow the marking that continues in the beautiful village, which is at the foot of the Upper Castle plateau. The church of Saint George and a picturesque café stand out. The view here is wonderful too. After a small stop, walk down the path, which is now restful, because it goes down smoothly. You'll need about half an hour to reach Korthi. There, you can sit on the beach and drink ouzo (traditional drink of Greece) and eat delicious food, in one of the traditional taverns in the middle of the bay. Be rest assured that this will reward you for your efforts! 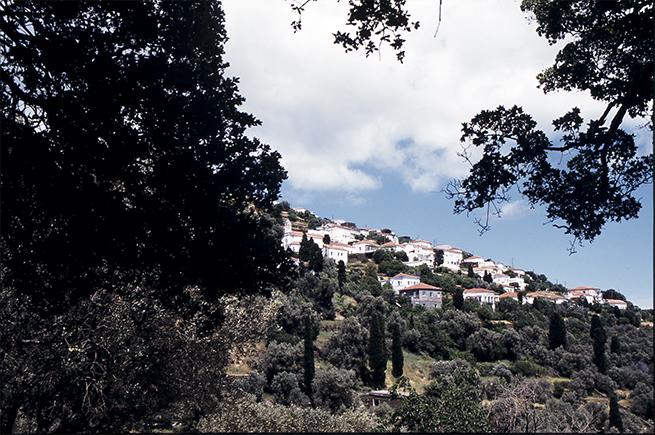 Andros is the northern and the second largest - after Naxos - island of the Cyclades. It is located between Evia and Tinos. It has an area of ​​374 km2, a maximum length of 39,8 km, a maximum width of 16,7 km and its coastline has a length 177 km. Its highest mountains are Petalos and Kouvaras with the highest peak Prophet Elias, at 997 m. Four rivers run through the island from the west to the east, through fertile valleys. The river Arni, which flows into Lefka, Great River, which flows into Paraporti (Chora), Achla, which ends at the homonymous beach and  Dipotamata, which flows into Sounti. Andros also has thermal waters in some areas. The most famous are the the ones of the spring of Sariza that are bottled in the homonymous village. Other springs are Zenio in Kouvaras, Koumoulos in Menites, Meliti and Metochi in Strapouries, Abyssos in Livadia and Akoi and Livada in Lamira.

Andros has many trails, each with its own beauty and history.Hiking in these paths, is an unforgettable experience!

Hiking in Andros with: www.androsroutes.gr 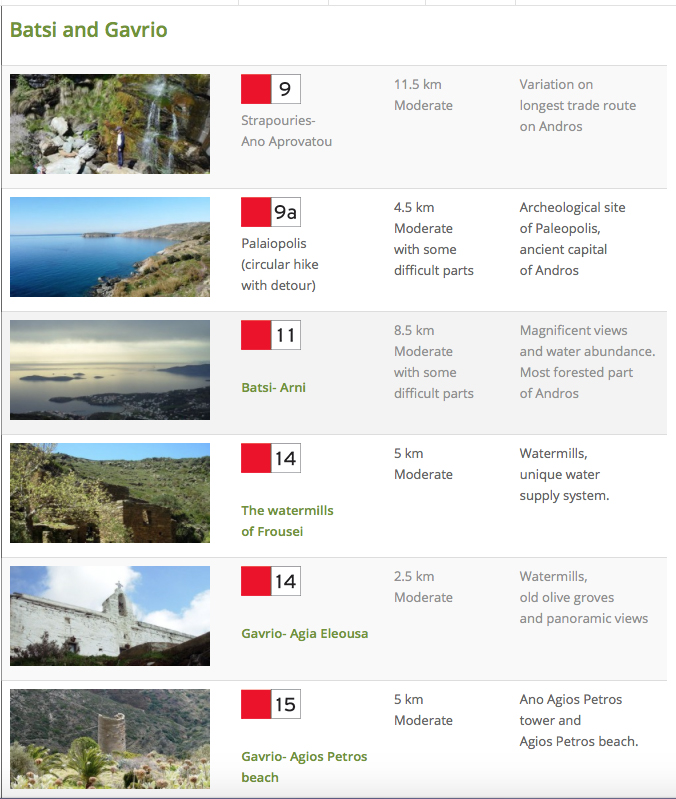 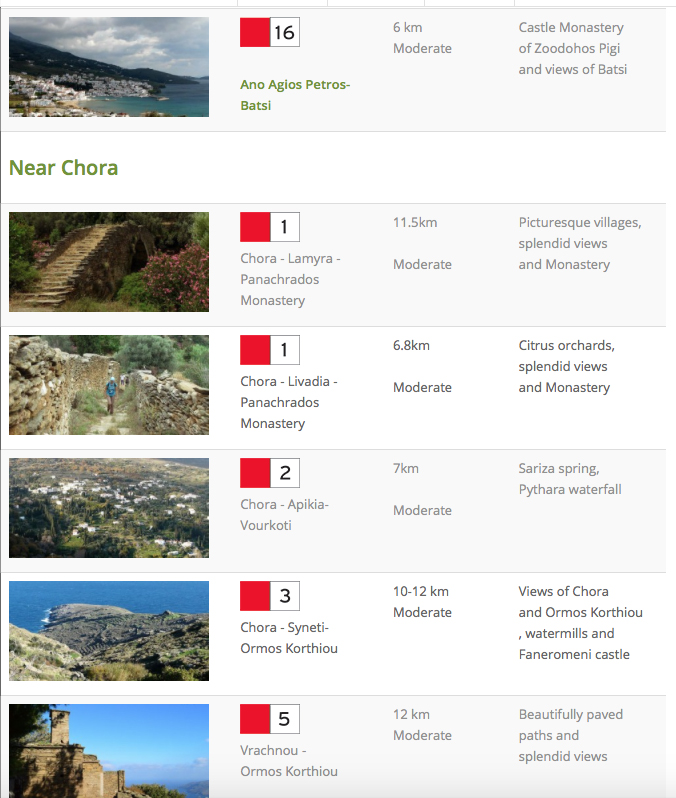 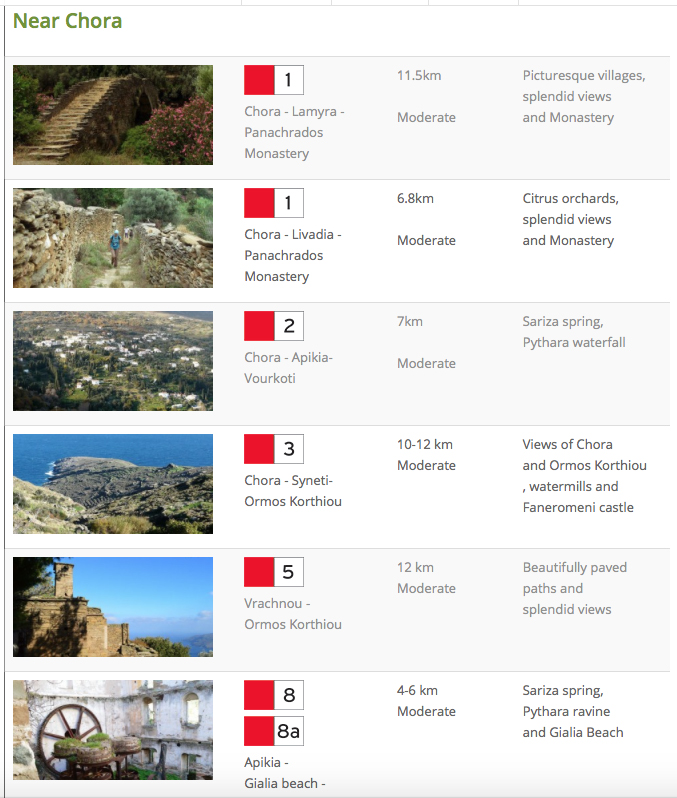 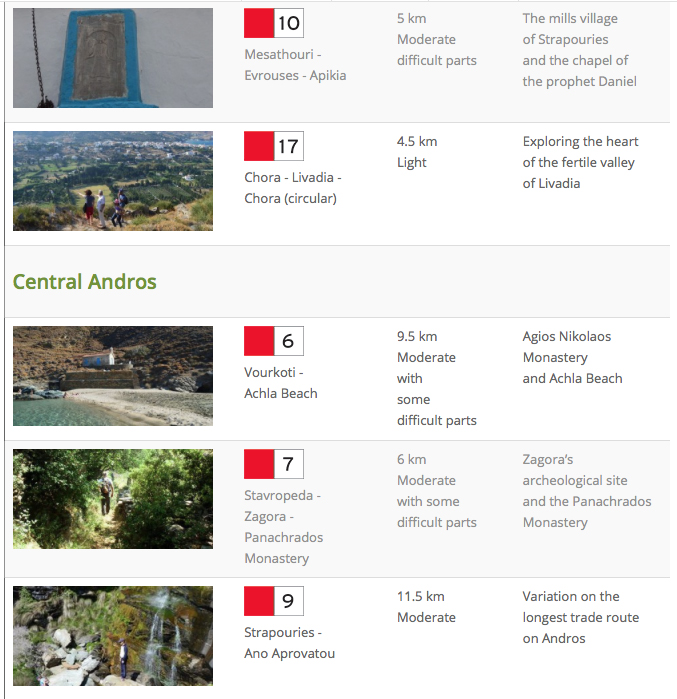 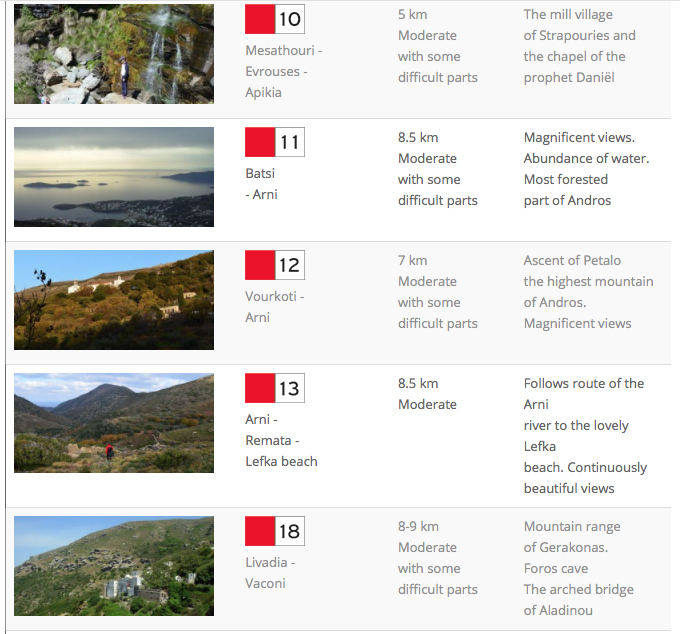 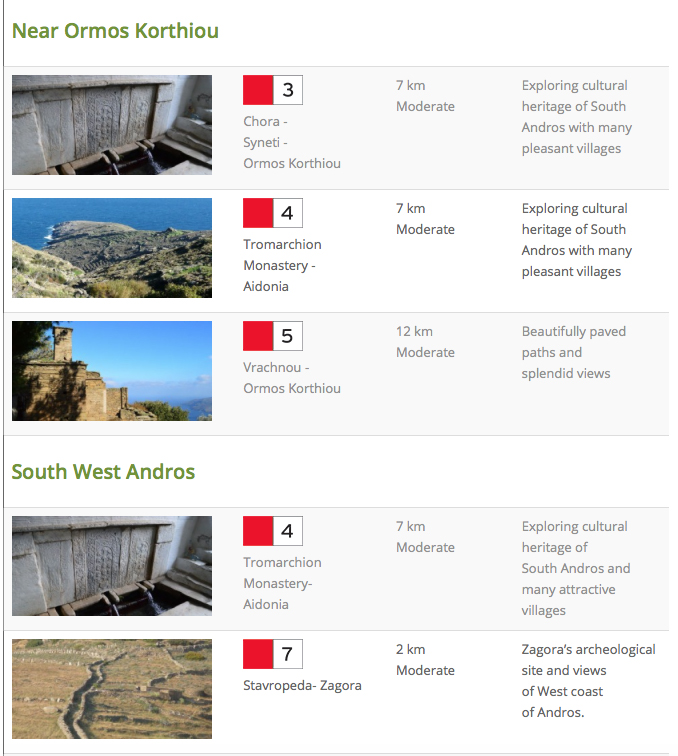 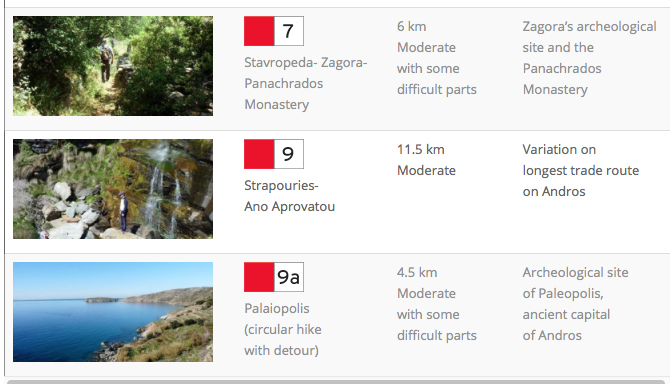 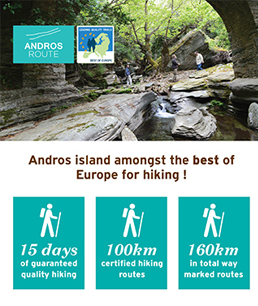