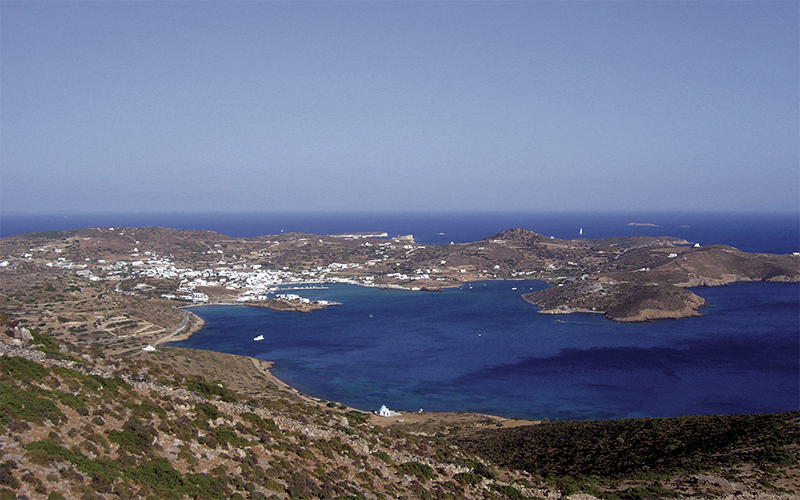 I left the small marina behind where I park my boat during the winter, having in mind the pleasure of drinking a cold beer escaping from the hot summer sun under the shade of a plane tree or a good coffee with the sunset as background, or a glass of ouzo (Greek traditional aperitif) with seafood sitting next to the waves. I know that this is waiting for me every time I enter my inflatable boat and sail the Greek seas.

The Dodecanese is a destination for trips for more than a weekend. Good weather is required, up to four beauforts, because a hundred and fifty miles is not a small trip. So, with a slight breeze, together with my family I launched into another wander into the big blue sea.

Arki, with the most turquoise colors of the Aegean Sea

How to get there (if you do not have an inflatable boat): In summer the island is connected twice a week with Patmos, Chios with its local boat and excursion boats or charter boats on a daily basis from Lipsi. 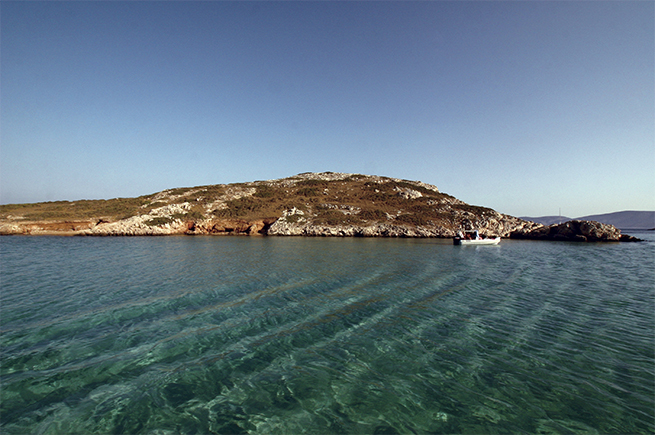 After around four hours of cruising in a calm sea, we reached Arki. One of the least advertised islands in Greece is Arki, with a permanent population of only 40 inhabitants. It is the largest of a cluster of islands, north of Lipsi. The only settlement and port of the island is located in the depth of a very safe bay. Around Arki there are the smaller islets of Marathi, Smineronissi, Tsouka, Tsoukaki, Avaptistos, Makronisi, Psathonisi, Kalovolos and Nisaki. The greatest delight of this island is the lack of mass tourism.
Only during August, the island is in full excitement - if you visit it during the rest of the year, it will be all yours! Around the square, located at the harbor, you will find various taverns and cafes, offering delicious, local food. 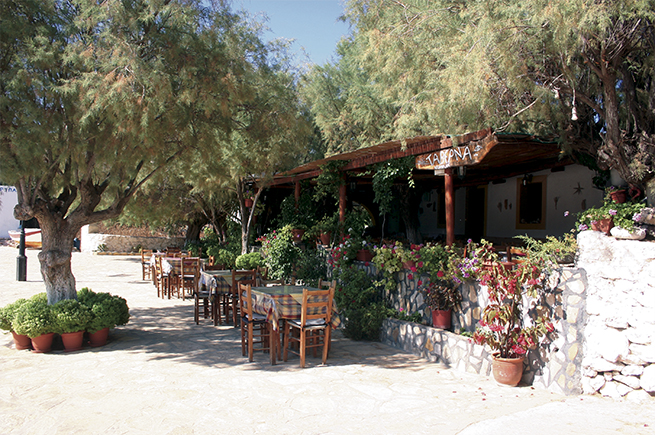 The biggest beach of the island is Tiganakia. Tiganakia is a marine area, perhaps with the most turquoise waters in the Aegean Sea. It is located in a small bay and part of it is sandy while the other is pebbly. It is ideal for swimming. It is about 45 minutes walk from the settlement of the island. There is no trail, but only a signpost that directs you. To get there, you will take the road of the settlement, you will pass by some bays to your right and when you reach the end of the road you will go straight until you see the sign. Follow the directions and go towards the island you see opposite. It may sound tedious, but it is really worth it. Other beaches are Limnari, Patelia, Kapsaliasmenos and there are more of other small beautiful bays. 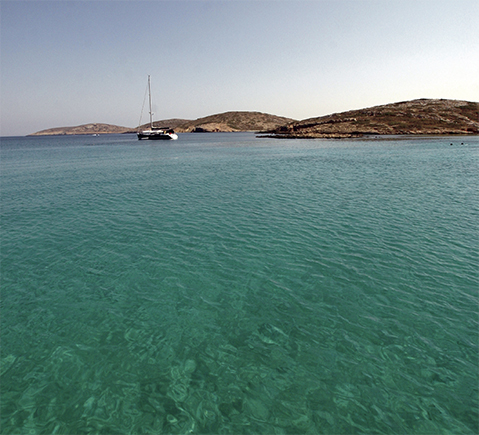 At the top of the highest hill is the picturesque church of Panagia Pantanassa and the old settlement of the Achaeans. From this point the view to the islands is breathtaking. The festivity for Holy Mary, on 23 August, is a unique opportunity to get a taste of local cuisine, hospitality and entertainment. If you like hiking, in about an hour on foot, on the back side of the island, you will discover a wonderful cave with stalactites and stalagmites still virgin and unexplored.

For food: You will definitely try local cheese, oysters and feta, fresh seafood, lobsters, squid, octopus and fresh fish. Local lamb and goat traditionally cooked. Also traditional cheese pie and the sweet "pougi", made of crust and almonds, sprinkled with honey or syrup. 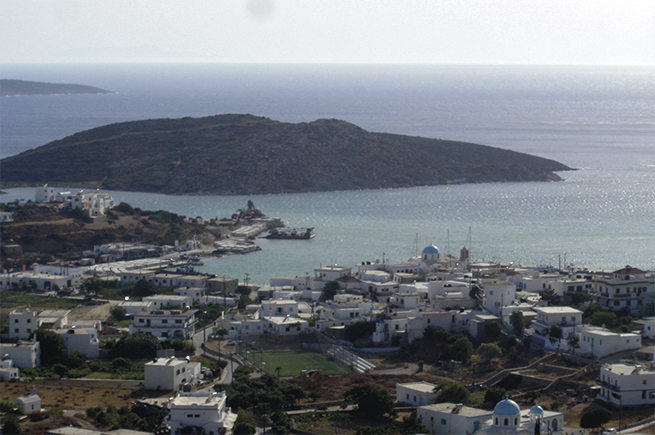 Approximately three miles south, there is a cluster of islands named after the bigger island Lipsi, that consists of two volumes of land that are joined by a narrow neck 400 m wide. It is the only inhabited island, with a total population of about 600 inhabitants. Around Lipsi, 24 rocky islands and 6 rocks form an impressive polynesia. It is a quiet island, still outside the great tourist flow, ideal for someone who wants to spend peaceful holidays and enjoy the sun, the sea and the companionship of its hospitable inhabitants. The size of the island is such that you can cover most of its distances on foot, or by motorbike or bus.

The church of Panagia tou Harou, one of the oldest and most important of the island, was built around 1600 by the monks of the monastery of Patmos. It took its name from the exquisite icon of the Virgin who holds in her arms the dead body of the Crucified. Since 1943 the church has been known for the miracle of the lilies. This miracle is repeated every year since April 1943. Every spring, the faithful people place lilies on the image and let them there until they dry. On the day of the celebration at the dry branches, buds are coming out and open. After the Vespers, pilgrims and locals celebrate in the two squares of the village eating and dancing under the sounds of traditional folk groups. 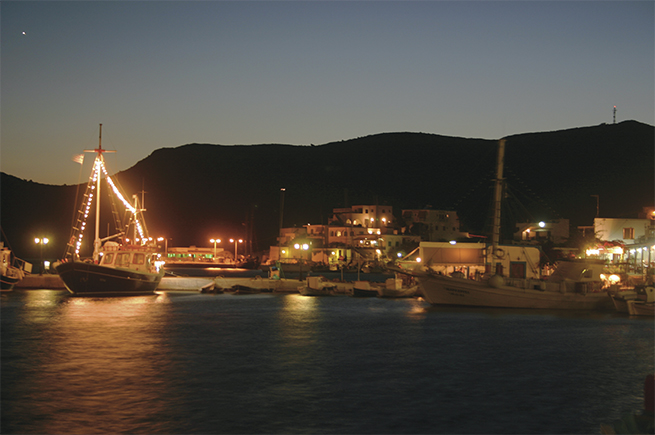 The island has beautiful and clean beaches. The closest to the settlement are Liendou, Kampos and Elena beach. South of the harbor is the beach of Katsadia (sand and almost always without air), while others are Papandria, Hohlakoura, Tourkomnima, Xirokambos, Kamares, Monodendri. Liendou, is the closest beach to the port, just in 10' distance, it is sandy and provides food and drink, as well as Katsadia, one of the most popular beaches of the island, with a sandy beach 20' on foot.
In Lipsi the rhythms of life are relaxed. The clean environment and the friendly and good-hearted people of the island will welcome you and they will make you feel the nostalgia of return!

Agathonisi, a shelter of birds and humans

How to get there (if you do not have an inflatable boat): It is easy to go to  Agathonisi, as it has daily connections with Leros, Patmos, Lipsi, Samos, Chios and through these islands with Rhodes and Piraeus. There is also a large and modern heliport on the island. The windless and tranquil bay of Saint George is a good anchorage for the various boats that approach the island. 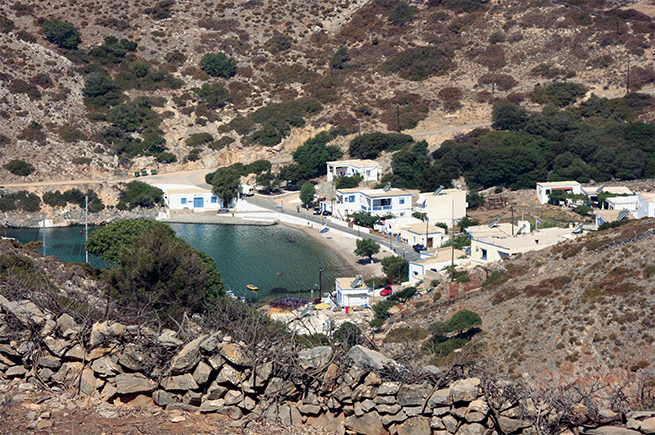 Our third calm and noiseless destination is Agathonisi island, 15 miles NE. An island untouched by time and tourism, authentic and uncontaminated, quiet, small, remoted and without cars. Agathonisi, just 8 miles from the Asia Minor coast, has an area of ​​13.4 km² and a coastline of about 32 kilometers. The main occupation of the inhabitants is fishing and the about 800 tourists who visit the island during the summer. Its touristic development is very slow, mainly because of the difficulty and the high cost of transportation of the building materials. It was only in 1980 that the island was supplied with electric power. In Agathonissi are many fish farms, such as Vathi Pigadi and the windless bay of Katholikon. The island is protected by Natura 2000 as a refuge for rare birds.

Despite the difficult conditions under which residents live, they do not lose their courage, smile and warmth. Megalo  Chorio is the largest and most ancient of the three settlements of the island, hidden and protected from pirates in the old days. The other two settlements, Agios Georgios and Mikro Chorio, have only 15 inhabitants each. From Agios Georgios begins the uphill road leading to Megalo Chorio, which is approximately 500 meters away. From the edge of the bay, the road which leads to Mikro Chorio begins. 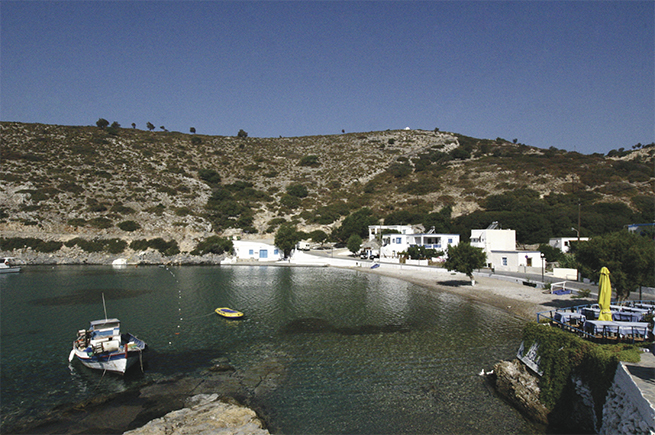 The beaches are clean and the waters are crystal clear, especially in the bay of Agios Georgios. 2.5 km away, is Catholiko, where fish farming units operate. The dirt roads are everywhere easy to walk and the distances are ideal for hiking. The quiet life of the island, the hospitality of the residents, the many natural beauties satisfy even the most demanding visitor.
-The windless and quiet bay of Agios Georgios is a good anchorage for the various boats that approach the island.

For food: Fresh fish, delicious fava (fliskoukoudi), meat of wild goat and local wine. It is worthwhile to sit in one of the picturesque taverns by the sea.

We untied the cable from the mole and sailed away for the return journey. The sea made us the favor to travel in calmness. We adore these small and isolated islands...