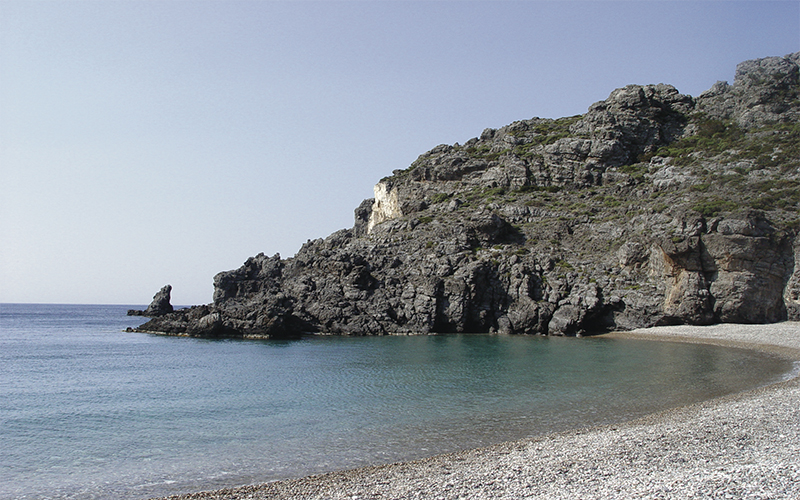 Endless walks in the freshly white painted cobbled streets of Chora (capital) and in the battlements of the Castle, swimming in crystal clear seas, trekking in shady canyons and idyllic waterfalls, sempreviva (a yellow flower that grows only in Kythira) and fresh seafood with ouzo on the beach...

By airplane: From Athens International Airport - Kythira Airport
By Ferry - Boat:
a) From Piraeus (7 hours)
b) From Gythio (2.5 hours)
c) From Neapolis (1 hour)
d) From Kalamata (5 hours)

For centuries, three seas (the Ionian Sea, the Myrtoo Sea and the Cretan Sea), "roam" around this magical island which dressed in white, in the summer "open sails" and travels our minds and souls to paths of untouched beauty. Where the East meets the West in the Mediterranean Sea, facing Kavo Malia, at the southernmost tip of Peloponnese, Kythira flocks in the waves... 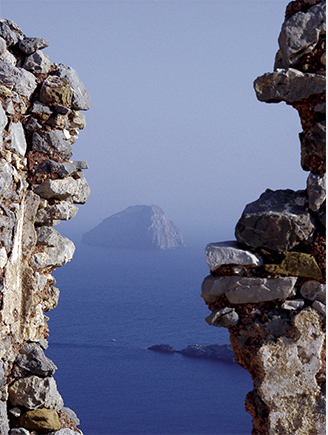 Between the ruins of the Castle is Chitra (or Avgo), the round islet which is associated with the birth of Aphrodite...

Kythira had been in the middle of cultural influences and cultures, but it managed in an enviable way to reconcile Greek tradition with Western culture and to create its own particular social and cultural character. It belongs to the Ionian Islands and although it is far from the other islands of the Ionian Sea, it followed their common historical route. In recent years Kythira became known as Tsirigo. As the myth says, Aphrodite the goddess of Love and Beauty emerged here from the sea, and more specifically at the golden beaches of Palaeopolis, where there was a sacred cult of the goddess. Of course, other islands (such as Milos and Cyprus) lay claim to the goddess Aphrodite, who seems to have passed through them, expressing something different to each one of them. Heavenly Aphrodite, who was representing the pure, eternal, ideal love, free of weaknesses and passions, was worshiped here.

Undoubtedly, in Kythira we will train our legs in the best way. Apart from the walks in Chora, Castle and Mesa Vourgo, as well as hiking in the old watermills, we will discover interesting short or long routes. Some of them are on dirt roads and others on paved or forest paths.

Route A: North of the island, is a very interesting hike that leads from the River to Trifillianika and from there, through an old path, to the ruined Paleochora. Crossing the dry riverbed, we will reach Kastrissianika and Mitata.
Total duration: Approximately 4 to 5 hours.
Why is it worthwhile to see it: Paleochora is the Byzantine capital of the island, built in the 12th or 13th century. It was unseen by the sea, but one could see far from it. Around Paleochora, a deep, steep gorge (Kakia Lagada) is descending, which ends in a lake, a few steps before the beautiful small pebble beach Agia Pelagia. It has 70 churches, meaning that each family had its own, next to which they had built her house. They took water from two rivers. Paleochora, was completely destroyed by the pirates of Ch. Barbarossa in 1537, who killed the inhabitants or sold them as slaves. The few survivors moved to Chora, the new capital of the island. The scenery is overwhelming. 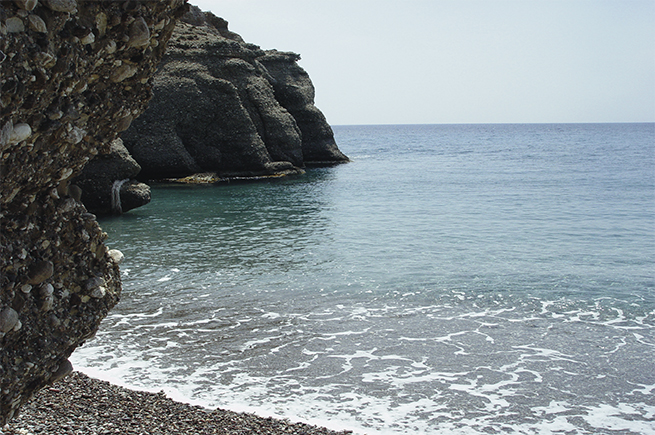 The beach of Limni in Paleopoli.

Route B: Another hiking route to the north end of the island is the one that will bring us, after walking about half an hour, to the lighthouse of Moudari. It was built in 1857 and has a height of 25 m. It enlightened 50 miles distance. It’s a landscape of wild beauty, opposite the peninsula of Malea.

ADVICE: It is good for our hiking trips to start early, because of the heat. It is also good not to do it alone.
In Agia Pelagia, we will be at Venardos Hotel, where its owner and other people with experience, organize such excursions. 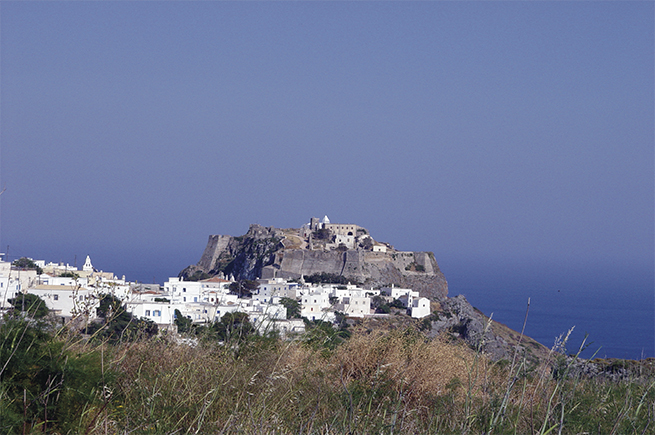 View of Chora and the Castle of Kythira.

Walk in Chora and the Castle

In Kythira, apart from the beguiling beaches, you will especially enjoy the walks in the arched cobbled streets of Chora. It stands high, beside its proud Castle and enchants you with its narrow passageways, its plain houses, but also its mansions with the blooming courtyards and the high walls which were protecting the privacy of the family... Dyed in white and with details in warm colors, such as yellow and blue, with built gardens, decorated with deep red geraniums and elaborate doors with old coats of arms. 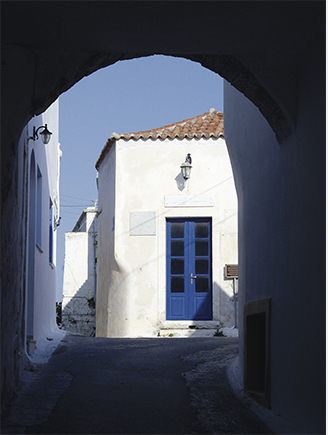 On the main street, small boutiques sell sempreviva compositions, the small yellow amaranth flower that grows on the steep rocks of the island. This settlement developed especially after the destruction of Paleochora by Barbarossa (1537), when the Venetians transferred the capital to Chora, which was considered safer, because the Castle had been repaired a few years earlier. 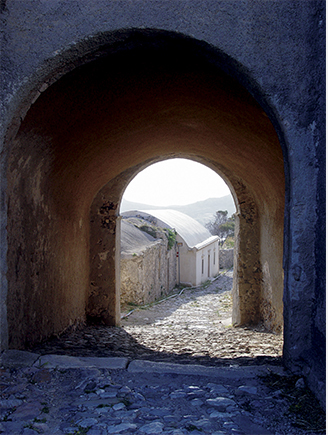 Exploring the Castle in Chora.

Walking through the streets of Chora, we will reach the Castle, which was the seat of the Venetian commander of the island. The Historical Archive of Kythira is housed in the mansion. Among the ruins of the Castle there is a large cistern, a powder warehouse and the temples of Panagia Kastrini or Myrtidiotissa, Panagia Orphanis, Pantokratoras and Saint Ioannis. Interesting is also the Small Archaeological Museum. At the base of the Castle lies the medieval settlement of Mesa Vourgo with the many churches and the imposing mansions, decorated with pebble courtyards, bougainvillea and jasmine. Walking out of Chora up to Gymnasium (Belvedere area) the view of Castro, Kapsali and Mesa Vourgos, is fantastic. 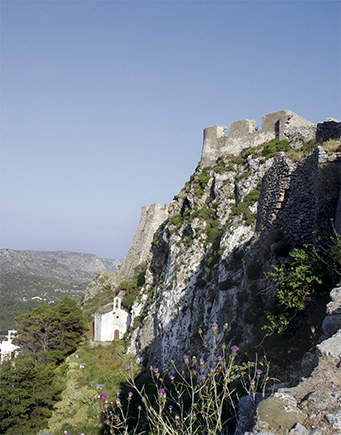 Part of the impressive castle towards the side of Bourgos. 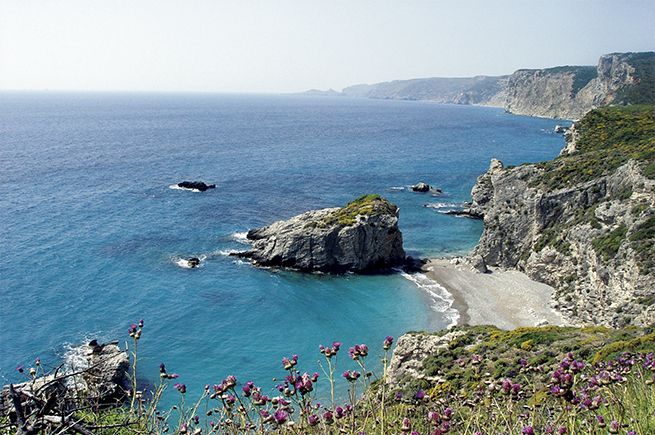 Kaladi, the most famous beach on the island, with blue-green waters.

You must see:
• Chora, the capital of Kythira.
• The Venetian Castle and the Archaeological Museum of Kythira.
• The Monasteries of Panagia Myrtidiotissa, Agia Elessa, Agia Moni, Panagia Orphani, Saint Theodoros and Agios Ioannis.
• The medieval settlement of Mesa Vourgos.
• The Belvedere area, with a great view of the Castle, Kapsali and Mesa Vourgos.
• Kapsali, the island's entertainment center.
• Livadi and the english school of Milapideas.
• The Temple of Ascension in Kato Livadi, where the Collection of Byzantine and Post-Byzantine Art Works of Kythira is housed.
• The impressive bridge with the 13 arches in Kato Livadi.
• The village of Karavas, the source of Amir Ali and the ferrous source "Portokalia".
• Palaiochora and the gorge of Kaki Lagada.
• Kato Chora of Mylopotamos and the Venetian Castle.
• The Cave of Saint Sophia.
• The Waterfalls of Fonissa or Fairy in Mylopotamos.
Potamos, main village of the island.
• Agia Pelagia, a seaside village with tourist development.
• Diakofti, its main port.
• Palaiopoli and the beautiful Avlemona.
• Platia Ammos, the northernmost villages.
• Pitsinades village, with beautifully restored houses. 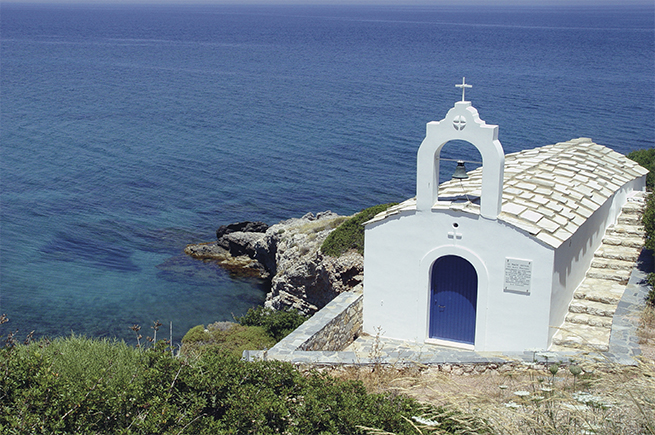 The chapel of Agios Nikolaos next to the turquoise waters of Agia Pelagia.

Discovering the beauties of the island

The thing that really impressed me is that in Kythira you are able to swim every day on a different beach, one better than the other. (The only organized beach of the island is in Kapsali, so do not forget your umbrella wherever you go for swimming!) The pictures that will always accompany me when I remember this trip are the Waterfalls and Neraida, in Mylopotamos. An enchanting landscape between shady plane trees and a green pond with crystal clear waters at its base that challenges you to take a dive... 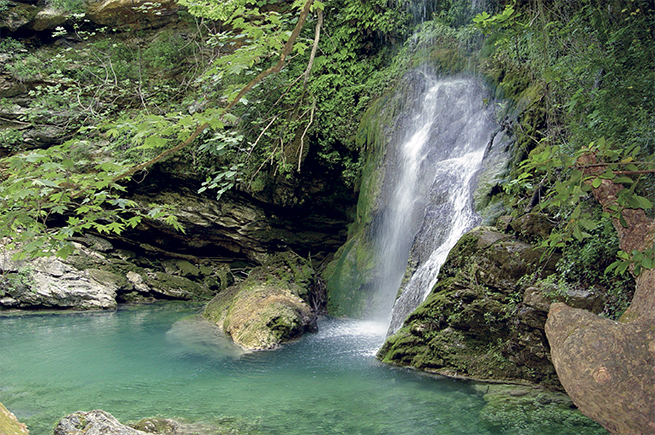 The Waterfall of Fonissa or Neraida with its incredible beauty.

Hiking on the verdant path of the ravine with the old watermills, was of great interest too. One of the watermills is now restored. In the square of Mylopotamos, at the traditional coffee shop, along with the refined Greek coffee, we also tried the famous «avgokalamara», a traditional sweet of the island, as well as «roses» (almond cookies with powdered sugar).
Among the sights of the place is the impressive bridge with the 13 arches, in Kato Livadi, which was built during the British domination (1826). At the same time, the imposing School of Milapideas was built. 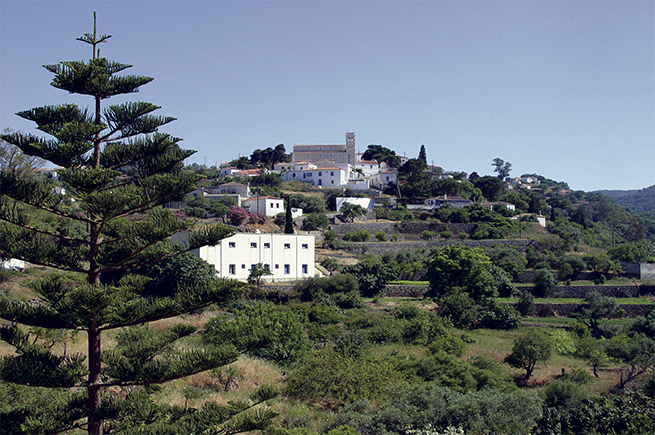 Karavas: one of the most beautiful villages of the island, drowned in green.

In Kythira we will discover beautiful mountain villages, such as Karavas, in the northern part, drowned in green, and Amir Ali's Spring, under the shady plane trees and the running waters. Walking on the verdant path, we will quickly reach the spring of Portokalia. On our return, we will relax for a while enjoying something refreshing at the stylish café-bar which is located there.

In the inland of the island is Potamos, a lively village with a large square and beautiful neighborhood. It is worthwhile to walk in the streets, behind the square, to discover restored mansions and stone arches. Every Sunday morning there is also a bazaar with local producers selling their products and traditional pastries or «ladopaximada» rusks with oil (exceptional). 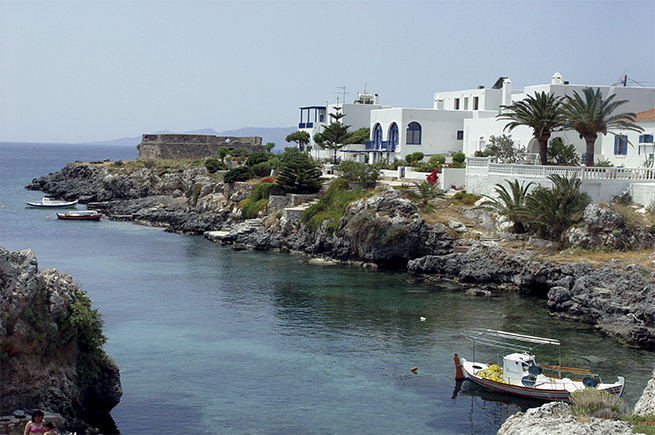 The picturesque small port of Avlemonas. In the taverns we will enjoy fresh fish and seafood.

Of course, we will take a stroll down to the picturesque Avlemonas, one of the most famous holiday resorts of the island, with plenty of accommodation, good fish taverns and beautiful seas nearby. We will also find many beaches in Paleopolis and in Agia Pelagia there are five consecutive beaches with crystal clear waters. Behind the last beach there is a green lake. Here the gorge Kakia Lagada is ending. In Agia Pelagia we will find many hotels and rooms to let. At the beachfront taverns we will enjoy fresh fish and seafood. From the monasteries of the island, the most famous is the Monastery of Myrtidi, founded in the 14th century, at the place where the miraculous icon of Virgin Mary of Mirtidiotissa was found. 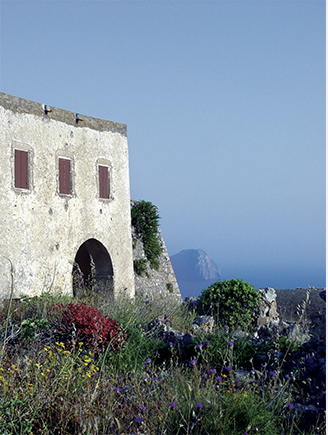 The Castle at Chora.

In the afternoon we will find ourselves at the Castle of Chora or at the Monastery of Aghios Elessas, in order to enjoy the sunset of the island. After a short rest, we are ready for a drink and good music in Kapsali, with the most bars of the island. Looking up, we will feel awe in front of the magnificent view of the illuminated Castle, which shines like a star in the hot summer night...