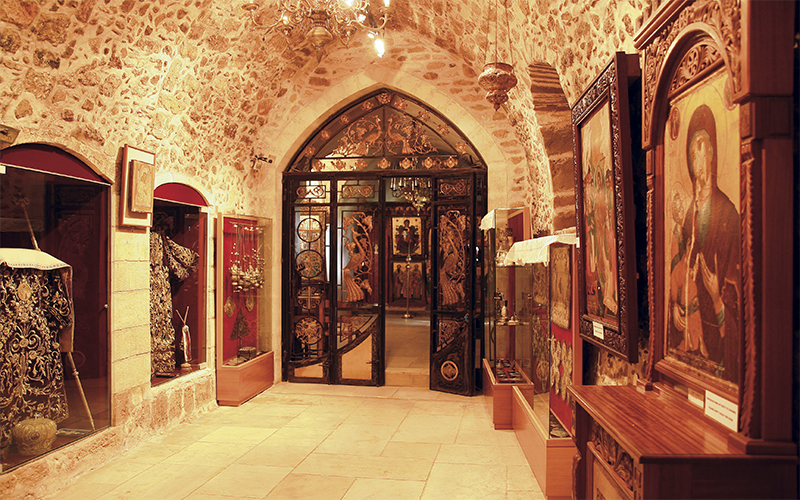 At the eastern edge of the prefecture of Lassithi, between Sitia and Vai, is the Monastery of Panagia Akrotiriani, a castle monastery, guardian of faith and tradition from the Byzantine years that is worth visiting.

How to get there: Sitia has an international airport linked to Athens, Heraklion and Rhodes. In summer, flights are more frequent and in general the Athens-Heraklion air link is denser. From Heraklion airport the bus reaches Sitia in about three hours. To reach Toplou Monastery and its surroundings you will need a car.

It was already lunchtime when the airplane landed at Heraklion Airport and with the first taxi that I found at the entrance of the area, I reached the base of the buses (KTEL), a breath away from the old harbor with the Venetian neoria (arsenali) and the historic fortress of Koules. The route to Agios Nikolaos, or the Saint, as the locals use to call it, was familiar from an earlier visit, as well as the picturesque view of the lake, which is also the most photographed attraction of the city. However, the capital of Lassithi was not the final destination, but one more stop, until catching the next bus in order to take me 65 km to the east, to Sitia. 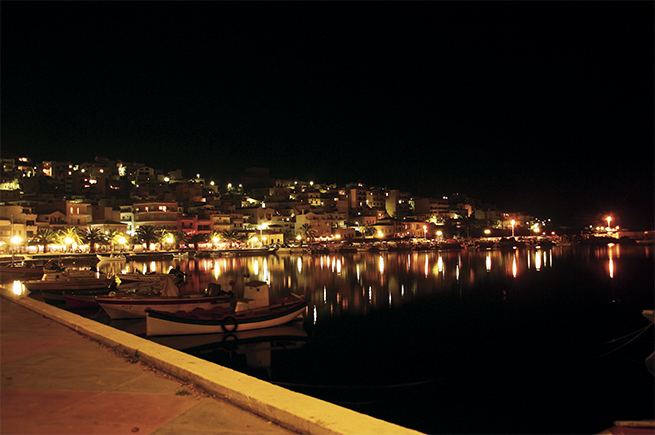 Arriving, the night had spread her veil over the picturesque harbor and after I settled quickly in a central hotel, I began wandering in the narrow streets of the city while the excellent weather of Crete allowed staying the night out. The harbor area is the center of pampering and nightlife. Sitia, gained my admiration and my heart. The next day after a short meal at the hotel I drove with a rental car to my original destination, to the historic Toplou Monastery, 18 km from Sitia. 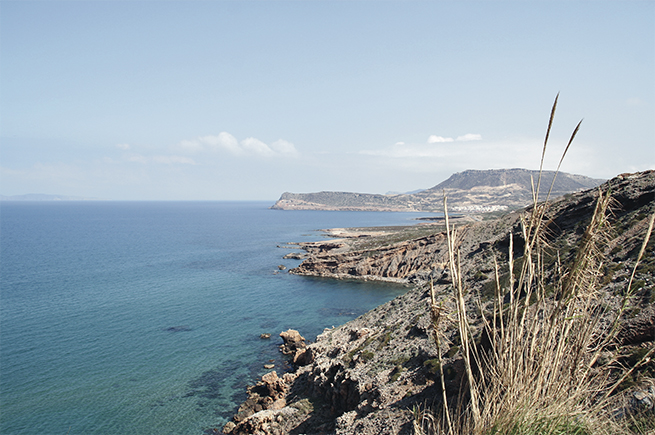 On the way to Toplou Monastery.

Arriving at the outside area of the monastery, three parked cars with foreign plates waited for their owners, who were watching the walls of the castle and the bell tower. 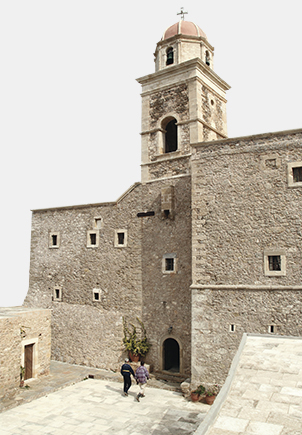 The walls of the monastery, which look like a fortress, are ten meters tall.

Shortly afterwards, the abbot of the monastery, Archimandrite Philotheos, arrived from the surrounding estates. After crossing the courtyard, I climbed the steps that led to the reception area for visitors and for those who work at the monastery. His welcome was cordial and the traditional coffee with the cookies, did not take long to be seen on the table, accompanying our discussion about the worldly but also the monastery's issues. However, a reference to the past by the abbot himself would help me to understand better the historical, and not only, value of this sacred place. 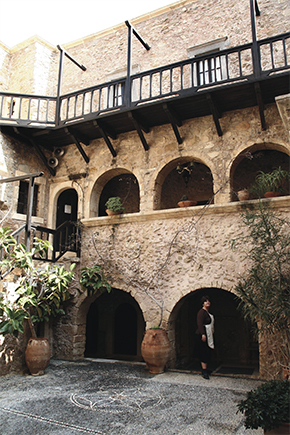 Stone and wood in perfect harmony.

The foundations of the Toplou Monastery date back to Byzantine times, more specifically to the 14th century, and its real name is Monastery of Panagia Akrotiriani, after its position on the eastern edge of Lassithi. The name Toplou was given to the monastery by the Turks, who occupied Crete in the 17th century, evicting the once dominant Venetians. The word “Toplou” comes out of the "top", which in Turkish means "cannon". During the Venetian occupation, the conquerors, in order to avoid a possible Turkish invasion, had equipped Megalonisos  at several locations, including the monastery, which had already suffered from the catastrophic raids of the pirates, with cannons. The monastery started to take its present shape at the beginning of the 16th century with the help of the Venetian senate, which allocated the very large amount of 200 ducats, in order to create a castle-monastery, to supervise the area. 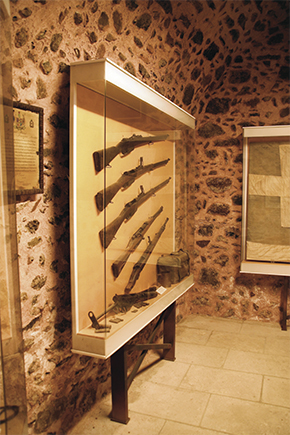 Additions to the museum.

The building is like a fortress, with small windows and sloping reinforced walls that reach a height of 10 meters. The inner part of the main church has been preserved since the 14th century, with some of its parts being reconstructed in the 15th and the beginning of the 17th century. Many of the treasures that existed were stolen by the defending Venetians while they were retreating, so as not to fall into the hands of Turks. However, today the monastery, houses an extraordinary collection of icons and religious heirlooms from the Byzantine, Venetian and Ottoman periods, as well as from the modern era.

Passing the threshold of the castle of Sitia.

I asked from Father Theophilos to visit the museums of icons and of the copperplates and he responded with great joy, giving me the possibility to virtually travel to unique places through the rare pieces of the religious art of the past centuries. The historical icon of "Megas ei Kyrie" of the well-known 18th century painter Ioannis Kornaros, the garment of the national martyr, metropolitan of Smyrni Chrysostomos, the impressive manuscripts discolored from the time and the rifles from the old battles, are some of the most important heirlooms of this museum. 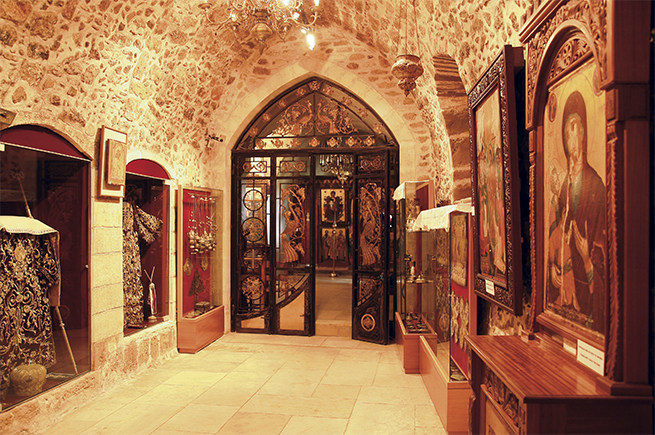 The courtyard, a combination of stone and wood, and the dining room, painted with the fresco painting method, complement the monastic scenery that takes the visitor to other times. At one point, a courteous gentleman, who, as explained by father Philotheos, is the wine expert with whom he collaborates at the organic farms that he has organized, adds: "The monastery has a winery and an olive press. We make wine and oil in organized production units". Then, we went with the other monk, father Zacharias, to the production facilities and I was really impressed by the organization and the cleanliness of the space.
The Monastery of Panagia Akrotiriani is a living organism that besides keeping faith and religious tradition, produces goods that are interweaved with Greek history and culture. The vineyards and the olive groves around the monastery's premises proves it, producing wine of exceptional quality and oil with the Toplou label and as father Zacharias says, all this, is the work of the abbot himself, who is the soul of the monastery. 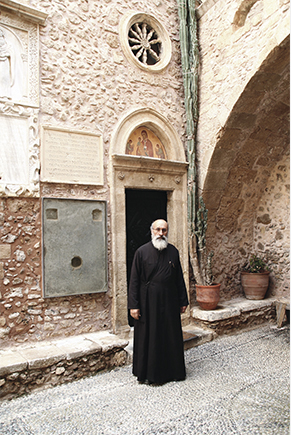 I return to the monastery and I find Father Philotheos having a conversation with the vine specialist. I greet him and I thank him for his great hosting. He farewelled me with cordiality and I headed to the car to continue my journey.
Leaving Toplou Monastery with its tall bell tower, I made a promise to myself that if in the future, for some reason I come back to Lassithi, I will certainly go again to see the indescribable beautiful images and to feel the rejuvenate peaceful atmosphere of the monastery. The road to the Palm Forest, with the tropical aura and to Kato Zakros, with the remnants of the Minoan civilization are waiting for me to visit. 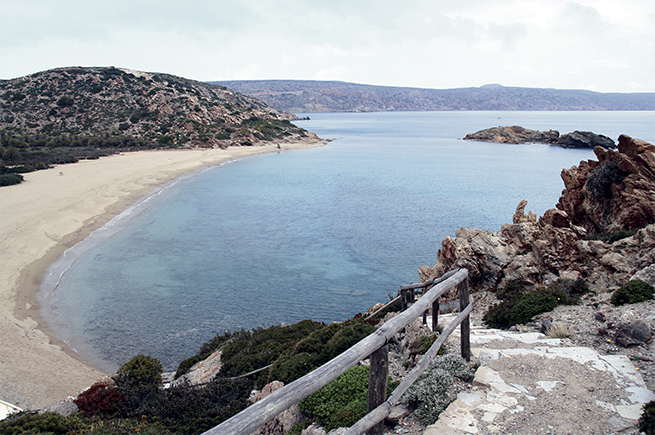 Palm forest, in the tropics of Lasithi.

Excursions: Very close to Sitia and the Toplou Monastery, lies Vai with the Palm Forest, the largest of its kind in Europe and its unique beach that refers to tropical destinations. Also, a beautiful route leads to Kato Zakros, where the archaeological site with the remnants of the Minoan period is located very close to the beach with the taverns. 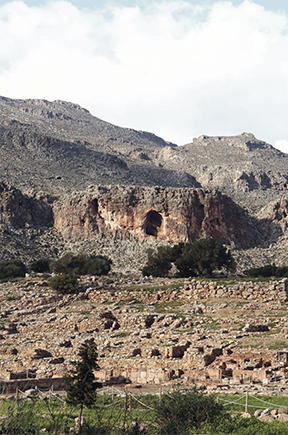 Kato Zakros, the remnants of the Minoan town.