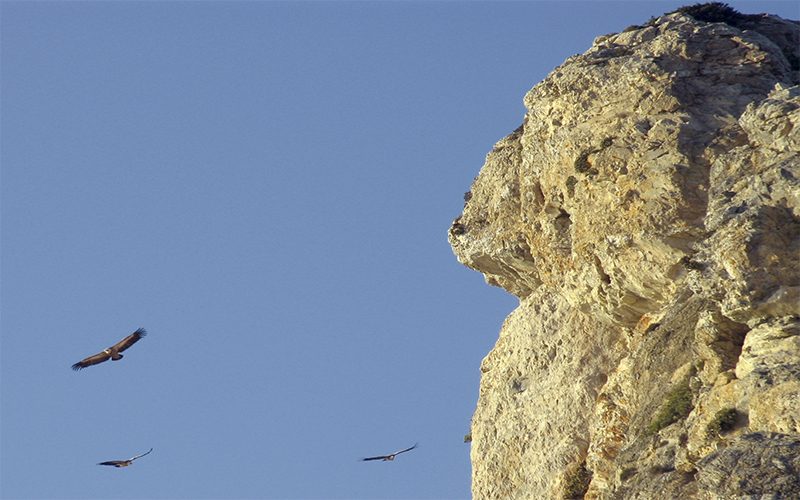 In addition to exercise and adrenaline, the climbing sport gives the climber the chance to enjoy a rare side of nature that few have seen, admire and appreciate the landscape as a whole and perceive the succession of habitats. Caution! We are not the only ones using these rocks!

Numerous animals and plants have chosen this particular habitat, but for different reasons.

Beware of the nests!

The cliffs of Greece are areas inaccessible to most people, but also to many of the natural predators. For this reason, they are an important refuge and offer valuable isolation to many species. Rare species of birds find slits and protrusions to support their nest while bats live and reproduce in caves and holes.

In addition, the rocks and cliffs, although seemingly barren, are the predominant habitat of endemic and rare plants that can grow on minimal soil and withstand severe drought and strong winds. 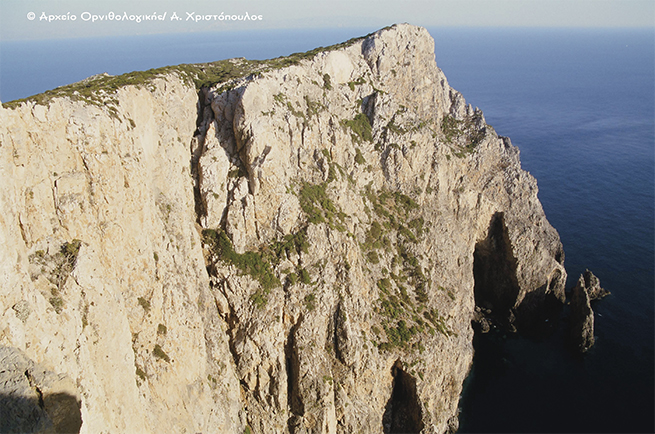 Birds, especially predators, nestling on the rocks, are vulnerable to disturbance from human presence. Such discomfort affects the successful reproduction and can prevent birds from nesting or lead them to abandon their nests.

Later on, when they breed or have newborns, this discomfort make parents to get up from their nests with the result of exposing the eggs or newborn chicks to the strong sun, cold and predators.

Let us not forget that the predators, especially the eagles, nest in the same places every year. So the destruction of a nest and / or the inconvenience of adult birds can have serious consequences, especially at the islands where the available nesting places are very rare. 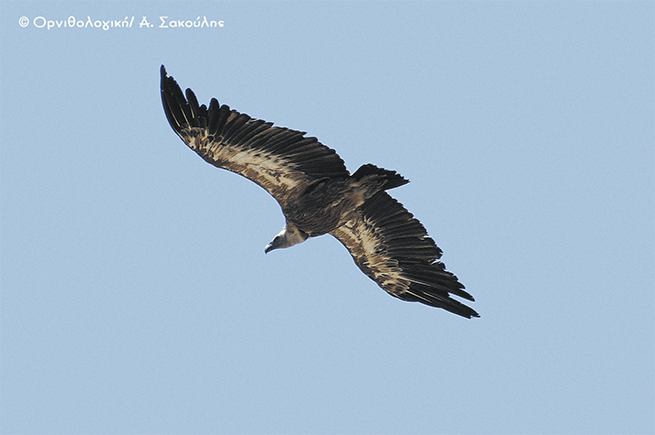 The "wild climbers" in Greece

All birds of prey are protected by Greek and international legislation. Most of them can be found nesting in the islands of Greece from March to July, such as the very rare Bonelli’s eagle (Hieraaetus fasciatus) and the Long-Legged Buzzard (Buteo rufinus), as well as falcons such as the Common Kestrel (Falco tinnunculus) and the Peregrine Falcon (Falco peregrinus).

Other species nesting on the rocks at the same period are the owl (Athena noctua), the horned owl (Bubo bubo), while griffon vultures (Gyps fulvus) are nesting in January on a few islands. The exception is the Eleonoras Falcon (Falco eleonorae), a species of falcons which are nestling later, from the beginning of August to October.

In the Aegean Sea there are more than 4,000 couples of Falco eleonarae, which makes about 75% of the world's population and therefore this is the most important species hosted in Greece.

Unfortunately, the breeding season of many birds is also the most suitable one for climbing, having as a result the discomfort to be one of the most important threats to them. 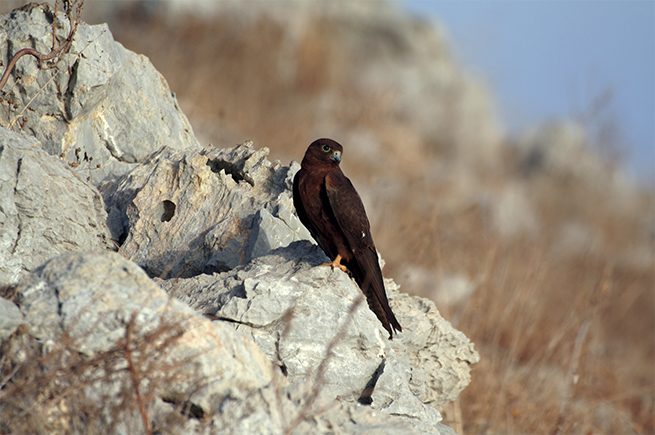 Climbing is fun, even more when combined with the unique nature of the Aegean rocks.

That's why we all need to remember the following:

• Avoid climbing on cliffs as much as possible during the time birds breed (April to October).
• Make sure that no nests have been recorded in the area you chose; please consult the NOC and EOS researchers before you decide climbing. Get informed by the locals if they see predators in the area and check for spikes and twigs in the path you have chosen. Usually, you do not need to change your cliff route but only to avoid the sensitive area around the nest (about 500 m from an eagle nest).
• If, during a climb, you see birds of prey rising up in the air, or if you bump on a nest, go away as soon as possible. If there are small ones in the nest, do not approach, as they may leave the nest before they are ready and cannot return to the nest later.
• Do not leave any traces on your trail, climb silently and discreetly.
• Do not light up fires and do not use strong torch lights, when entering caves and deep slits, as it may annoy birds and bats.
• By opening up a path, do not root out more plants than absolutely necessary because they might accommodate small and isolated populations of rare species. 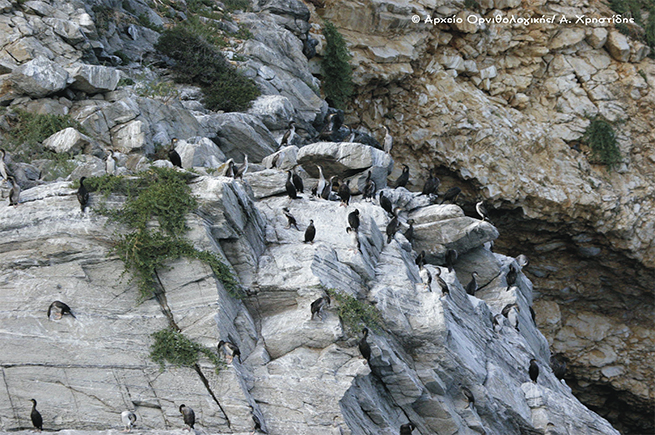 Try not to poison nature!

The use of poisoned baits to control the population of alleged "harmful" animals (foxes, asbestos, wolves, etc.) was a major threat to wildlife as a whole.
Especially the birds of prey, although they are usually not the target of such attempted extermination, are seriously threatened, because when searching for their food they might discover and consume poisoned carp.

Poisoned baits are death traps for rare birds and animals. A single poisoned corpse can cause death to a whole colony of vultures. In the past, well-known couples of vulture, black-eyed vultures, white-eagles, king-eagles and golden-eagles disappeared from their territories, due to the use of poisons. Today, some of these species maintain small populations in the Greek area. Their possible mass killing by poisoning also means their disappearance from Greece.

What to do if you find a poisoned corpse or placed bait: 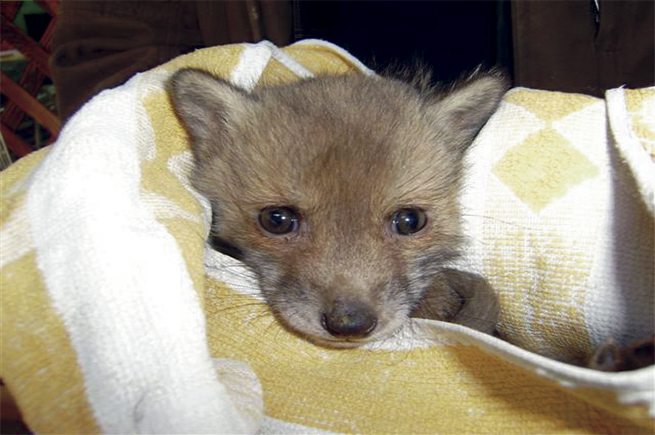 What to do if you find injured birds, reptiles or mammals:

Chicks
In the spring and early summer, you are most likely to find chicks that look abandoned and want to help them. Beware, though! Not all babies need our help! Often the parents are somewhere around and the best thing to do is place the baby somewhere high and leave it in peace.

The ANIMA website provides detailed instructions for each chick, about what kind of food it can receive and how to take care of it until you contact a health care center.

Turtles
Often there are turtles, hit by cars or agricultural machinery, with a broken shell. Carefully transport the animal to prevent the fracture from getting worse and place it inside a carton with some newspapers on its floor. If the wound is dirty, you can rinse it with some warm water. Then cover with gauze or a cloth to prevent flies etc.

Mammals
Foxes and ferrets bite badly. Avoid their teeth at all costs! Hedgehogs are less dangerous. Throw a thick cloth, jacket or blanket over the animal. If it is quite lively, the cartoon is not suitable. Find a cat or dog transport cage or two plastic "bunch crates" and place them one above the other.

Newborns
If you find a newborn baby (fawn or petticoat, bunny, ferret, hedgehog, etc.), do not touch or move it if you are not sure it is abandoned. Especially the kites, the mother often leaves them alone for many hours, and she visits them at dusk to breastfeed them. If, of course, the animal is injured, full of parasites and looks sick, then it needs help and you need to contact a health care center.

Birds
If an adult bird cannot fly and tries to avoid us, then it almost always needs help. Quickly find a carton, lay in it newspapers or kitchen paper towels and open small holes. The size of the carton must be such that the bird can stand upright but cannot make unnecessary movements. If you cannot find a box, you can gently wrap the bird on a towel or blouse (as if it is in a sack) or put it in a backpack after creating the necessary space. Grasp the bird with a cloth avoiding the beak and nails if it is a predator and the nose if it is a heron or a seagull. Place it in the box after carefully giving it some water at a natural temperature. Leave the box in the quietest part of the house, warm if it is winter and cool if it is summer.

Contact Immediately with Ornithology or ANIMA to give you more guidance. Any other handling of the bird from you may be fatal for his life. 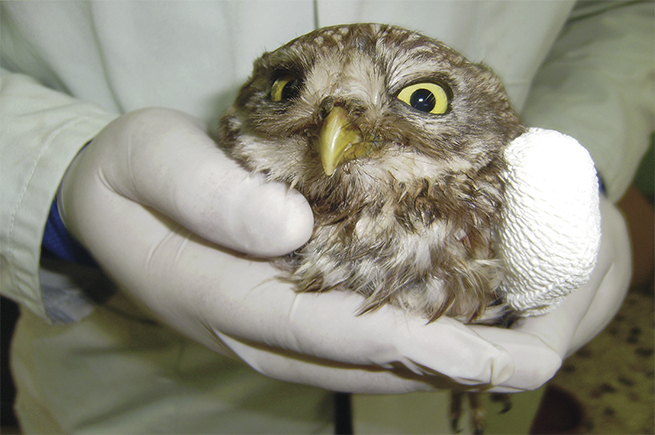 And do not forget:
The purpose is always to return the wild creature to its natural place and to reintegrate it into the wild. If you keep the animal more than necessary, his re-insertion will become impossible and in most cases will have a bad end. 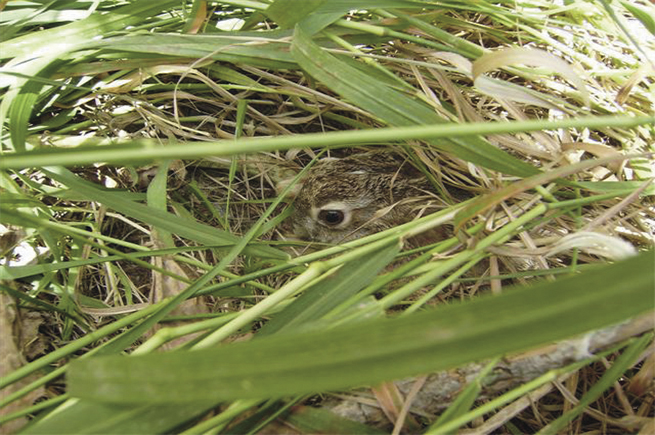