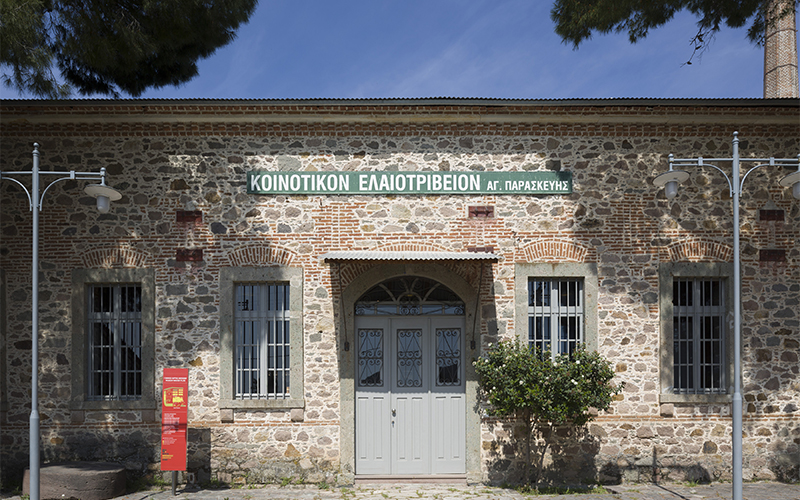 The Museum of Industrial Olive Oil Production of Lesvos aims at presenting the industrial heritage of the island, not only as far as oil production is concerned but also in the wider field of technological development and the history of production, as well as projecting it against its architectural, social and cultural background.

The Museum of Industrial Olive Oil Production in Lesvos (MVEL) in Aghia Paraskevi on the island of Lesvos, belongs to the Network of thematic Museums of technology created by the Piraeus Bank Group Cultural Foundation (PIOP) and serves to complement the Museum of the Olive and Greek Olive Oil in Sparta. It is housed in the premises of the old communal oilmill, the Municipality of Aghia Paraskevi having ceded their right of use to the Foundation.

The project of the museum was included in the North Aegean Regional Operational Programme of 2000-2006 and was funded by the Third Community Support Framework and Piraeus Bank.

The Aghia Paraskevi complex has been turned into “a museum of itself”, both its architectural and mechanical features having been restored to their original condition. The surviving historical equipment is highlighted in an exemplary manner by means of its “demonstrative” functioning and its framing with digital media.

One can witness the development of the various machines, while special emphasis is given to the changes that the introduction of mechanical power brought to the process of oil production. In the main building the three basic steps of the oil production process (crushing the olives, pressing the olive pulp, separating oil from water) are shown, while reference is made to the auxiliary operation of the flour-mill. 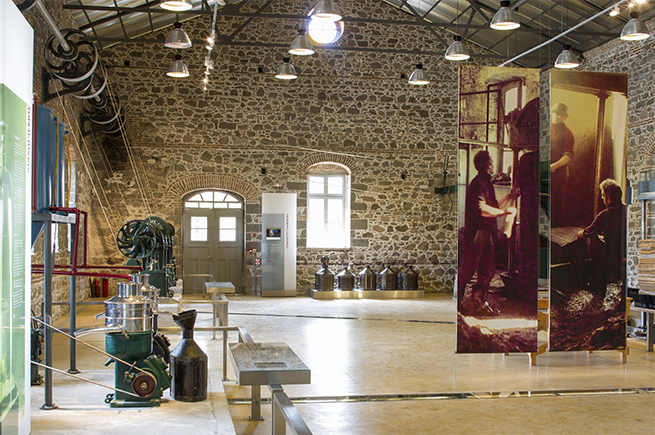 The former storage areas of the olive crop are used as auxiliary exhibition halls, in which exhibits present the human factor involved in oil production. The larger storage areas hold detailed exhibits of: a) the history of the communal oil-mill of Aghia Paraskevi, noting especially the communal ownership of the mill – a quite novel development for the time and its effects on the social and economic structure of the area; b) the mechanization of oil production in Lesvos; and c) the wider socio-economic background. In the smaller storage areas the full cycle of trades involved in oil production is presented.

The Museum has also a hall for hosting various types of events, a café, and a small open-air theatre.

The Museum of Industrial Olive Oil Production of Lesvos aims at presenting the industrial heritage of the island, not only as far as oil production is concerned but also in the wider field of technological development and the history of production, as well as projecting it against its architectural, social and cultural background.

General: € 3
Concessions: € 1.50
Groups: It is advisable to contact the Museum in advance, in order to obtain better service.
Disabled persons: There is no admission fee for disabled persons.
Groups should definitely contact the Museum in advance to make the necessary arrangements.
Photography, Filming: Amateur photography and videotaping is permitted. Those wishing to take photographs or film the exhibits for professional purposes should obtain a special permit from PIOP.