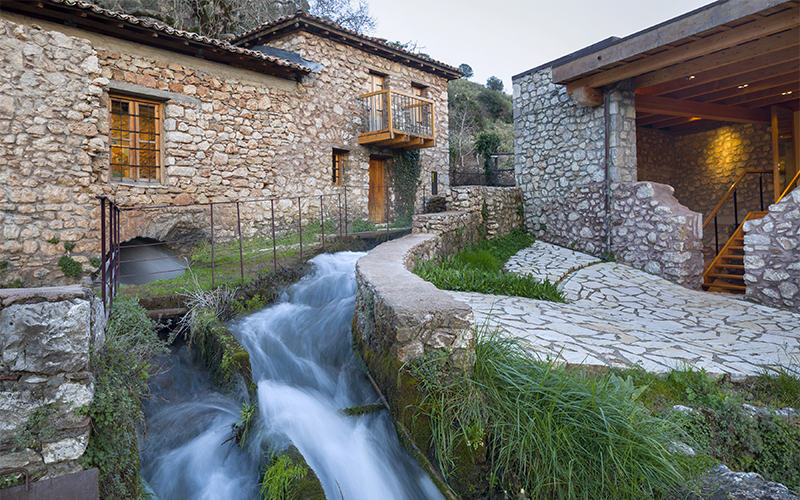 The Open-Air Water Power Museum in Dimitsana (YMY) highlights the importance of water-power in traditional society, presenting the basic pre-industrial techniques that use water as the main source of energy for the production of various goods.

In the midst of dense vegetation and abundant running water, installations and water-powered equipment have been restored in order to meet the operational requirements of the museum. Each of the restored traditional workshop buildings houses a permanent exhibition, whose theme is relevant to the workshop’s original use. The museum opened to the public in the summer of 1997.

The first building houses a fulling-tub and a watermill. Here the visitor can throw some corn seeds into the hopper and observe as they are ground by the millstones and fall into the flour vat. The adjacent room with the fireplace served as the miller’s house. Outside the mill a makeshift shelter has been constructed, such as the one that used to cover the raki still, which was set up outdoors after the vintage, for the production of tsipouro from the grape marcs.

Located exactly opposite is a two-storey building, the tanner’ s house, which today houses museum’s small café. Next to this, at a lower level, is the tannery; its interior has been divided into several “zones”, each corresponding to a specific stage in the processing of the skins. The first zone is for the “waters”, lime and other preparatory tasks. In the next zone are the vats (limbes) used for tanning. A well-ventilated zone is reserved for the hanging and drying of leather in the shade. Finally, there is also a well-lit corner for the post-tanning process of currying. 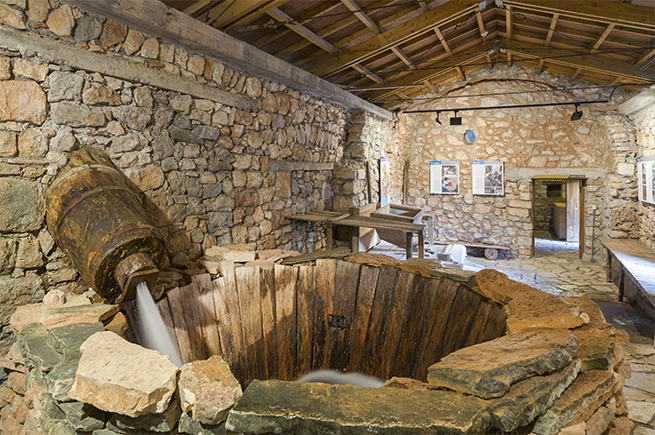 A cobbled road leads to a flat area in which a natural tank is formed, and down to the gunpowder mill. Dimitsana was one of the many villages that knew how crude saltpetre was collected, and turned it over to the Turks in lieu of tax. During the Greek War of Independence, the inhabitants of Dimitsana were active in supplying the fighters with the essential material for ammunition. ”We had powder”, wrote Theodoros Kolokotronis; ”Dimitsana made it.” Gunpowder is an important element of the area’s cultural identity and is kept alive in the memory and narratives of the people in these areas. The Open-Air Water Power Museum showcases exactly this historical identity by reconstructing the gunpowder mill with swingles (kopania), used in Dimitsana during the War of Independence and until the early 20th century, while at the same time preserving the specific technology for gunpowder production, which had become extinct in Western Europe since the 18th century.

The Open-Air Water Power Museum also features a multi-purpose hall. After exploring the Museum, the visitor may ramble through the Lousios gorge.

The Open-air Water Power Museum was created by the Piraeus Bank Group Cultural Foundation (PIOP) and belongs to the Network of thematic Museums of technology of the Foundation. It was included in the Regional Operational Programme of the Peloponnese and funded by the Second and Third Community Support Framework and with the support of Piraeus Bank.

General: € 3
Concessions: € 1.5
Group: It is advisable to contact the Museum in advance, in order to obtain better service.
Disabled persons: There is no admission fee for disabled persons. The Open-Air Water Power Museum is situated outdoors, in the natural landscape of the Lousios river valley. Consequently, access to disabled persons is difficult and requires prearrangement by the Museum.
Photography, Filming: Amateur photography and videotaping is permitted. Those wishing to take photographs or film the exhibits for professional purposes should obtain a special permit from PIOP.